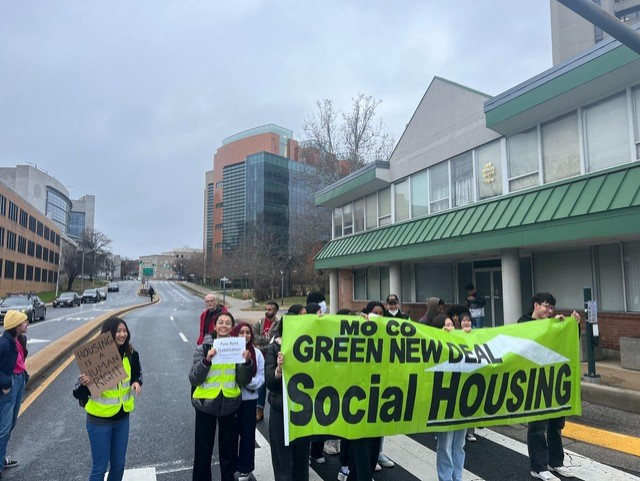 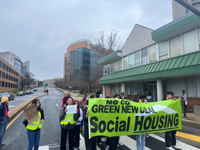 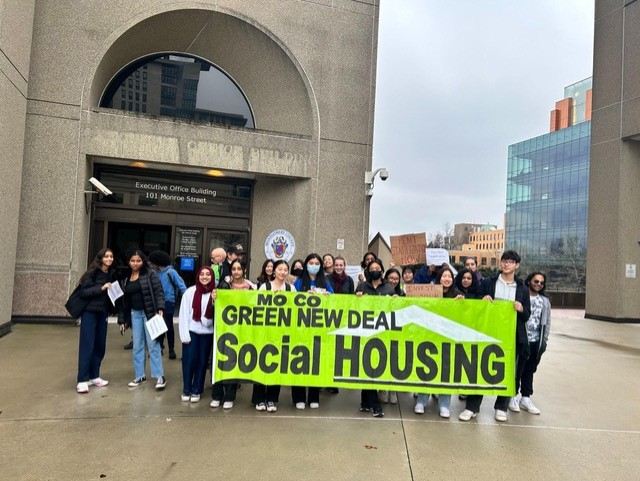 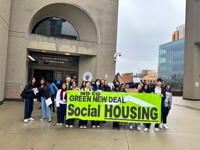 About 20 BIPOC high school students stopped traffic on Jefferson Street between the County Executive and Council buildings in the afternoon on Dec. 7.

The students, Montgomery County Green New Deal for Social Housing interns, blocked traffic as they marched up Jefferson Street to the County Council offices to deliver a letter they all signed to Valeria Carranza, the Chief of Staff for the new Council President Evan Glass. Before marching up Jefferson Street, the students chanted loudly and marched into the lobby outside the office of County Executive Marc Elrich to deliver the same letter to Debbie Spielberg, Elrich’s Special Assistant.

The students sought to call attention to the affordable housing and climate change crises facing the county. As the students said in the letter, they are concerned with “the imminent and interlocking problems facing [the] county in social and climate justice and especially how they intersect with the ongoing housing crisis because [they] want to be able to live in the county [they] are growing up in.”

According to the letter, the students delivered the letter “to call upon the council to urgently pass temporary rent stabilization (Expedited Bill 22-22) to ensure families and community members don’t get evicted and displaced over the holidays.”

In the letter, they also called for the council “to invest in social housing as one of the longer-term solutions to address the ongoing housing crisis, specifically by investing in the county’s [preexisting] Housing Production Fund.”i

Madison Watts, a tenth grader at Rockville High and a MOCO Green New Deal Housing intern who recently testified to the DC Council, said “I have severe concerns for the social housing crisis in Montgomery County, which is closely connected to the climate crisis. Social housing is a major issue that many people are impacted by, and not getting the proper funding will be detrimental to Montgomery County residents.”