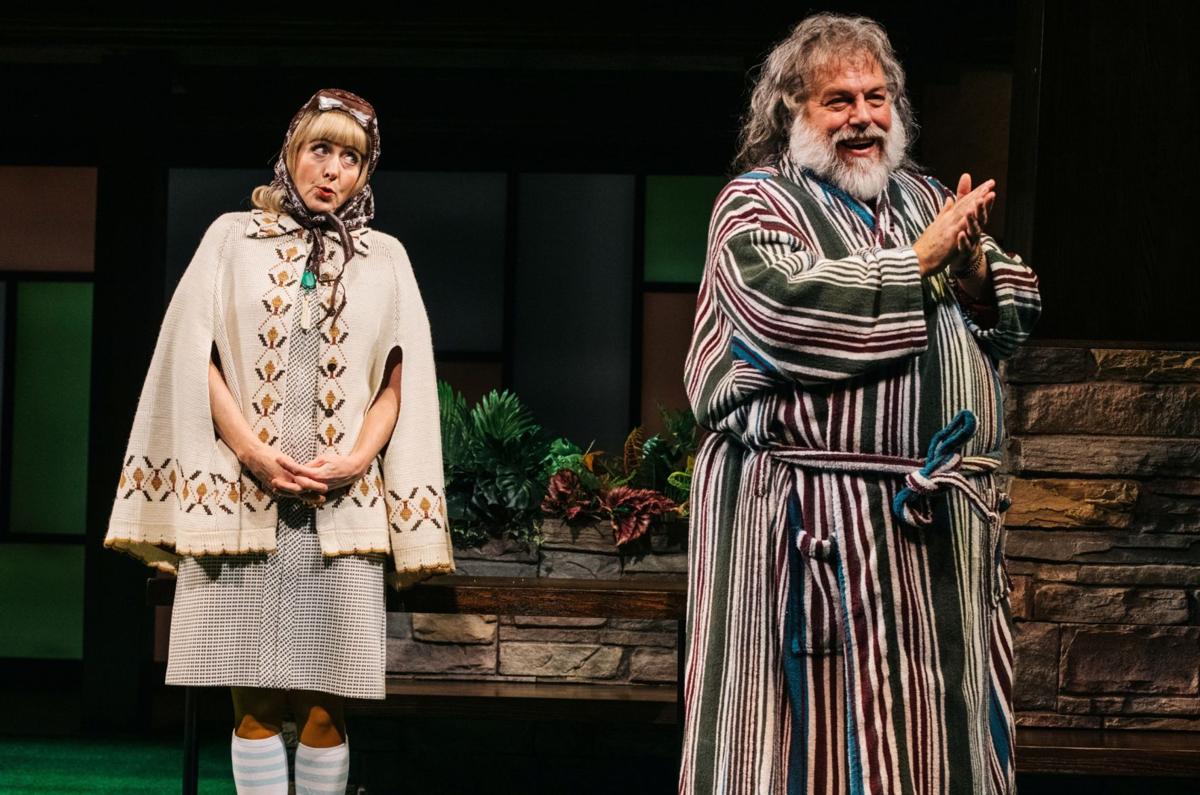 “The Merry Wives of Windsor” runs through the Folger Theatre until March 1 and will be the last production at the venue for some time, as the Folger Shakespeare Library undergoes renovations. (Courtesy Photo) 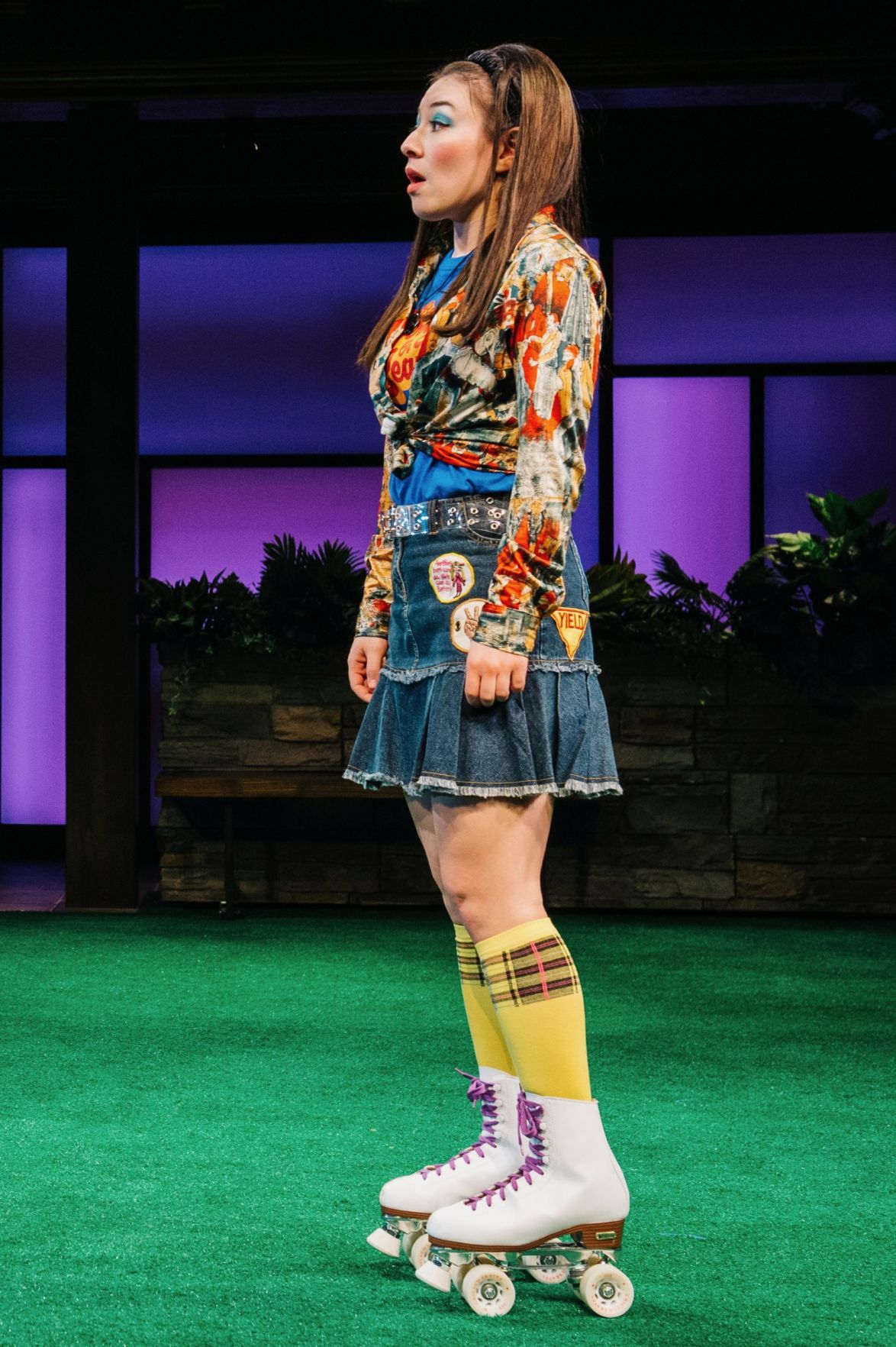 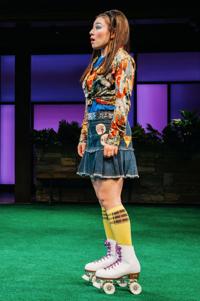 The current production of the Folger Theatre’s “Merry Wives of Windsor” includes a 1970s flare in style due to the outfits and mystic. (Courtesy Photos)

“The Merry Wives of Windsor” runs through the Folger Theatre until March 1 and will be the last production at the venue for some time, as the Folger Shakespeare Library undergoes renovations. (Courtesy Photo)

The current production of the Folger Theatre’s “Merry Wives of Windsor” includes a 1970s flare in style due to the outfits and mystic. (Courtesy Photos)

Go-go boots, miniskirts and bell-bottom trousers. A background of multi-colored square panels bordering on the psychedelic slapstick and one-liners.

We describe not the return of “Rowan and Martin’s Laugh-In” from its TV Land hiatus, but the current production of the Folger Theatre’s “Merry Wives of Windsor,” 1970s style. This period update of the Shakespeare comedy, directed by Aaron Posner, has many hits but also a few misses.

The show is divided into two halves separated by an intermission. The first half, though often clever, sometimes seems to wander a bit as the 1970s setting is established. Happily, the second half is outstanding: with the period setting now established, the performance entirely takes wing, making the show as fine a production of the play as one could wish.

The plot involves Sir John Falstaff, one of Shakespeare’s most famous and enduring characters, and also one of the few who appears in more than one of The Bard’s plays. Initially introduced in “Henry IV” parts one and two, “The Merry Wives of Windsor” takes Sir John out of the historical dramas. Instead, it places him in a comedy in which he tries to court two married women, the “merry wives of Windsor,” using romance (or Falstaff’s absurd notion of it) to try to gain financial advantage.

The production’s greatest strength is its Falstaff. Played brilliantly by Brian Mani, the lovable rogue is present in all his glory: debauchery with a sympathetic air as he proves his resilience in the face of multiple setbacks to his dubious schemes. However, Falstaff’s presentation is, in the view of this reviewer, indicative of the hits and misses of this experimental production. It is fabulous when Falstaff is dressed in a leisure suit and fancies himself a part of, presumably, the swinging London scene. Yet Falstaff in a tie-dyed T-Shirt? This is something of a misfire.

The scene in which Falstaff dives into a large rubbish bin, instead of the usual basket of soiled laundry, is very funny. However, changing the Shakespearean text to have the actors call it a “trash basket” may take the show a bit far away from the original Shakespearean text for some.

Textual quibbles aside, Mani delivers Falstaff’s lines with aplomb, especially in speeches in which he humorously recounts the indignities he has suffered: “Have I lived to be carried in a basket . . .  and to be thrown in the Thames? . . . you may know by my size that I have a kind of alacrity in sinking.”

Additionally, Falstaff’s scene with masked forest tormentors towards the end of the play is especially funny and successful, and it is perhaps not accidental that this is a scene in which the 1970’s atmosphere (and costumes) are less noticeable.

Another standout performer is Kate Eastwood Norris, who plays the servant Mistress Quickly. Actress Norris delivers her lines with humor, with an ability to make Elizabethan language sound natural, and with a gift at performing physical humor. She is also able to make occasional additions to the Shakespearean text seamlessly; at one point, she addresses the audience directly to explain her thoughts. When a character on the other side of the stage says, “What was that?” She responds, “Oh, that was an aside!”

There is a subplot involving Anne Page, daughter to the aforesaid Mistress Page: her two parents have different ideas from each other about whom she should marry, while she is in love with a third: Fenton (Dante Robert Rossi). Played by Linda Bard, Anne handles a scene well in which she roller skates in 1970’s garb of knee socks and denim miniskirt from suitor to suitor. The aptly named Bard also recently appeared in Folger’s “The Bardy Bunch” (running one performance only) in the dual roles of Cindy Brady and Laurie Partridge in a presumably Shakespeare-influenced 1970’s homage to “The Brady Bunch” and “The Partridge Family!”)

The Folger Theatre offered a recent production of “Love’s Labours Lost” set in the 1930s which was well-received. In the “Merry Wives of Windsor” staging, the Folger continues this Shakespeare-in-a-different-time approach.

The current show may also serve as a guide for the future: when re-setting the plays in a different time is done in a subtle way, it can work admirably, perhaps even bringing out untapped themes within the play. When the approach is too deliberate and heavy-handed, however, it is a distraction and may also make the production seem more like a satire than a retelling.

“The Merry Wives of Windsor” runs through March 1. Shakespeare fans should note that this will be the last Folger Theatre production at this historic theatre venue for quite some time, as the Folger Shakespeare Library is about to undergo significant renovation. Folger productions for the upcoming season will be performed in other locations in Washington, D.C.