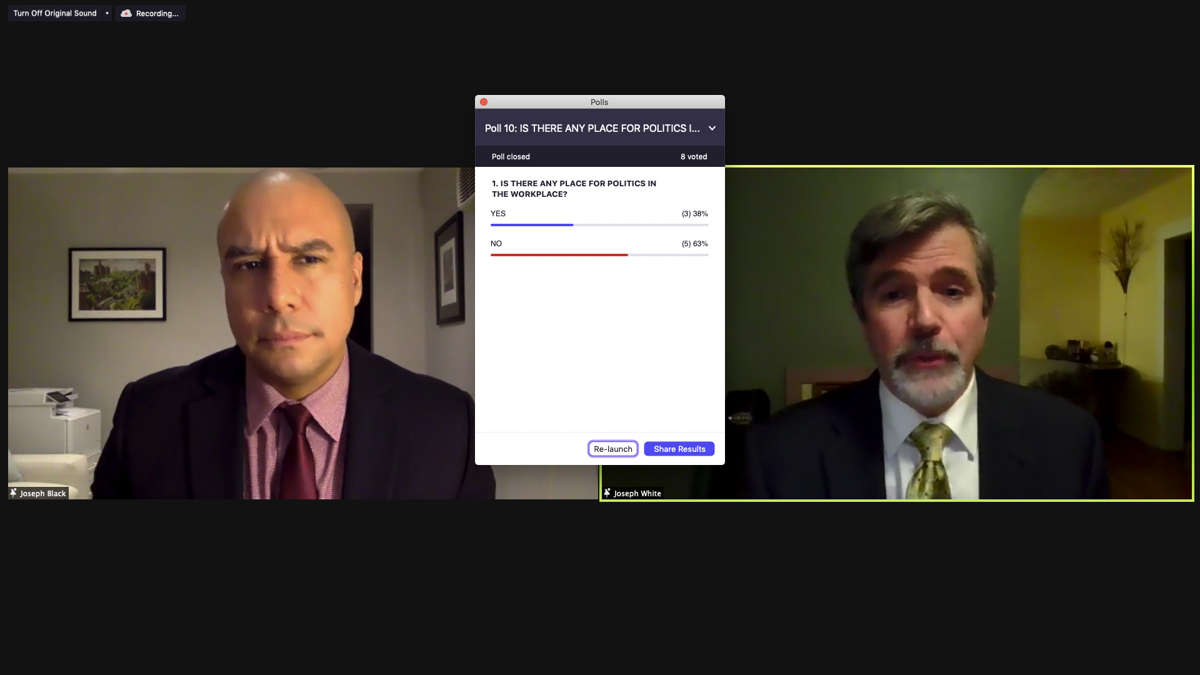 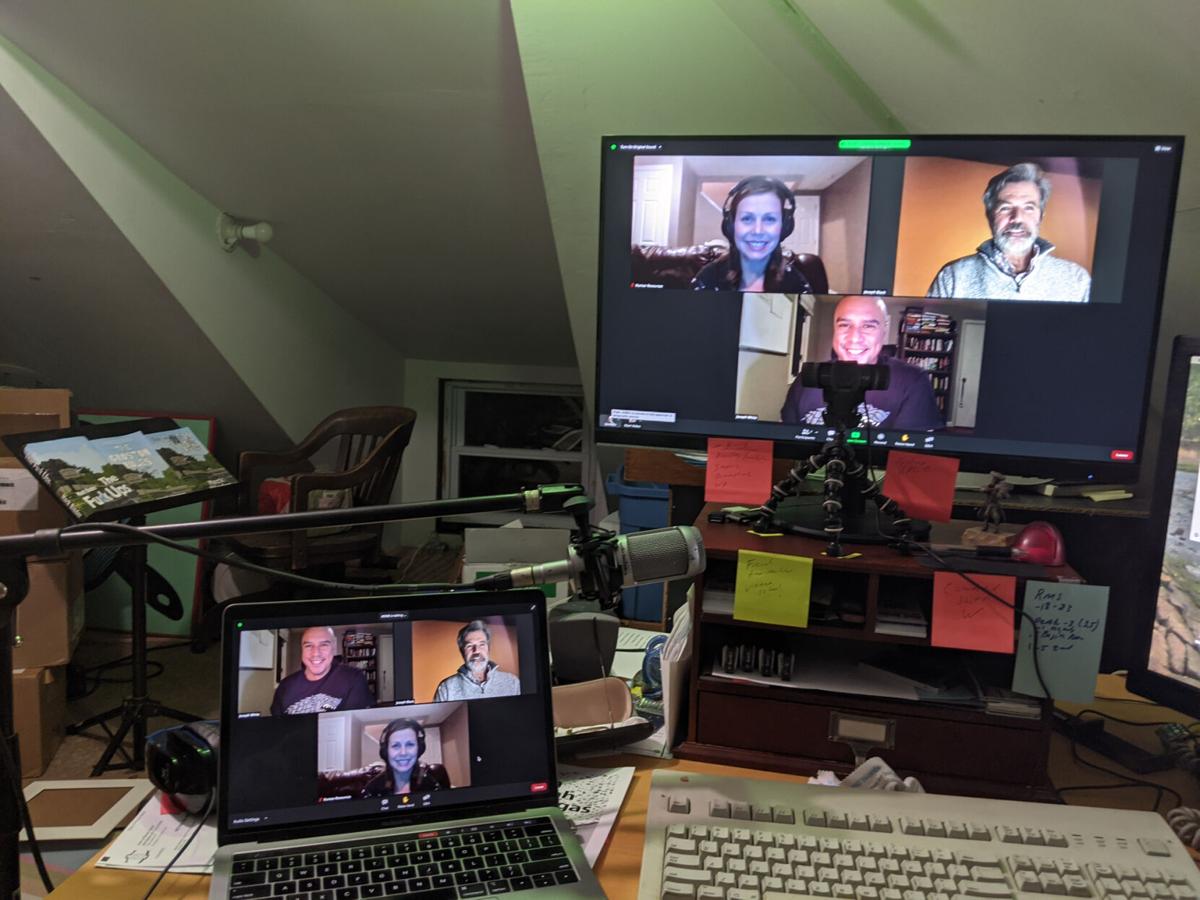 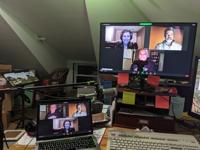 PROVIDENCE, RI (January 12, 2021) – The Wilbury Theatre Group presents the world premiere of The Race by Mark Binder, directed by Brien Lang. This challenging new play, done in an emerging new performance medium, examines the common, and sometimes uncommon, obstacles of a high-pressure corporate interview dance in the Zoom era. Performances will be held on Zoom January 15 – 31, 2021.

Two job-seekers from vastly different backgrounds vie for the same position in a large, faceless corporation. Each reveals uncomfortable truths from their past while dodging landmines from their competition, and dealing with an increasingly demanding disembodied interviewer. The audience also plays an integral part as they can communicate in a live chat, as the interview happens onscreen, and ultimately decide who is the best man for the job.

“As we were all experiencing a shift in performance during the pandemic, I asked myself ‘How do we create a vibrant theater for this moment? After so many online meetings, how do we create something theatrical and visceral?’” says playwright Mark Binder. “The Race is about two people simultaneously interviewing for the same job in the Zoomscape - Joseph Black lives in the suburbs and is on sabbatical while Joe White lives in the city, and has been unemployed for a year. Both characters need the job, but how can they connect with the unseen selection interviewer from Human Resources and the selection committee? The Race not only deals with contemporary issues around bias, politics and work, it makes the audience complicit. That the actors change roles from night to night forces us to question every assumption we make. The experience is intense."

Director, Brien Lang adds, “Mark has crafted it so that each member of our cast can play any one of the three roles and this has been a real pleasure to explore as each one of our actors has brought their own unique flavor to each very different character. We will be shuffling the cast throughout the run so our hope is that audience members will join us on multiple nights for a completely different experience”

The Race had two workshop performances with Wilbury Theater Group in November of 2020. Edge Media said of the workshop performances; “The Race is an uncomfortable, cautionary tale…thematically it touches upon life during the pandemic when in-person interviews are off the table. The Race is not only a cautionary tale [it] hints at a possible future.… It's worth a look, especially when we're all hanging out at home for the most part.”

Performances for The Race are done live and held entirely via Zoom. Patrons will receive a Zoom link to access performances after purchasing tickets prior to the performance. A Zoom account is not required. For tickets and more information, please visit www.thewilburygroup.org/the-race

The Race by Mark Binder

Mark Binder (Playwright) studied playwriting at the Trinity Rep Theater Conservatory and Columbia University's Hammerstein Center for the Arts. He the former artistic director of The Real Fun Theater Company and The American Story Theater. Mark is best known as the politician dared to challenge (and nearly defeat) Gordon Fox, the author of more than two dozen books and audio books for adults, children and families, and as a professional performance storyteller. He has toured the world sharing tales for listeners and readers of all ages. His debut novel, THE GROSTON RULES was released this fall. THE RACE is his first produced play in more than 20 years.

Brien Lang (Director) is an actor, director, playwright, and musician and has been Resident Artist with The Wilbury Group since 2016. Brien's directing credits include The Strange Undoing of Prudencia Hart, Futurity, Mr. Burns: A Post-Electric Play, Passing Strange, A Public Reading of…Walt Disney We Won't Pay, We Won't Pay! Acting with Wilbury –Stupid F@#$ing Bird (Trig), 10,000 Things(Priest) Cabaret (Ernst Ludwig), Threepenny Opera (Tiger Brown), Bloody, Bloody Andrew Jackson (John Calhoun), The Lieutenant of Inishmore (Donny). Also with Wilbury – Sound & Music Design for Ill Seen, Ill Said and Not I, Co-Music Director of This Beautiful City (with Milly Romanzi) and Music Director for DeStefano on the Air and The Teller. He also composed original music for Caucasian Chalk Circle at URI. Other directing projects (select) Medea, Waiting for Godot and Polish Joke – NewGate Theatre, The Gays of Our Lives – Boston and Providence Pride Festivals, The Frogs – adapted and directed for a City of Providence sponsored tour. His original musical Road House: The Return of the Concert of the Musical received its premiere as part of Wilbury New Works and his musical The My Way Murders debuted in the PVD Fringe 2016.

Rodney Eric López (Joseph White / Joseph Black) was born and raised in The Bronx, New York, and is a seasoned and sought-after educator, artist, and non-profit leader. His diverse professional background includes successful tenures in teaching artistry in public schools in New York City and beyond, training, coaching and facilitation, corporate communications and public relations, and executive non-profit leadership. He was prominently featured in the Paramount Classics hit documentary Mad Hot Ballroom and has made numerous appearances on television, including as a dance coach for Paul and Mira Sorvino, 'Dancing with the Moms' on Good Morning America, and MTV’s TRL.

Jim O’Brien (Joseph Black / Joseph White) is a graduate of Trinity Rep Conservatory and an artistic associate at The Gamm Theatre. Previous productions with The Wilbury Group include You Got Older (Dad), How I Learned to Drive (Uncle Peck), Who’s Afraid of Virginia Woolf (George) Other theaters (select): A Human Being Died That Night, Black Bird, and Lonesome West (The Gamm Theatre); Lonely Planet (Counter-Productions Theatre Company); The Glass Menagerie (Gentleman Caller at Portland Stage).

What: The Race By Mark Binder

Where: Performances via Zoom

About The Wilbury Theatre Group

Winner of the 2018 National Theater Company Award from the American Theatre Wing, The Wilbury Theatre Group is a professional, nonprofit theatre company that engages our community in thought-provoking conversation through new works, reimagined classics and adventurous playmaking. We are idealistic, ambitious, and stubborn in our resolve to create theatre that entertains, enlightens, and inspires. For more information visit thewilburygroup.org