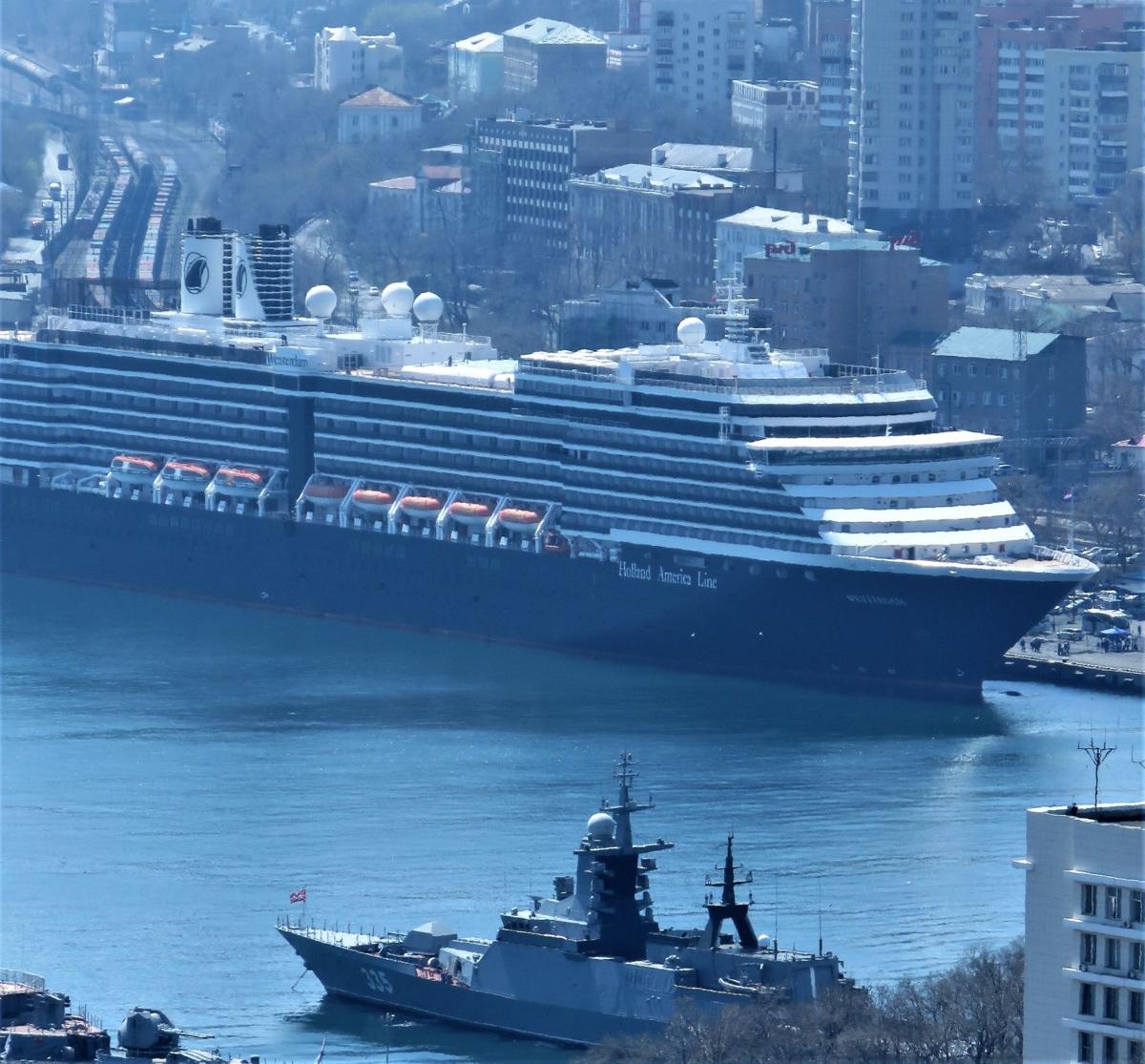 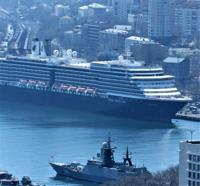 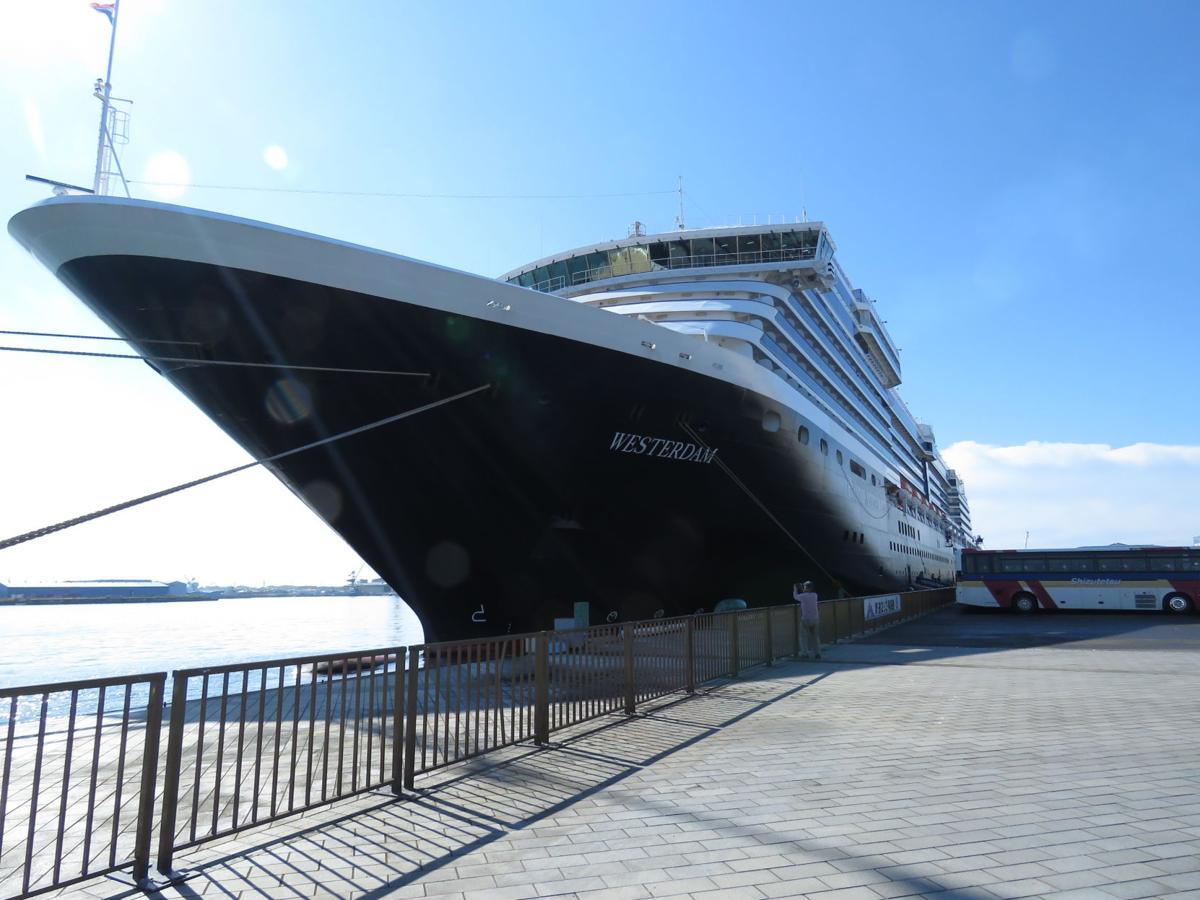 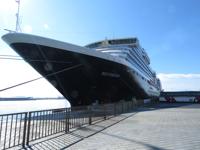 For 14 days in April 2019, we sailed on Holland America Line’s (HAL) Westerdam in a circumnavigation of Japan.

In this series, we will cover the ship, our ports of call, a stop in Vladivostok, Russia and an extra week we spent in Tokyo.

We boarded the Westerdam in Yokohama, the huge port adjacent to Tokyo, and were immediately impressed with the ship’s attractive lines and sensible layout.  The vessel was built in 2004 at the Fincantieri ship-yard in Trieste, Italy, the largest shipbuilder in Europe.  She is 936 feet long overall, carrying a maximum of 1,964 passengers in 984 cabins, with a Gross Registered Tonnage of 81,769.

Instead of the fixed screws and direct diesel engine, the ship has more modern azipods driven by an efficient diesel-electric engine.  The two azipods look like dolphins, hang below the stern and each has large four-bladed “puller” propellers. Each azipod rotates 360 degrees.  When combined with the three bow thrusters, the Westerdam hardly ever needs the assistance of tugs to maneuver in close quarters.

Our cabin, number 4039, was about 10-by-14 feet, with a 6-by-10 balcony, comfortable king bed with lots of storage underneath, large screen TV and strong shower. The décor was quite attractive, with white patterned walls and tan wood trim.

We had carefully chosen a balcony room on the starboard side, somewhat forward of amidships, and not too high up.

On our clockwise circumnavigation of Japan, we were given the best view of the coast during the whole voyage, while minimizing any engine noise from the stern and any rolling in heavy seas.  In the event, the ship’s stabilizers were so effective that the one day we had 50-knot winds and 20-foot seas. We hardly felt any rolling on any of the ship’s eleven decks.

The cost of our cabin was $5,198, exclusive of tours, drinks and economy airfare ($4,019 roundtrip from Dulles International Airport for two). We secured this reasonable fare by booking seven months in advance. We found our cabin and overall staff to be good but not outstanding.  Perhaps this reflects HAL’s approach of including the standard tip rate in the charged fare.

The public rooms had recently been redone and were attractive and not too glitzy. This is in line with HAL’s overall approach, which is to provide interesting, cultural voyages with no raucous partying.

The public room redo had created one problem, however. Several of the presentation venues were not sealed off from nearby corridors or bars, and hence lots of noise leaked in, making it hard to hear.  I have encountered this same silly trend onshore – what are architects thinking?   We were also disappointed that the ship’s so-called “library” had been reduced to only about 70 books.  We have more books than that at home in our bathrooms!

We ate almost all our meals in the informal Lido buffet restaurant, which gave us a huge choice and time flexibility. We found many dishes we liked immensely, especially all the desserts made from meringue!  The 200-foot-long buffet counters regularly offered Italian food, Asian cuisine, a wide choice of meats and fish, vegetarian options, salads and numerous desserts including ice cream and cookies.

The ship had three “gala formal nights” in the main, formal dining room, and offered breakfast, lunch and dinner there, on a set time or “open seating” basis. It turned out that on the gala nights we were rather tired and decided to just eat at the Lido in our jeans instead, so we never used the formal attire we had brought.

We tried all three of the ship’s specialty restaurants. However, we found that the specialty food-focused more on presentation than taste, and hence, the extra cost of $20-35 per person was not worth it.

The ship offered very good to excellent shows, including a terrific group of female Taiko drummers, the engaging soprano Jacqueline Roche and fascinating presentations by two female chefs at the onboard “America’s Test Kitchen”- a spin-off of the well-regarded TV series.

One unusual benefit of HAL ships is the computer classes they offer.  On sea days and some days in port, we took advantage of this, enjoying hour-long classes in Windows 10, Windows accessibility, Paint 3D, Cortana, Microsoft Edge, OneDrive “the cloud”, photo enhancement, etc.

Our instructor Amanda was amazing, with comprehensive knowledge and perfect delivery.  To take these popular classes, you cannot sign up in advance but must line up at the classroom door ahead of time.

Overall, we were very pleased with the ship and our experience, and would happily sail again on one of Holland America Lines’ 14 ships.

Lew and Susan have sailed on more than 30 cruises on every ocean.