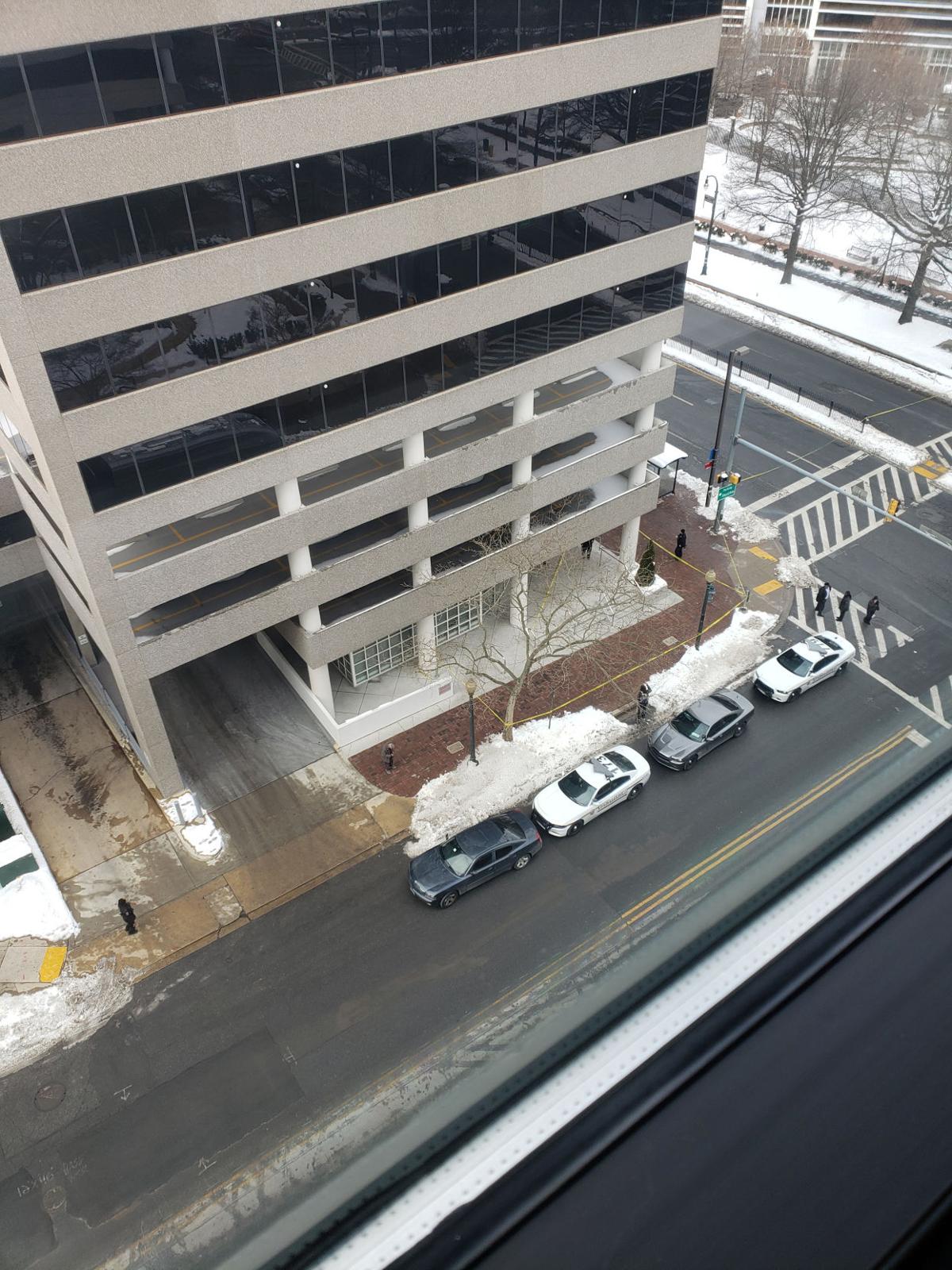 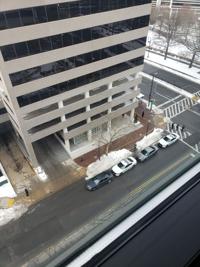 At approximately 10:48 a.m. an Jan. 16 at the BB&T Bank on 1100 block of Wayne Avenue, a man was shot dead by MCP for allegedly attempting to rob the establishment. PHOTO BY CHRISTOPHER SMITH 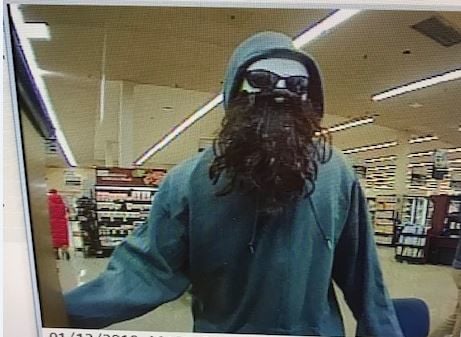 Photo of the masked bank robber at SunTrust Bank in Gaithersburg on Jan. 12. COURTESY PHOTO. 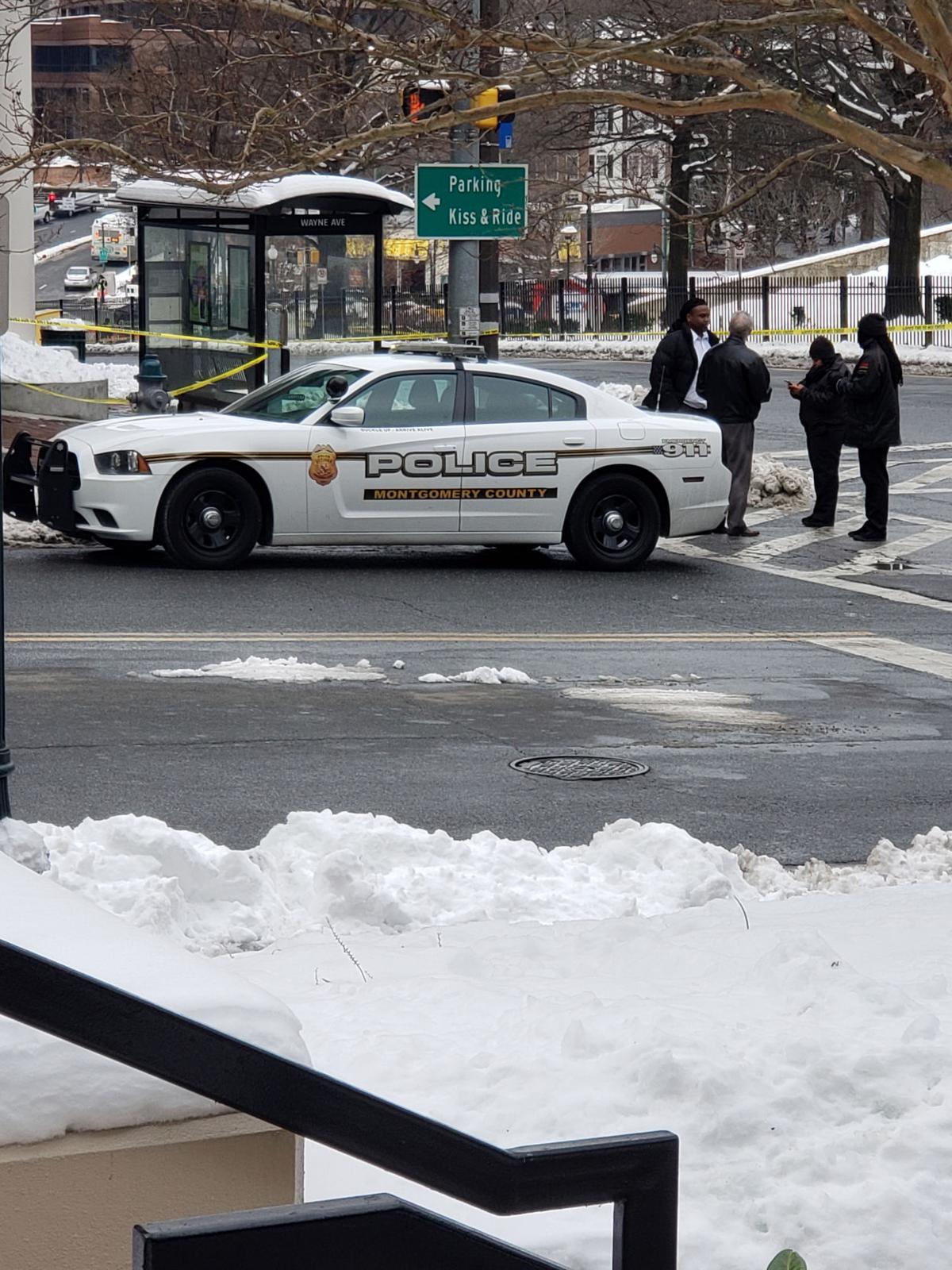 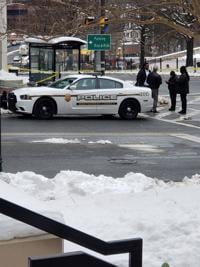 MCP on the scene fir attempted bank robbery at BB&T Bank in Silver Spring on Jan. 16. PHOTO BY CHRISTOPHER SMITH.

SILVER SPRING – Montgomery County was the scene of two bank robberies during the span of five days, with the latter incident resulting in an armed robber being shot dead by a police officer in downtown Silver Spring.

At approximately 10:48 a.m. on Jan. 16 at the BB&T Bank on 1100 block of Wayne Avenue located across the street from the Discovery building, a suspect walked into the manager’s office, demanding $20,000 in cash and said he had a bomb inside his backpack, Montgomery County Police (MCP) Assistant Chief Marcus Jones said.

After making his demand and showing a handgun, the bank manager headed towards the teller line as the panic button was pressed, alerting authorities of the situation. Police confirmed a 9-1-1 call was also made at the time of the attempted robbery.

As sirens sounds got closer to the building, the suspect fled out of the bank without the money and ran towards an alley that lead to Ramsey Drive, where he confronted a county police officer. The officer saw the backpack and attempted to confront the suspect before the shooting, Jones said.

“There was a confrontation; the subject was then shot and disabled,” Jones said. “At that moment of time, we were able to secure him and provide him with medical assistance where he was transported to Holy Cross Hospital and have been informed that he has succumbed to his injuries.”

Jones confirmed that the backpack was still in the suspect’s possession at the time of the confrontation.

The county fire and rescue team closed off the section of Ramsey Drive where the backpack was located to secure the potential bomb. Sections of Colesville Road between Georgia Avenue and East-West Highway were also closed off. U.S. Park Police and the Bureau of Alcohol, Tobacco, Firearms and Explosives arrived on the scene to assist the investigation.

“We had the building evacuated,” Jones said. “We have had subsequent buildings around the area evaluated until we can make this area safe.”

Officials said they could not provide more details from the confrontation or the suspect’s identity at this time as their investigation gets underway.

The attempted robbery comes as county police continue investigating another incident at a SunTrust Bank located inside a Gaithersburg Safeway grocery story in the Quince Orchard Marketplace on Jan. 12.

The robbery occurred between 10:30 a.m. and noon as the suspect handed the bank teller a note, demanding money. The suspect was photographed wearing dark pants and an oversized green, hooded sweatshirt, a fake long black beard with a white mask and sunglasses.

Once the money was received, the suspect left the bank, last seen fleeing on foot towards Nursery Lane and Orchard Grove Road behind the shopping center. Officials cannot confirm if both incidents are related or performed by the same individual.

County police did not say if the two robberies were connected or had the same suspect. Safeway officials said they could not provide comment during an open police investigation.

While he did not work during the day of the robbery, in speaking with his staff, SunTrust Branch Manager Shahid Alam said that the incident still shell-shocks them but he is glad that nobody was hurt.

“We did not know if he had a gun and so, my staff complied,” said Alam.

Alam said that this is first time during his tenure at the bank at an incident like this has occurred.

“This never happens to us, and we never know why people do these kinds of things,” Alam said. “But no clients or tellers were hurt, and clients were not upset at what happened.”

County police said there are no new updates to the Gaithersburg investigation but are urging residents with information pertaining to the case to contact the Major Crimes Division at 240-773-5100. Anonymous types are welcomed by calling Crime Solvers of Montgomery County at 1-866-411-TIPS (8477). Crime Solvers will pay a cash reward with information that leads to an arrest and/or indictment in the incident.