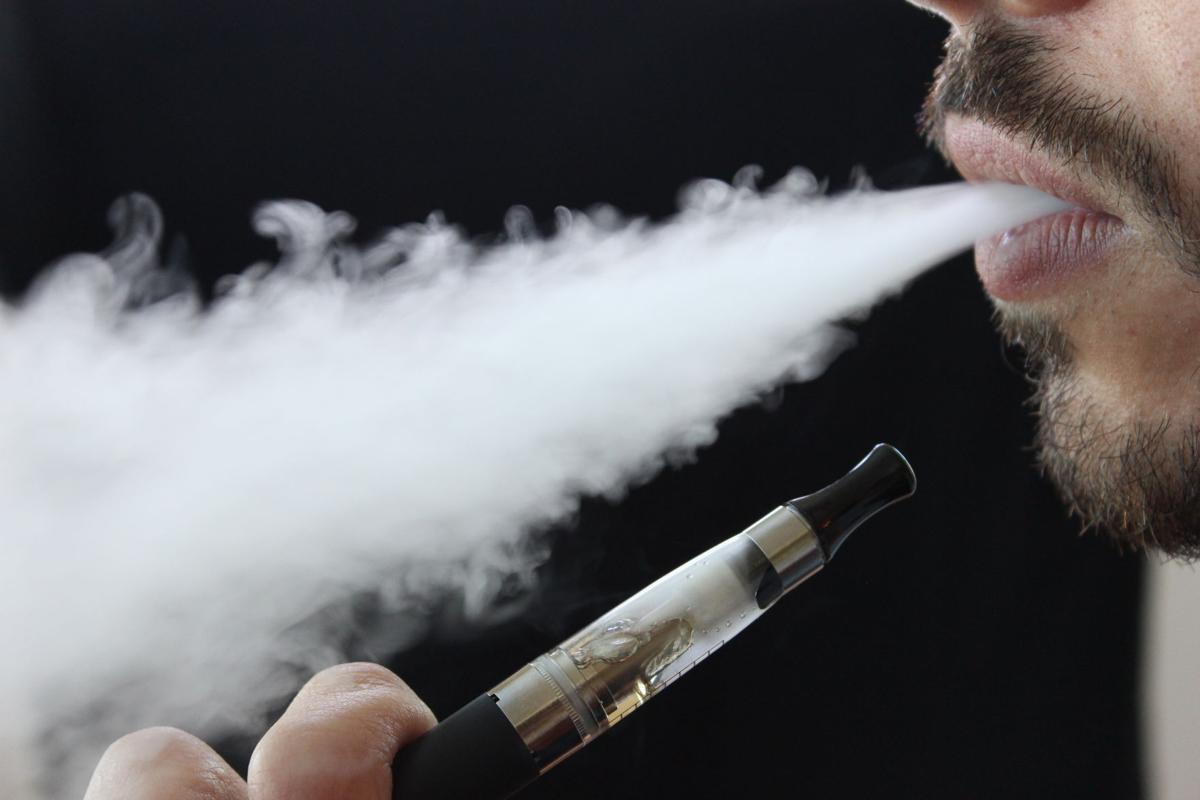 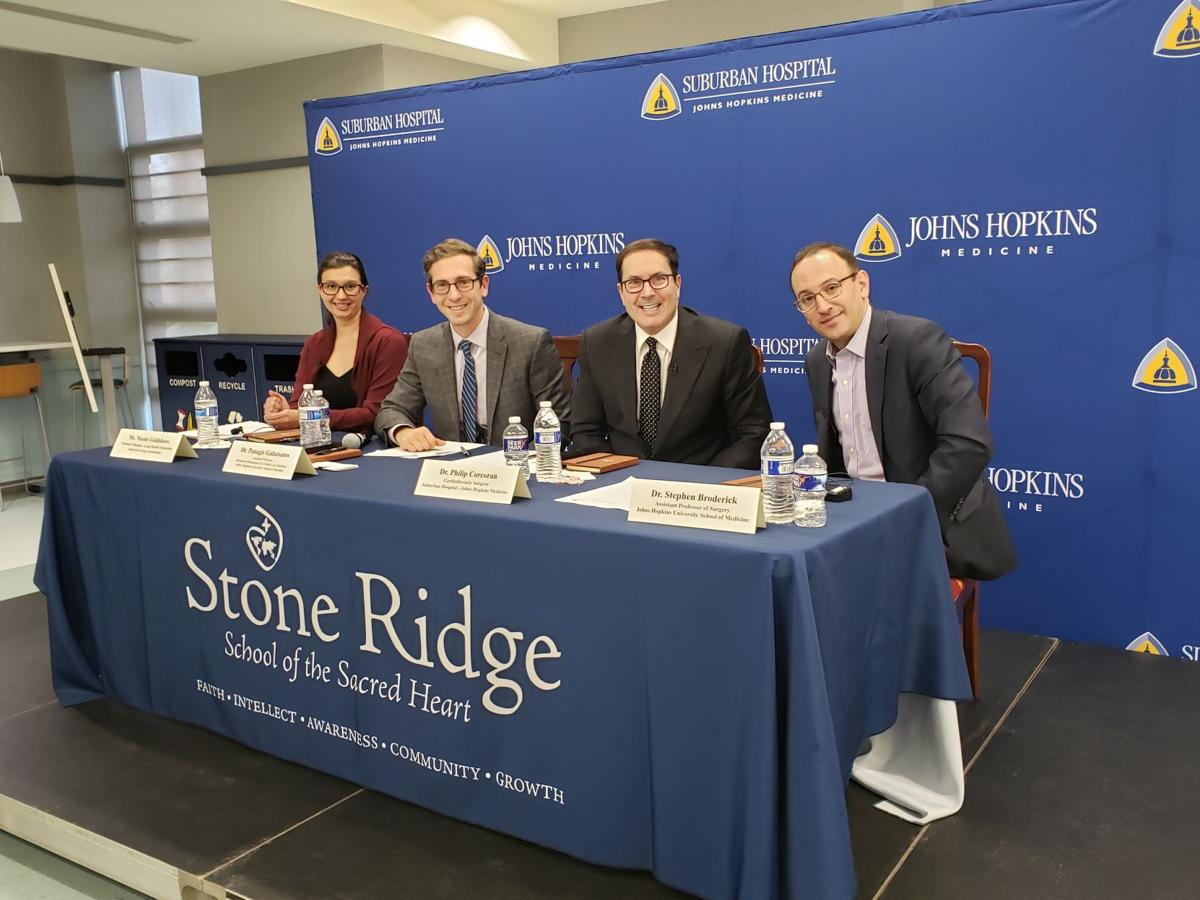 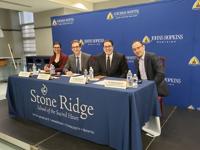 The panel, from left to right, including American Lung Association’s Nicole Goldsboro and Drs. Panagis Galiatsatos, Philip Corcoran and Stephen Broderick spoke to teenagers about the dangers of vaping and smoking. Photo by Suzanne Pollak/The Montgomery Sentinel.

The panel, from left to right, including American Lung Association’s Nicole Goldsboro and Drs. Panagis Galiatsatos, Philip Corcoran and Stephen Broderick spoke to teenagers about the dangers of vaping and smoking. Photo by Suzanne Pollak/The Montgomery Sentinel.

BETHESDA – Electronic cigarettes are relatively new, and the medical community is only beginning to understand how they affect the lungs.

However, a panel of medical professionals told about 100 high school students gathered at Stone Ridge School of the Sacred Heart in Bethesda on Nov. 19 that it took decades for doctors to know that tobacco smoking causes cancer and even death.

“My message for you really is we don’t know how bad this is for you,” said Dr. Stephen Broderick, assistant professor of surgery at Johns Hopkins University School of Medicine.

Dr. Philip Corcoran, surgeon at the cardiothoracic and vascular clinic at Johns Hopkins Medicine at Suburban Hospital, said as of Nov. 13, the Centers for Disease Control and Prevention (CDC) reported 42 deaths and 2,174 cases of electric vaping acute lung injury nationwide.

“This is a new product. We don’t know much about it,” said Panagis Galiatsatos, assistant professor in the division of pulmonary and critical care medicine at Johns Hopkins University School of Medicine. It’s only been in use in the United States for about a dozen years, he said, adding, “We need to get the facts fast.”

E-cigarettes, also known as vapes, hookah pens and JUULS, are battery-powered devices that heat an electronic liquid called e-juice that often contains nicotine. Inhaling an aerosol cloud of nicotine and other substances that are “not proven to be a safer alternative to cigarettes,” according to information distributed to students in attendance from the American Lung Association.

Medical problems can occur quickly, including coughing and wheezing. Vaping also causes the growth of blisters on the top of the lungs that need surgery for removal.

Corcoran told the students of a patient, a regular e-cigarette user, who was healthy and athletic and suffered from a collapsed lung.

“The lung had literally lost its blood supply,” Corcoran said.

Because e-cigarettes are not all the same and often contain different ingredients, “We don’t even know what we don’t know yet,” Broderick said. Vaping may damage other body parts besides the lungs, he said.

JUUL, which makes e-cigarettes, is “trying to get you addicted to nicotine so you will be addicted for life,” Broderick said.

Its advertisements make it appear cool to vape, much like the Marlboro Man commercials of the 1950s did for smoking cigarettes, Broderick said.

“They are not trying to tell you this guy is trying to stop smoking,” he said. “The ads are saying it’s cool.”

But young people are particularly vulnerable as their brains are still growing and addiction to nicotine can rewire their brains permanently, he said.

Should that happen, “They have you for life.”

All the nicotine and chemicals inhaled while vaping are harmful to your lungs, Corcoran said. “It is clear this is not a safe undertaking.”

When some students wondered if vaping could cause cancer or death, Corcoran replied, “There is no question that it can.” The loss of blood supply to your lungs from vaping can be permanent, even if you stop using, he said.

“It can cause very lethal diseases,” agreed Galiatsatos. “There is nothing safe in e-cigarettes.”

Smoke should not be going into your lungs, said. “Air. That’s the only thing your lungs are made for.”

If already a smoker, there are FDA-approved products designed to help a person stop. Those products are safer than e-cigarettes, according to the panel members.

Also, he noted, when people vape, they tend to inhale and exhale slowly, drawing the chemicals far deeper into their lungs than most cigarette smokers do.

“Lungs are precious, and we don’t have enough lungs” to perform transports for ones damaged by vaping, Broderick said.

One program that is in some schools includes intervention and education during four class sessions rather than suspension for a student caught smoking at school, said Nicole Goldsboro, national manager of lung health education at the American Lung Association.

Hosting the one-hour program was the Suburban Hospital and the Sidney Kimmel Comprehensive Cancer Center in partnership with Stone Ridge School and the American Lung Association.

Students and school representatives from about eight private schools attended the event. Others watched it on Suburban Hospital’s Facebook page.