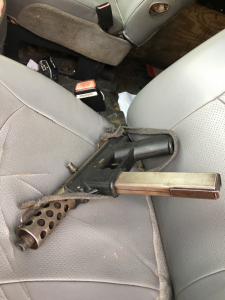 A firearm recovered from the front seat of the suspects’ vehicle.   COURTESY PHOTO

The suspects reportedly obtained an undisclosed amount of currency and escaped driving in a white Chevrolet van. After being spotted in Takoma Park, plainclothes police officers followed the suspects onto the Inner Loop of I-495, where the van collided with another vehicle near Route. 1.

A sixth suspect, Juan Carlos Gomez, 37, who was allegedly driving the getaway car, was struck and killed by an unmarked police car as he fled on foot following the accident.

The police officer involved in the collision with Gomez is 24-year veteran Sgt. William Thomas. Thomas has been placed on paid administrative leave, as a matter of MCP protocol.

All five men are being held without bond at the Montgomery County Correctional Facility.

ICE detainers have been filed against Ayala-Rivera, Avila-Castro, Romero-Rivera and Ramirez-Delgado, according to Montgomery County Department of Correction and Rehabilitation Director Robert Green.

Zelaya-Ramirez has been charged as an adult. He withdrew from Rockville High School before the start of the current school year, according to Montgomery County Public Schools spokesman Derek Turner. Turner said MCPS is not required to track student immigration status, and any other student information related to enrollment is exempt from public information act requests.

The suspects may also be connected to two other armed robberies that occurred in September near the Stoneymill Square Shopping Center, Montgomery County Police said.

Three of the suspects in the Sept. 22 robbery matched descriptions of those involved in the earlier robbery, according to an Oct. 10 Montgomery County Police press release.

Ayala-Rivera was charged with an additional count of armed robbery in connection to the Sept. 22 Exxon Gas Station incident.

The Nov. 4 police press report stated “none of the defendants could provide a confirmed address.”

According to Maryland Judiciary Case records, Ayala-Rivera, Avila-Castro and Zelaya-Ramirez have addresses in Rockville and Romero-Rivera in Silver Spring, while Ramirez-Delgado has no fixed address. The deceased suspect Gomez could not be identified in case records.