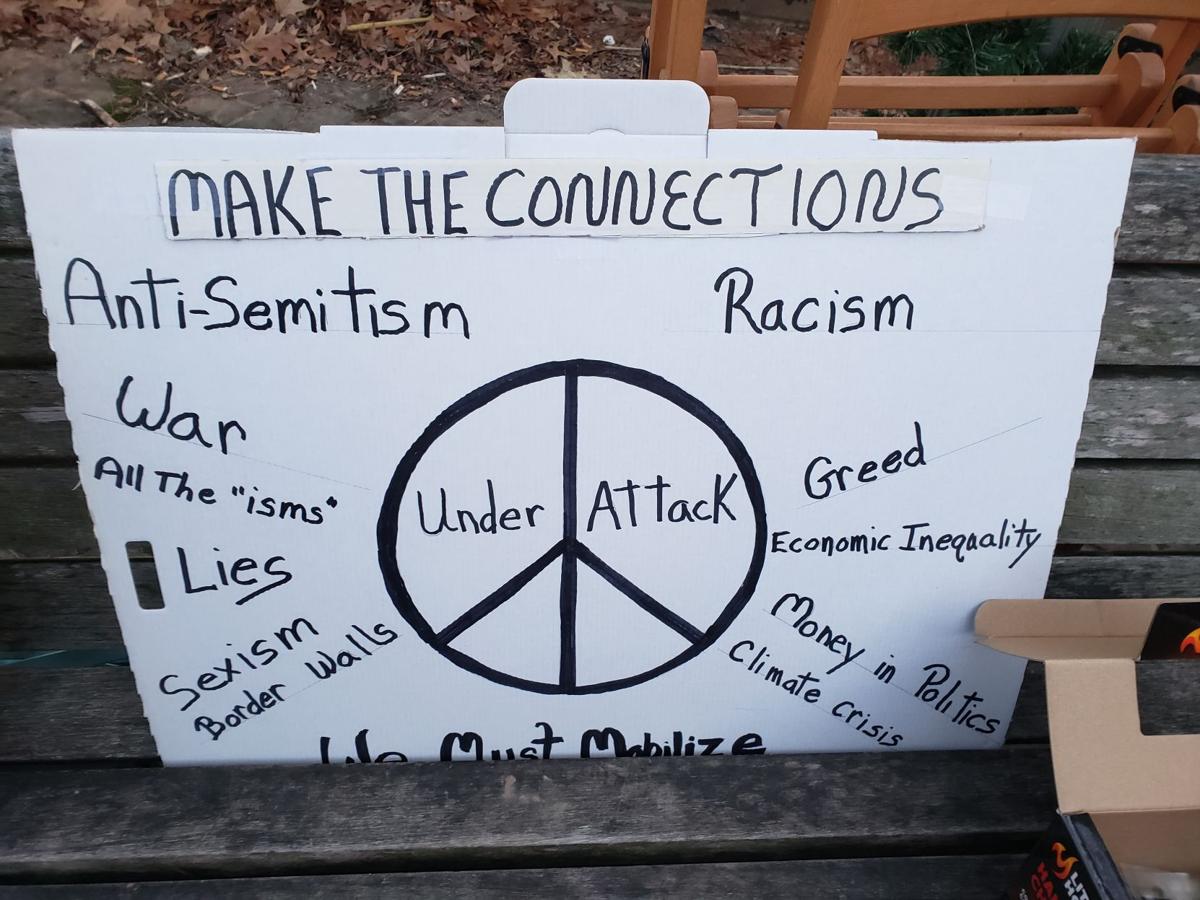 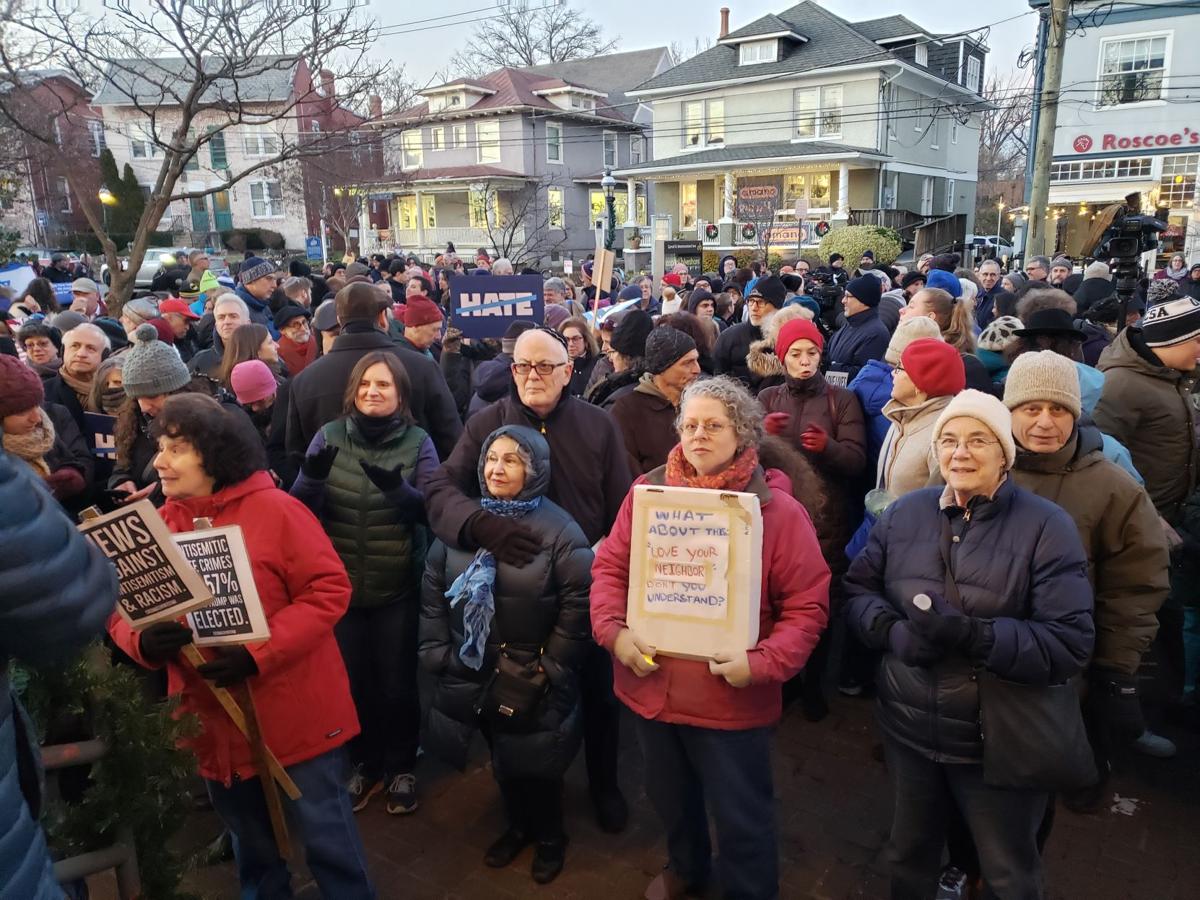 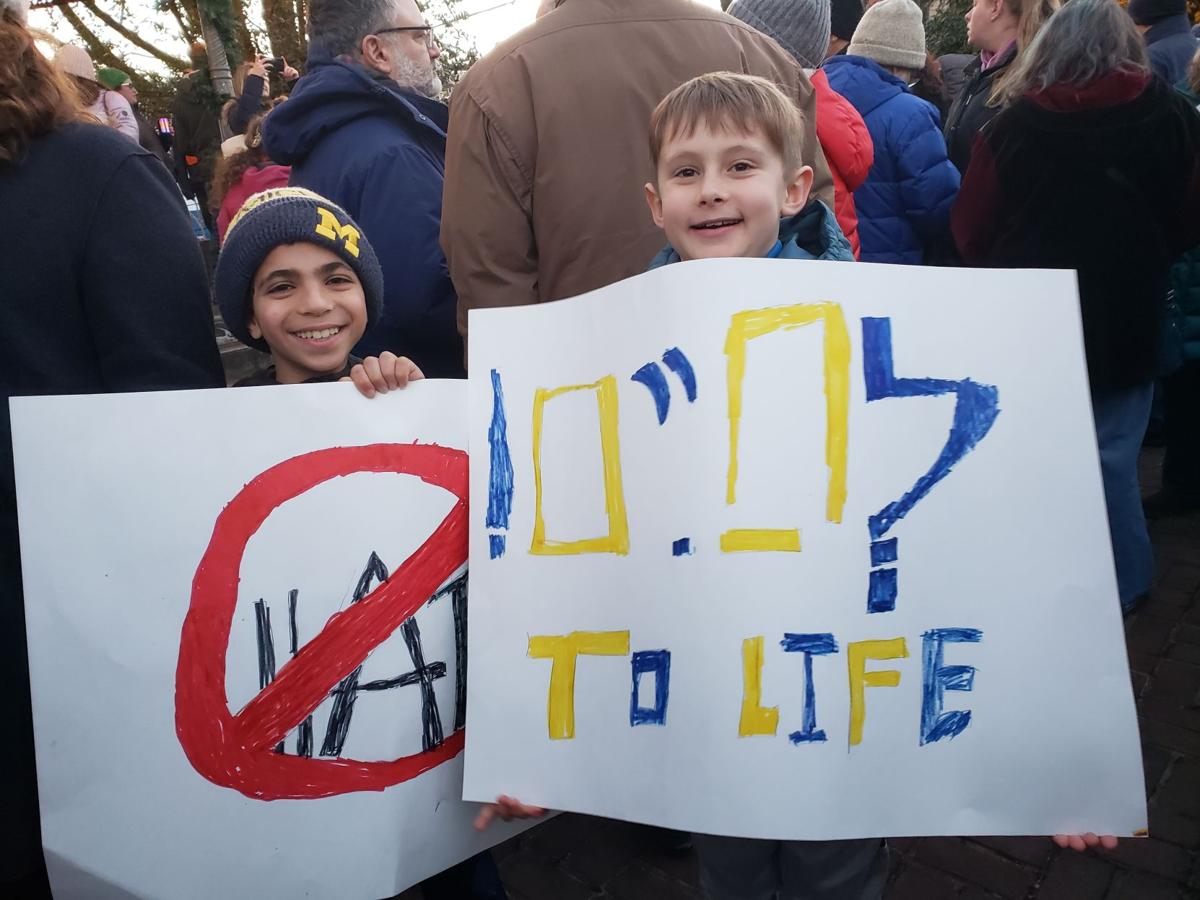 Eli Shoval, 10 (left), and Joseph Brownlie, 9, both of Washington, D.C., made signs and participated in the Dec. 5 vigil against anti-Semitism. Photo by Suzanne Pollak/The Montgomery Sentinel

Eli Shoval, 10 (left), and Joseph Brownlie, 9, both of Washington, D.C., made signs and participated in the Dec. 5 vigil against anti-Semitism. Photo by Suzanne Pollak/The Montgomery Sentinel

TAKOMA PARK – Several hundred people of varying religions, races and ages gathered in the cold on Jan. 5 for a community vigil to “Stand up to Anti-Semitism.”

While those gathered by the Takoma Park gazebo and all the way back onto the street had come to support victims of recent attacks against Jewish people in the New York City area and elsewhere, the evident theme of the evening was that an attack on one group of people is an attack against all.

Takoma Park Mayor Kate Stewart, the evening’s moderator, declared, “We are here to connect with each other and support each other.”

Rabbi Rachel Hersh of Adat Shalom Reconstructionist Congregation in Bethesda agreed, adding, “Tonight we say we will not be made to fear.”

“I was taught any kind of racial, religious, ethnic, or social hated must be confronted and dismantled,” she said.

Also addressing the crowd was U.S. Rep. Jamie Raskin (D-8), who declared, “We must stand up. This is our job.”

The congressman noted, “Anti-Semitism is on the rise. Racism is on the march, and authoritarianism has returned to Europe.”

County Executive Marc Elrich spoke of the anti-Semitism he experienced when he was young, but added that until recently had believed that was a thing of the past.

However, he said, in the past few years, the clock has turned back and even got worse. “We are where we were on steroids.”

Councilman Will Jawando directly pointed to President Donald Trump, blaming him for the increase in bigotry.

“Ever since the election of Donald Trump, rhetoric and violence has divided our nation in even greater ways, targeting anybody who is different,” Jawando said.

“We have never had a president who has so knowingly and willingly turned a blind eye and even welcomed the hate and vitriol of those who would seek to divide us.”

“The increase in anti-Semitic violence is a sober reminder that the American experiment still falls short,” he said, adding that discrimination, violence, and hatred “have no place in America.”

Kay Halpern of Sisterhood of Salaam, an organization that brings young Jewish and Muslim women together, noted, “We know we are stronger together. We know an attack on one of us is an attack on all of us.”

Also addressing the crowd was Rabbi Ethan Seidel of Tifereth Israel Congregation of Washington, D.C., who declared, “We vow not to hold our tongues.”

Planning for the vigil took place in less than one week.

On Dec. 30, Takoma Park resident Jessica Kessler said she “innocently” posted on her Facebook page that she was wondering if anything was planned to show support for the Jews in New York City and elsewhere who were being attacked solely because of their religion.

All the responses she received enabled the event to take place and with such support, she said.

Some in the crowd held signs, both homemade and premade ones created by the Anti-Defamation League.

Attendee Ellen Lazar of Silver Spring explained she came because she believed it was “important that we represent ourselves here and loudly.”

On the same day as the Sunday night vigil, three buses from Rockville and Northern Virginia that were sponsored by the Jewish Community Relations Council of Greater Washington traveled to New York City for a similar, but much larger, rally.