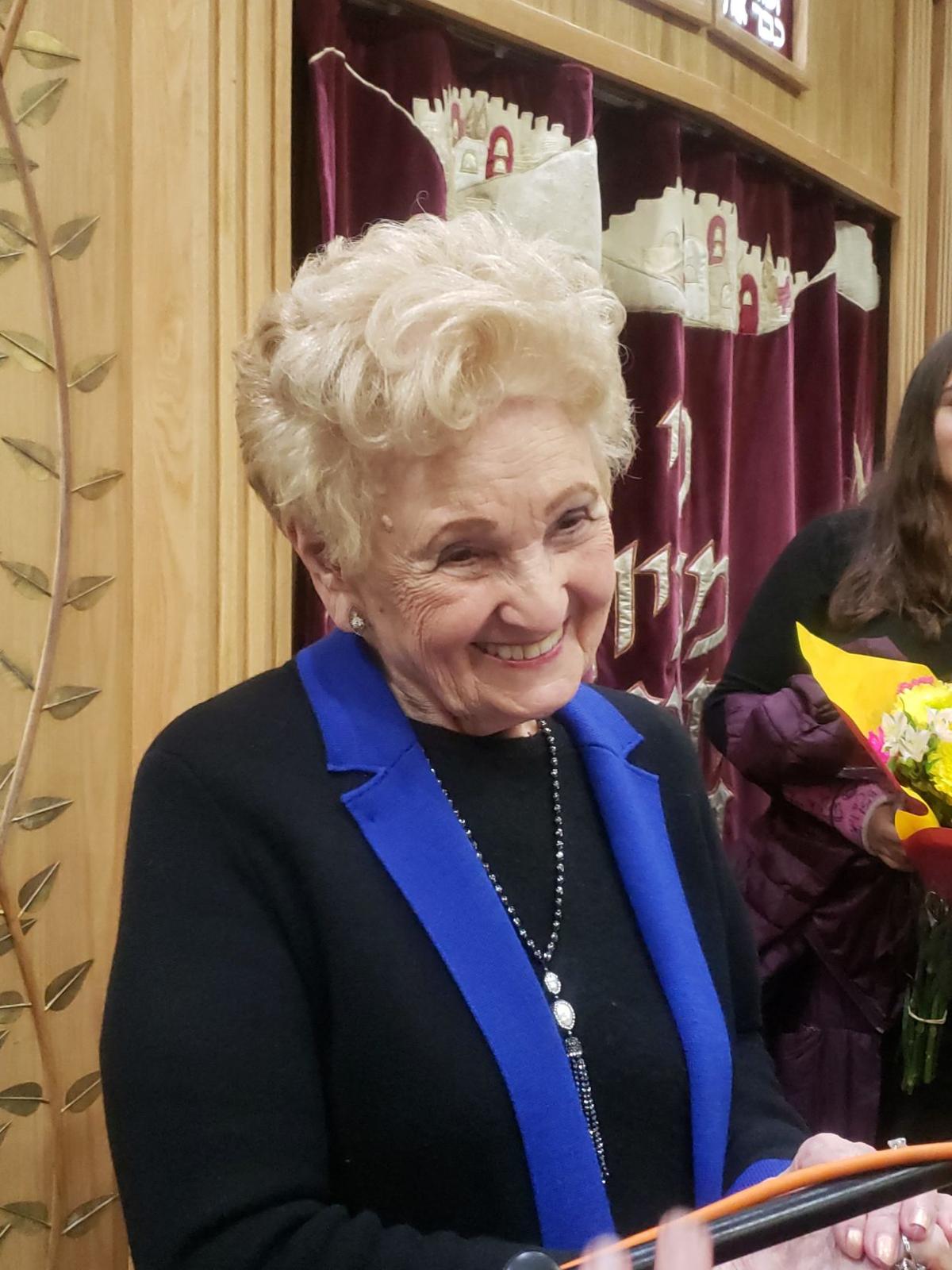 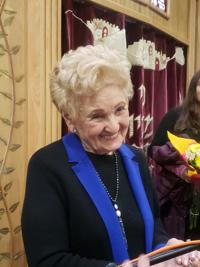 Halina Silber was No.16 on Schindler’s List, which, she told a Silver Spring audience, saved her life during the Holocaust. Photo by Suzanne Pollak/The Montgomery Sentinel. 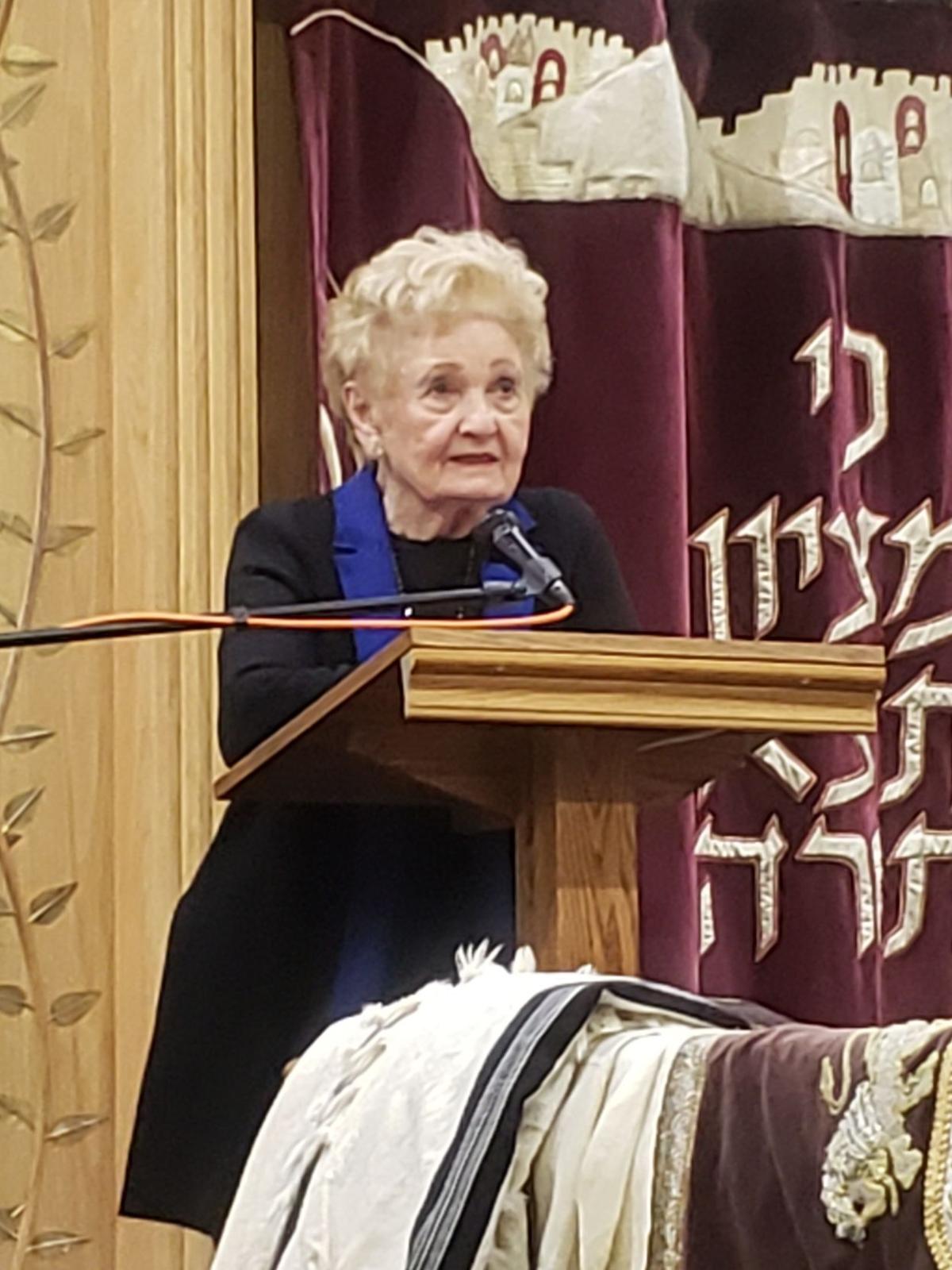 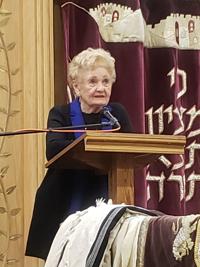 Halina Silber was No. 16 on Schindler’s List, which, she told a Silver Spring audience, saved her life during the Holocaust. Photo by Suzanne Pollak/The Montgomery Sentinel.

Halina Silber was No.16 on Schindler’s List, which, she told a Silver Spring audience, saved her life during the Holocaust. Photo by Suzanne Pollak/The Montgomery Sentinel.

Halina Silber was No. 16 on Schindler’s List, which, she told a Silver Spring audience, saved her life during the Holocaust. Photo by Suzanne Pollak/The Montgomery Sentinel.

SILVER SPRING – Halina Silber credits a German industrialist and member of the Nazi party for saving her life during the Holocaust.

Oskar Schindler saved 1,200 Jews during the Holocaust, and Silber of Baltimore was one of them, she said during a moving speech at Young Israel Shomrai Emunah in the Kemp Mill section of Silver Spring.

She spoke on Nov. 3, the 81st anniversary of Kristallnacht, known as the Night of the Broken Glass, a Nazi-orchestrated pogrom in Germany, Austria and parts of Czechoslovakia in which hundreds of Jewish people were killed and thousands of buildings and synagogues were destroyed.

Kemp Mill Synagogue also sponsored the event in which about 150 people attended, including at least two classes from Melvin Berman Hebrew Academy in Rockville.

Silber, 90, was born in Krakow, Poland. Fear and tragedy occurred early and frequently in Silber’s life. When she was 10 years old, her family moved to a nearby small town rather than enter the Jewish ghetto. As rumors circulated that the Jews in that town were to be rounded up, her mom packed a suitcase, told the young girl to remove her armband with a Star of David on it that all Jews were forced to wear under penalty of death.

Because she was Jewish, her formal education ended after third grade. She was 13 years old when she waved goodbye to her mother. She never saw her again as her parents and two sisters were killed as Silber hitchhiked to Krakow and joined her older sister and brother in a forced labor camp. Soon after, she was taken to Camp Plaszow to work in the laundry.

A few women from the laundry, including Silber, were later picked to work at Schindler’s enamelware factory.

“My job was to carry the heavy pots and pans to the oven to bake in the enamel,” she recalled. “The heat and the weight were unbearable. I didn’t believe I would survive for very long.”

Schindler noticed Silberand changed her job to cleaning offices. His factory was moved to Czechoslovakia, and the workers, including Silber, were sent by train to the new factory. However, they ended up at the Auschwitz concentration camp.

After months of deprivation and despair, Schindler intervened. A German officer received Schindler’s now-famous list of names and those on the list were sent to his new plant, where parts for ammunition were made.

After seeing first-hand the horrible treatment and murder of the Jewish people, Schindler decided “to use his power and risked his own life in order to save our lives,” she explained.

Schindler was not a great hero as much as he was a different kind of person, Silber insisted. He remained a member of the Nazi Party, but “he chose a different mission. Instead of killing, he chose his mission to protect Jews,” Silber noted.

“He was just a decent man who could not tolerate injustice,” Silber said.

Schindler was said to be a heavy drinker and a womanizer, but Silber declared, “One does not have to be a saint to do saintly things.”

Every time the Nazis came to take away a Jewish worker in his factory, he gave them gifts – often the pots and pans the workers were making – to convince them to leave his employees alone.

He also handed out gifts to get his workers more food, Silber recalled.

When the war ended, she headed back to Krakow, hoping to reunite with her family. It took three months, but she finally found one brother. The pair, along with another sister they found later, all ended up in the United States.

When asked about the anti-Semitism taking place around the world today, Silber said it comes “as a great surprise to me, really.”

She continued, “To see it happening, like the beginnings that I remember … but I will tell you, this time I am optimistic. At that time, we had no voice,” she said of European Jews in the 1930s and 1940s.

At the end of her speech, she asked members of the audience, the last generation that will hear firsthand from Holocaust survivors, to continue telling their stories and reminding the world of their past.