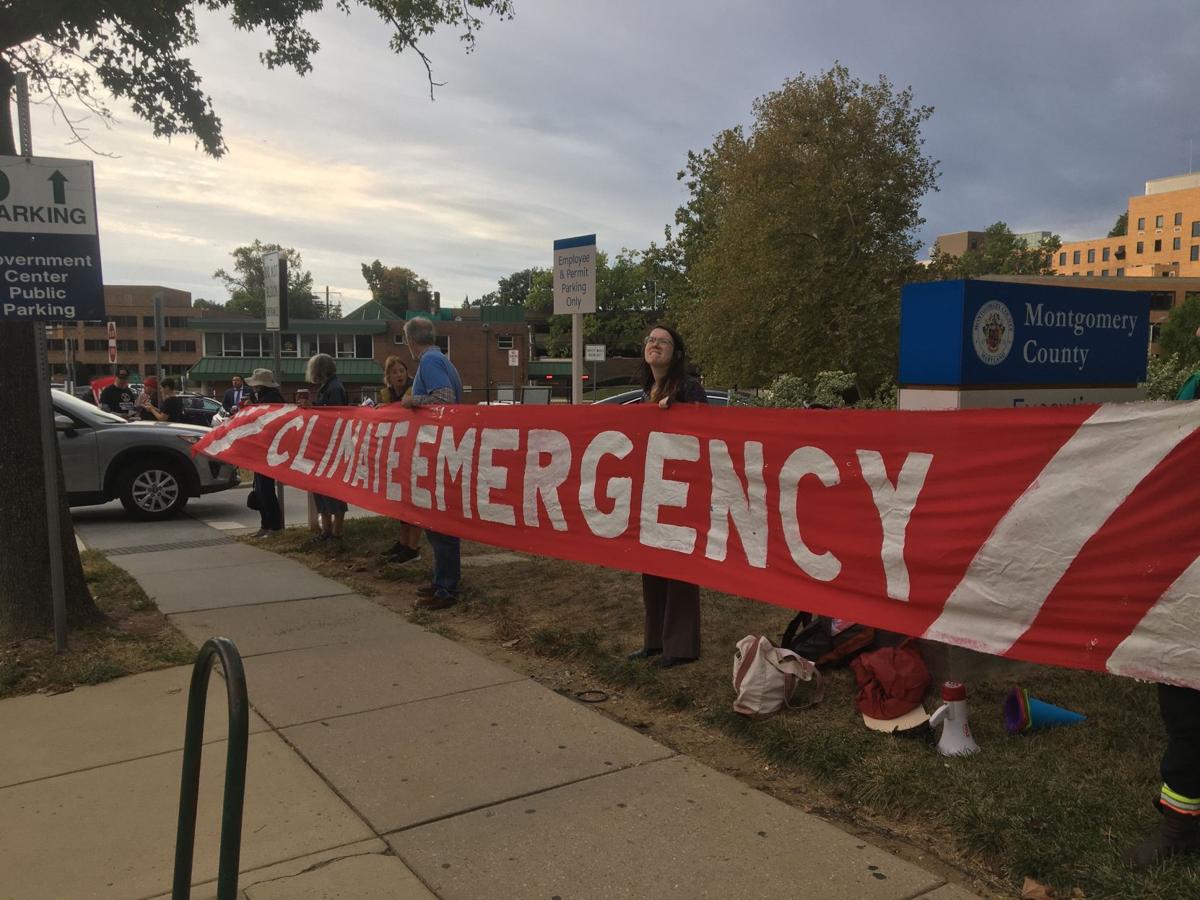 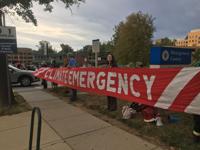 Demonstrators with their banner during a demonstration in front of the Executive Office Building in Rockville. Photo by Elle Meyers/The Montgomery Sentinel. 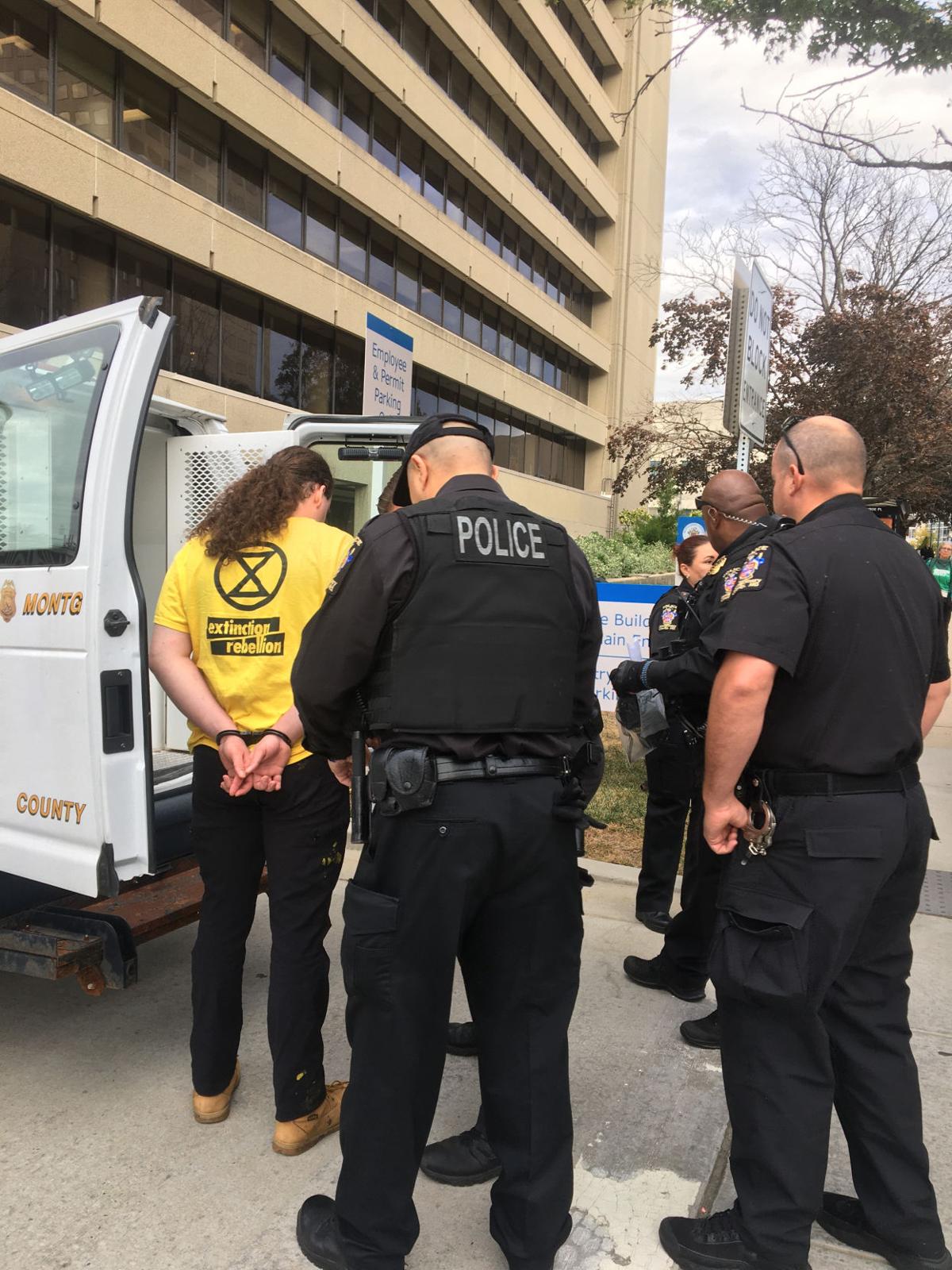 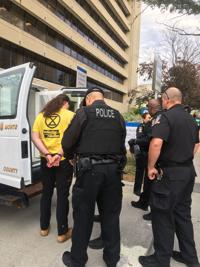 Arrested protestors are placed in Montgomery County Police vehicles to be transported and processed after a demonstration in front of the Executive Office building. Photo by Elle Meyers/The Montgomery Sentinel. 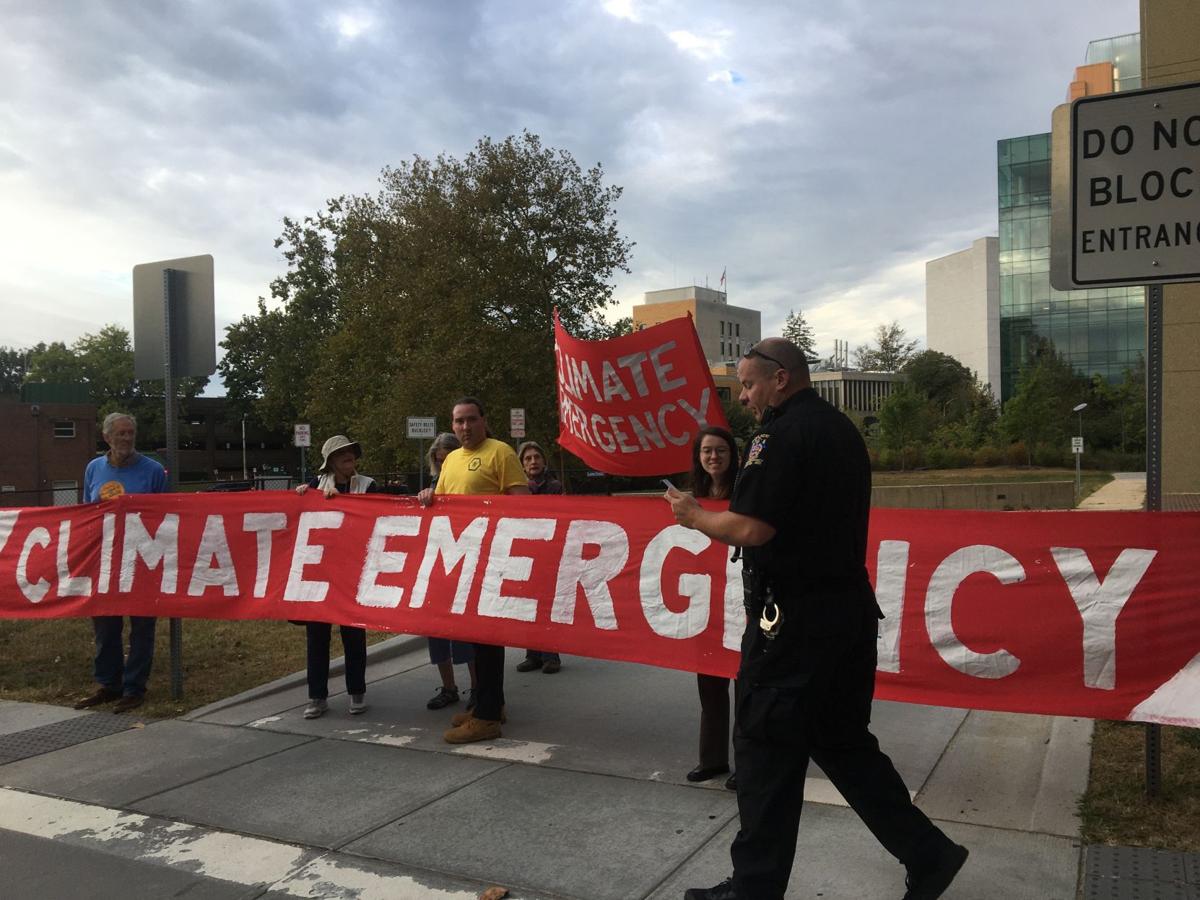 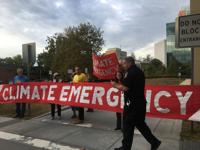 Montgomery County Police officers give protesters their first warning out of three to stop blocking cars trying to park at the Executive Office Building in Rockville. Photo by Elle Meyers/The Montgomery Sentinel.

Demonstrators with their banner during a demonstration in front of the Executive Office Building in Rockville. Photo by Elle Meyers/The Montgomery Sentinel.

Arrested protestors are placed in Montgomery County Police vehicles to be transported and processed after a demonstration in front of the Executive Office building. Photo by Elle Meyers/The Montgomery Sentinel.

Montgomery County Police officers give protesters their first warning out of three to stop blocking cars trying to park at the Executive Office Building in Rockville. Photo by Elle Meyers/The Montgomery Sentinel.

ROCKVILLE — Four protesters were arrested outside of the Montgomery County Executive Office building on Oct. 1 after blocking access to the building’s driveway.

Jim Driscoll is a co-founder of the Extinction Rebellion—MOCO, which is a project within the Montgomery County Chapter of the Climate Mobilization.

He explained that groups like his endorsed Elrich during his campaign to become county executive last year based on campaign promises to focus efforts on creating county goals to reduce carbon emissions.

The Montgomery County Council declared a climate emergency in December of 2017 as a formal resolution and set goals of reducing carbon emissions by 80% by 2027 and 100% by 2035.

However, Driscoll noted that despite these lofty goals, the county had not made concrete steps to reach them.

“The county (declared the climate emergency) and then they have essentially done nothing since,” Driscoll said.

“Meanwhile, the news has gotten worse and worse and worse for the climate. The county could ban natural gas, Berkeley, California just did that, and when Marc (Elrich) was asked about it at the Climate Emergency Town Hall (last month), …he kind of just blew it off.”

Coalition groups focused on environmental issues have not been impressed with the county’s actual actions in combating climate change.

“The coalition recently gave the county a failing score of 32% on implementing those goals. This score included interviews with Marc’s staff and his plans, or lack thereof, for climate,” wrote Driscoll in an Extinction Rebellion—MOCO newsletter.

The demonstration at the county office buildings comes at the same time as larger protests organized by the climate group Extinction Rebellion, take place in areas like London, New York, Paris and Berlin.

Driscoll explained that he expected some of the protesters would be arrested by police and they were fully prepared to be detained.

“To make change it’s always taken people being willing to be arrested, to step outside, to disrupt business as usual,” he said.

Sara Sokoliski participated in the demonstration and was arrested by Montgomery County Police (MCP) officers for holding a red banner and obstructing the driveway.

Sokoliski explained that she is involved with the Extinction Rebellion and got started with the climate organization back in May.

“A lot of our rebels are up in New York City right now, at RebelFest, raising hell, and I couldn’t make it (to New York), so Jim Driscoll asked me to come out (to this demonstration),” she said.

Sokoliski noted that the rapidly changing climate and lack of response from officials give her “unrelenting climate anxiety.”

“I am just absolutely terrified of what my future holds, and I have a niece and a nephew that are three years old and two years old, and it’s just really scary imagining even what their future is going to be like…so, really, it’s just fear is why I’m out here,” she said. “I’m trying to get people to listen to why I’m out here.”

Sokoliski explained that she was prepared to be arrested by the police for demonstrating. She also noted that because of her job, she feels comfortable protesting and risking being arrested.

“I have a pretty lenient job position. I’m an environmental researcher, so my company is…they don’t ask too many questions,” Sokoliski said. “I’ve talked to my department head about some of the stuff I do on a personal level, but I’m really lucky not to fear any retaliation from my employer, so I’m privileged in that sense and feel the need to use that for people who can’t.”

Lt. Robert Ravida of the Montgomery County Police Department said that officers were making an effort to talk the protesters out of disrupting traffic.

For the first hour or so of the demonstration, protesters were off to the side of the driveway on Monroe Street, allowing cars to get by.

About 14 members of the police department’s Special Events Response Team were present at the protest.

Ravida explained that the officers supervising the demonstration were there to keep the protesters safe just as much as they were there to make sure the event stayed peaceful.

“They have a First Amendment right to protest,” Ravida said. “They don’t have a right to block traffic, preventing people from getting to work, but I have no problem with them coming out here. Actually, part of our job is to make sure that they are unimpeded, and they’re allowed to use their First Amendment right, and no one bothers them as long as they’re doing it lawfully and on the sidewalk.”

He explained that in nonviolent protests like Tuesday’s officers are trained to use nonviolent tactics like giving verbal warnings. However, he said, if protesters decide to obstruct traffic, they will be subject to arrest.

Ravida also noted that he offered Driscoll an opportunity to meet with Elrich and discuss their concerns, but Driscoll declined.

Elrich could not be reached for comment after repeated attempts.

At about 9 a.m., three protesters, including Driscoll and Sokoliski, stood in the Executive Office Building’s driveway and prevented cars from passing. Officers gave the demonstrators five minutes between verbal warnings and then arrested and handcuffed the four standing in the driveway.

“This is what it’s going to take to save the planet,” Driscoll said as he was being placed in the police vehicle.