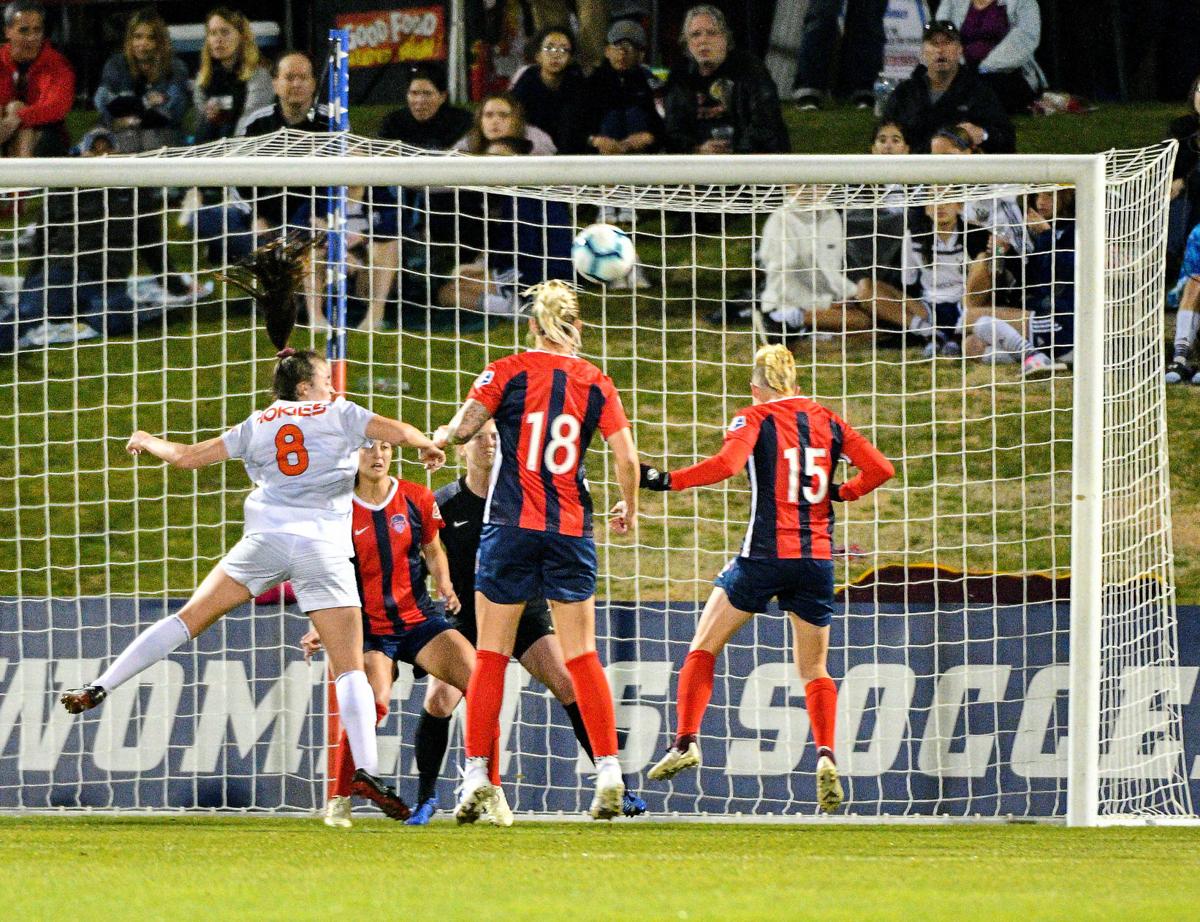 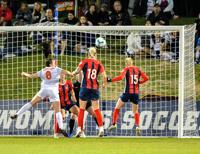 Joanna Lohman heads a Tori Huster corner kick towards the goal. The header glanced off the top bar. 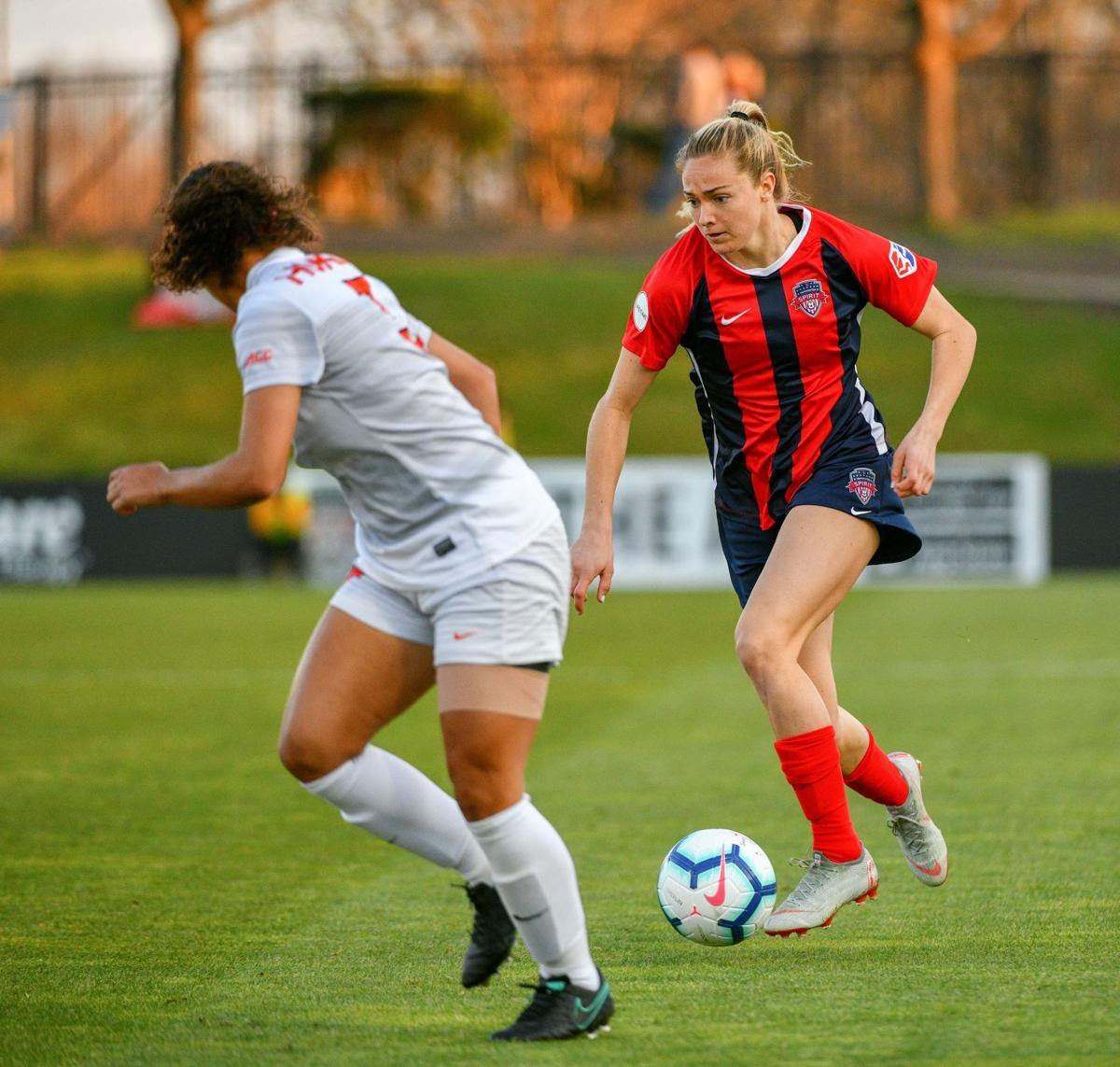 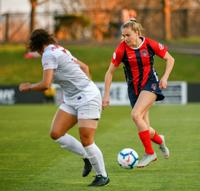 Megan Crosson (5) moves the ball back to the midfield during a preseason soccer match between the Washington Spirit and Virginia Tech. Photo by David Wolfe/The Montgomery Sentinel. 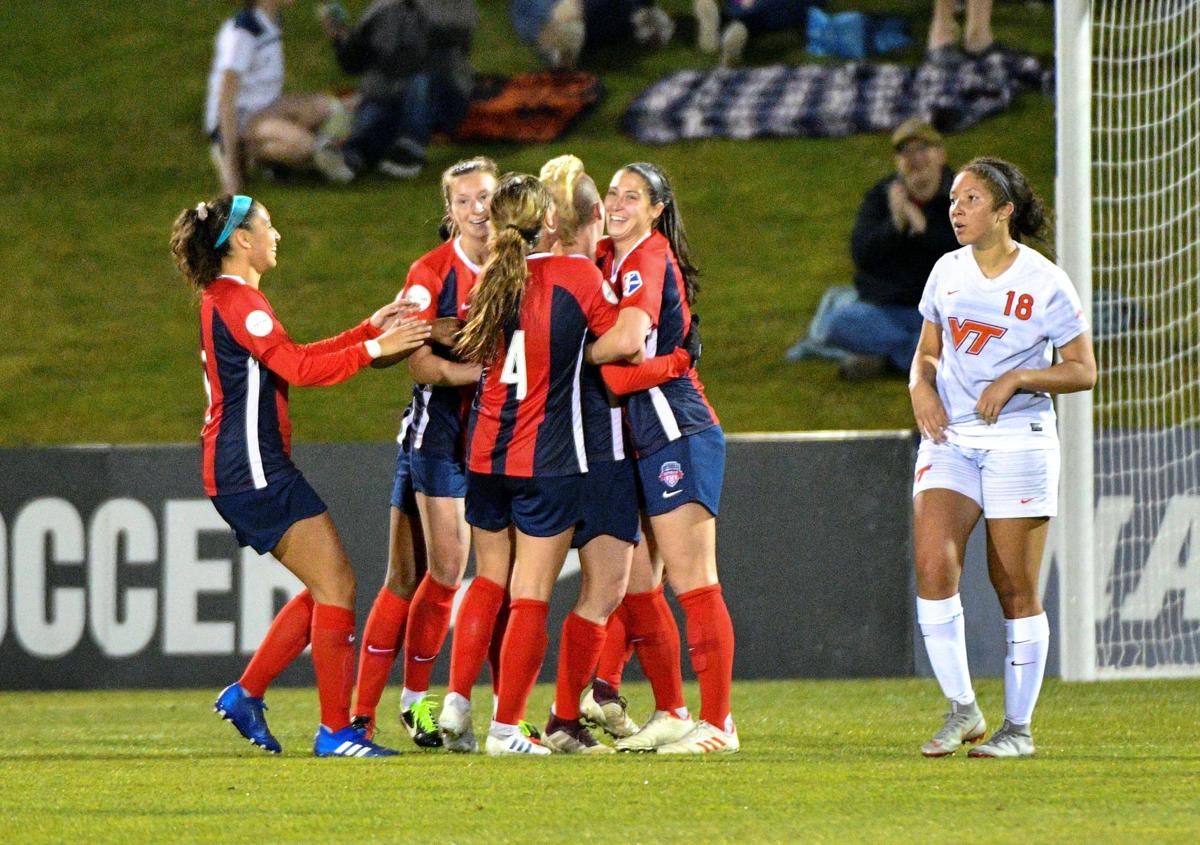 BOYDS – The Washington Spirit ended their pre-season with a last-minute 1-0 win over college side Virginia Tech to end their preseason on a positive note.

[Click here to check out our game photos in our photo gallery!]

On a gorgeous April 6 evening at Maureen Hendricks Field, the Spirit showed its preparedness for a bounce back year in the National Women’s Soccer League. They showed no weakness on the defensive line, holding the Hokies to zero shots on goal during the entire first half of the match, and dominated the attacking side of the field. However, despite their ball possession and Washington’s two shots on goal, both teams entered halftime still scoreless.

“I still think we’re a little bit out of sync from midfield into the front three, which is a bit of a tough one for them,” Head Coach Richie Burke said. “You play good football through the back and through midfield, it’s just that final pass, that final link that is letting us down. The results showed it.”

The physical aggressiveness by both teams was turned up in the second half. The Spirit had an opportunity to take the lead in the 49th minute with high speed shot by Megan Dougherty Howard only to have it deflected by Hokie goalkeeper and U.S. Under-20 player Amanda McGlynn.

The Spirit earned a penalty kick in the 72nd minute off a foul on Arielle Ship.  Striker Joanna Lohman took the penalty kick but McGlynn read her body language and made the save. Lohman said her first inclination was to go to the right but she thought McGlynn was anticipating her to go that direction so she decided go to the left instead.

“They say you should always go with your first instinct.  That is what I will do next time.” Lohman said

Lohman avenged her earlier mistake and found the back of the net seven minutes later after striking a low shot that deflected off McGlynn and rolled into the goal, giving the Spirit a 1-0 lead.

For the last six minutes of the match, the Spirit kept the majority of the ball possession away from Virginia Tech, guarding their one-goal lead and ending their preseason victorious.

With the win, the Spirit showed fans an upgraded offense that attempted 19 shots. Moving into the season, ball movement from the midfield to the frontline will be an area that needed improvement, forward Ashley Hatch said.

The Spirit open the NWSL season at on April 13th at 7:00 PM against Sky Blue FC.