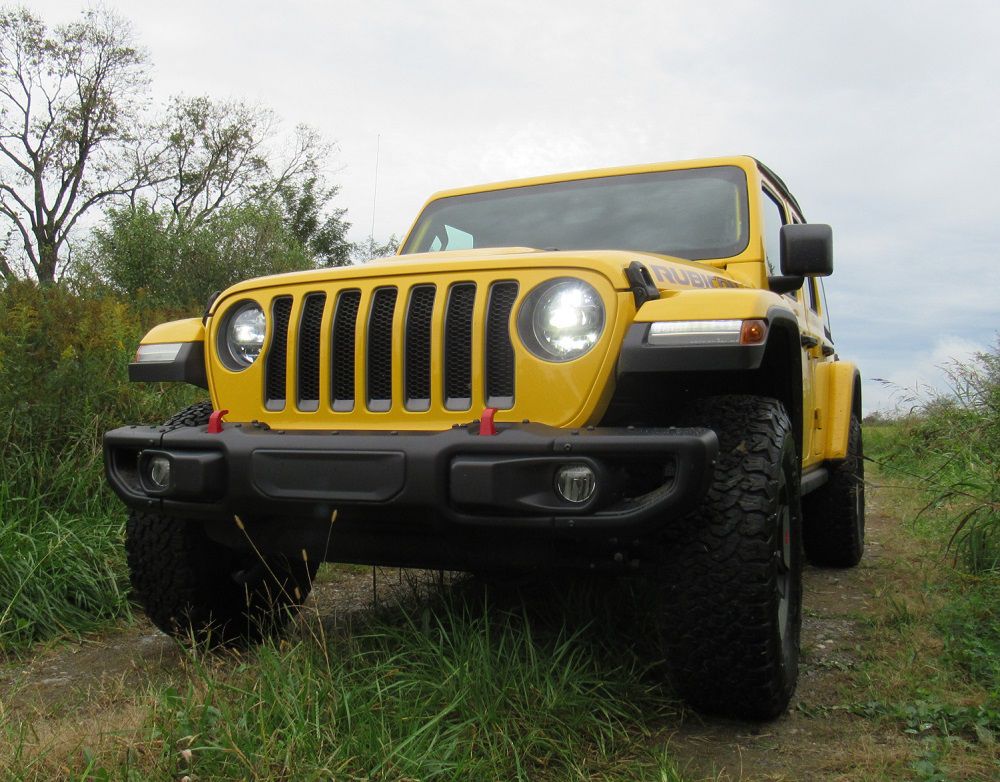 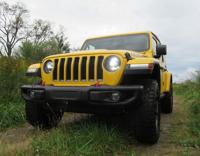 The 2018 Jeep Wrangler wears a familiar face, comes packed with inimitable character and is almost unbeatable off-road — but it’s expensive, starting at $29,440 sparsely equipped and hitting $54,385 as tested. COURTESY PHOTO 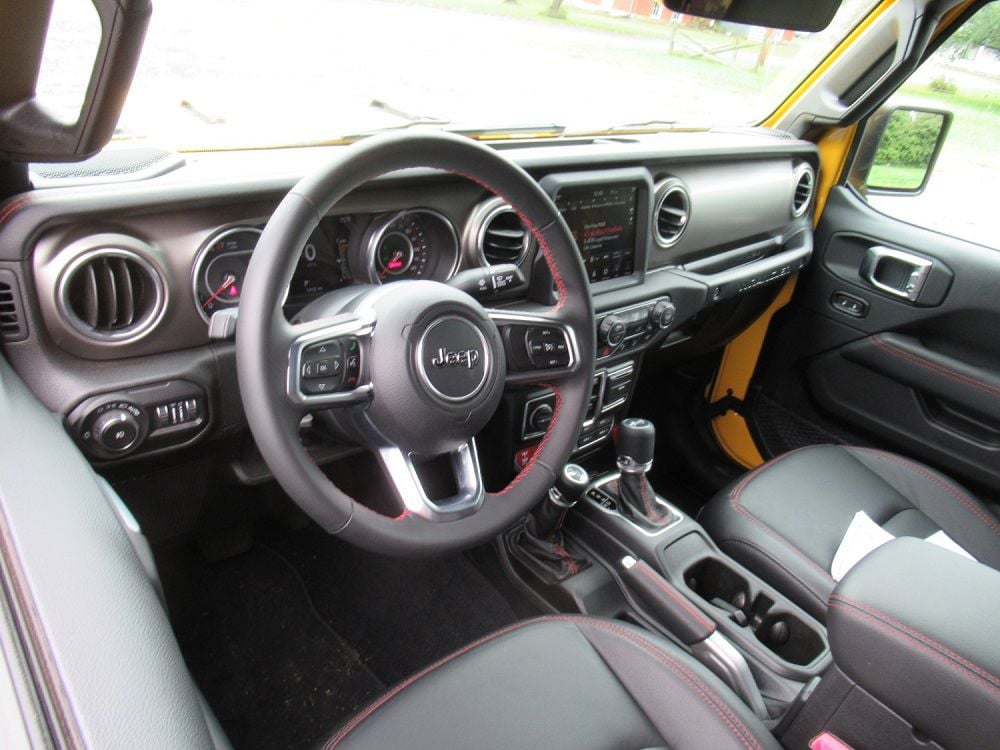 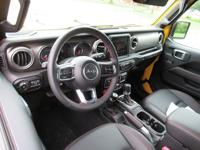 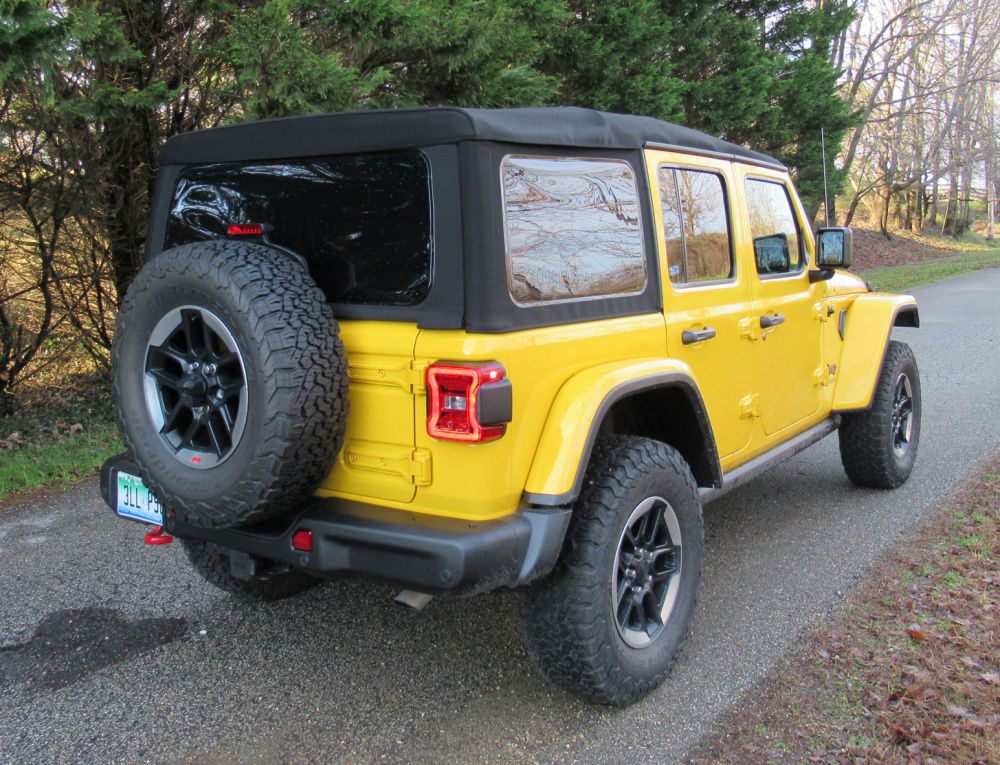 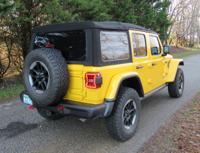 The 2018 Jeep Wrangler’s four-door “Unlimited” model has as much interior space as many conventional midsize SUVs, but it otherwise trails the rest of the market when judged by the conventional standards for everyday comfort, performance, and value. COURTESY PHOTO

The 2018 Jeep Wrangler wears a familiar face, comes packed with inimitable character and is almost unbeatable off-road — but it’s expensive, starting at $29,440 sparsely equipped and hitting $54,385 as tested. COURTESY PHOTO

The 2018 Jeep Wrangler’s four-door “Unlimited” model has as much interior space as many conventional midsize SUVs, but it otherwise trails the rest of the market when judged by the conventional standards for everyday comfort, performance, and value. COURTESY PHOTO

Early on, they were purely utilitarian — a loud, bouncy machine with a seat. But then someone realized that it’s more pleasant to mow the lawn if you have a cold drink within reach.

That’s also the story of the Jeep Wrangler. Tracing its origins back to the iconic World War II military vehicles, the Wrangler remains a tool for tackling the mud and boulders of messy off-road terrain. But over the years, it’s gotten a lot of cup holders, too — four literal ones, but also plenty of other creature comforts that round out the overall package.

For 2018, Jeep fully redesigned the Wrangler, carrying over the familiar shape but upgrading the mechanical components and adding more of the advanced connectivity features found in all types of cars today. A touchscreen infotainment system with a backup camera is now standard equipment, and, on most trims, it syncs with your smartphone via Android Auto or Apple CarPlay. There are four USB ports. Jeep even boasts about the new Wrangler’s “numerous phone storage areas” throughout the cabin.

Jeep has also taken steps to improve the Wrangler’s on-road ride and handling. However, underneath all of the cup holders and USB ports, it might as well be a riding mower: a tool, a machine, a piece of equipment — not an ordinary car.

That’s not to say you can’t use the Wrangler as a car. Countless people do. Ever since Jeep launched the first four-door Wrangler Unlimited more than a decade ago, it’s been one of the best-selling SUVs in the country.

But for better or for worse, the experience isn’t much like any other car you can buy today.

While most of today’s SUVs have been carefully refined and polished, and some even handle like sports cars, the Wrangler still drives like an old-school truck. A winding road makes you want to slow down and tighten your grip on the steering wheel. If your coffee cup is overfilled, the Wrangler’s bouncy ride quality will slosh it. Brick-like aerodynamics generate plenty of wind noise on the highway.

There’s a perfectly good reason that the Wrangler feels like this. This isn’t a case of a vehicle that was designed poorly, but one that’s designed to do far more than putter along paved roads.

The Wrangler’s off-road capability is legendary, and rightly so. It can plow over or through obstacles that would stop pretty much any other motor vehicle more civilized than an ATV or a tank. The tested extra-capable Rubicon model comes from the factory with off-roading equipment that Jeep enthusiasts used to buy from aftermarket suppliers.

It’s not just the capability that makes the Wrangler stand out. It’s one of the few convertibles left on the market, and the only SUV that lets you remove either its soft top or hard top. For further intimacy with the outside world, you can even remove the Wrangler’s doors and fold down its windshield.

All of the Wrangler’s capability and unique features make it pretty expensive. For a base two-door model with a manual transmission, crank windows, and no air conditioning, prices start at $29,440. You pay $3,000 more for a four-door Unlimited with the same equipment. The tested truck approached $55,000, with plenty of luxury features but also some notable omissions, such as power-adjustable seats.

Unlike a little toy sports car, the Wrangler’s performance doesn’t prevent you from using it as a family hauler. Even the two-door model has a decent back seat and acceptable cargo room, and the four-door Unlimited has the roominess and interior space of a midsize crossover like the Ford Edge or Subaru Outback.

Fuel economy has also improved. The Unlimited returns a decent 20 miles per gallon in mixed driving with the tested V6 engine and 22 mpg with the newly-optional turbocharged four-cylinder engine, while the two-door model does 2 mpg better.

The 2018 redesign also rewards the Jeep faithful with more and more creature comforts, including a better-finished dashboard, more electronic-connectivity features and new safety features. To continue our earlier analogy, that’s a lot of cup holders.

The underlying question, though, is whether you want to pay luxury-car money to drive a riding mower, cup holders or not. By conventional automotive metrics — ride and handling, interior ambiance, luxury amenities, and so on — the Wrangler falls flat as a $55,000 car, or a $30,000 one, or even a $20,000 one.

And to be clear, it’s not the only vehicle with hardy off-road ability. Most pickup trucks are highly capable, as are such semi-affordable SUVs as the Toyota 4Runner, the Land Rover Discovery Sport, and even the rest of Jeep’s lineup (which will soon include the Gladiator, a newly-unveiled pickup version of the Wrangler).

But the Wrangler’s character is a big part of its appeal, even for buyers who never use a fraction of its go-anywhere capabilities. A 4Runner can tackle mud and even boulders, but it’s comparatively quiet and unassuming on the road. You can’t take off the doors, and it doesn’t have 75 years of heritage behind its appearance.

If you value those qualities enough, the question isn’t whether to get a Wrangler or a Land Rover. It’s what color you want for your Wrangler.