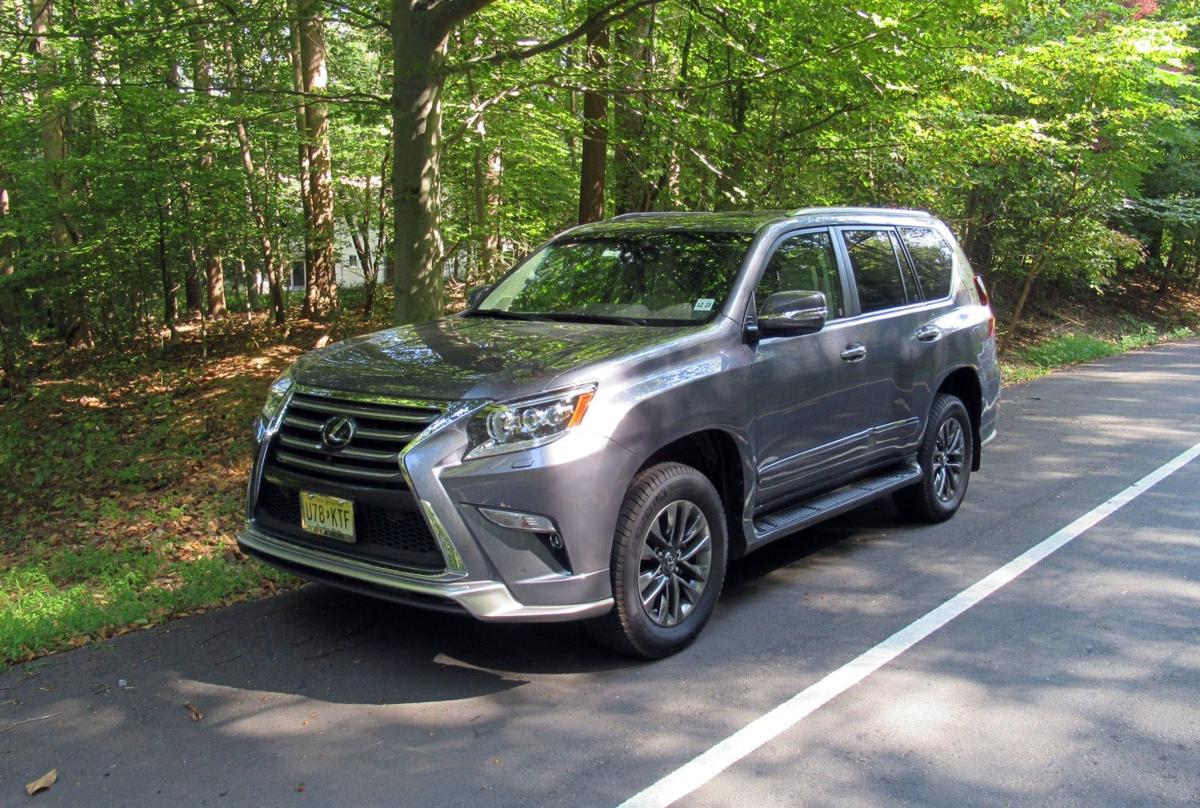 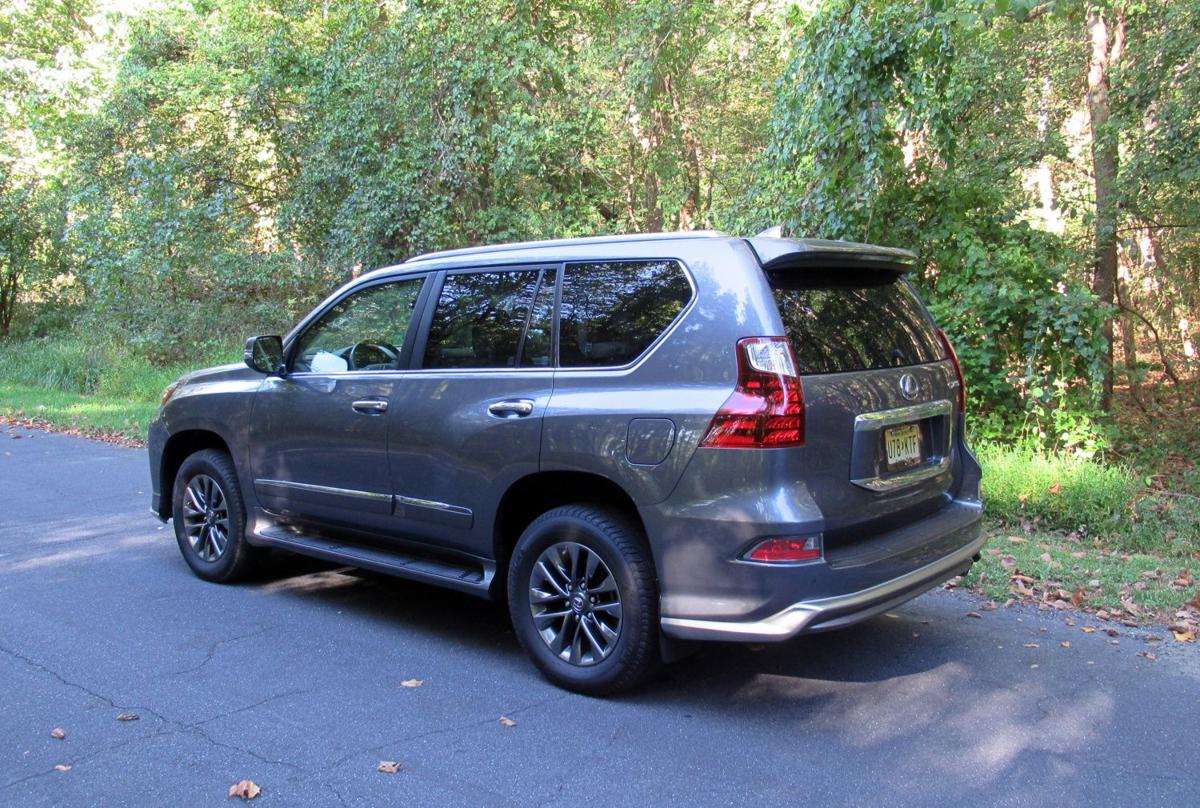 Over the summer, we tested a Toyota 4Runner — a hardy, tough, off-road-ready midsize SUV that time forgot.

It is not only a throwback for its rugged capabilities in an era of light-duty mild-mannered crossovers, but also for its dated interior design, limited infotainment functionality and fuel-thirsty engine.

The 4Runner is like the Jeep Wrangler in that for most drivers, it is a luxury car in the non-traditional sense: not a serene ride and extra-posh interior materials, but for being more expensive and less practical (at least on pavement) than similarly sized vehicles.

But if you want a similar flavor with a higher dose of traditional luxury, you will want the 2019 Lexus GX 460 that we tried out this past week. It shares some mechanical components with the 4Runner and many of the Toyota’s pros and cons — but Lexus’ cabin is a leather-lined cocoon of silence compared to the noisy and comparatively basic-feeling 4Runner.

The GX 460, priced from $53,530, has not changed much since its current generation debuted a decade ago. To loyal buyers, that is just how it should be. This is a hardy seven-passenger SUV in an age of car-based crossovers, which focus on a smooth ride or agile handling, rather than genuine off-road capability or a high-towing capacity.

You climb up into high seats upholstered in rich leather to enjoy a towering forward view of surrounding traffic. The 301-horsepower 4.6-liter V8 engine starts with a bellowing roar, like a modern luxury-grade pickup truck, and the GX 460 glides silently down the road once you’re moving.

Like the flagship Lexus LX 570, the GX 460 borrows from the globally beloved Toyota Land Cruiser family — in the GX’s case, from the midsize Land Cruiser Prado rather than the full-size Land Cruiser. Both are go-to vehicles for the elites of the developing world, where a reputation for exceptional durability is more than a matter of convenience.

In the United States, folks tend to buy full-size pickup trucks to get this flavor, or giant SUVs like the Chevrolet Tahoe and Ford Expedition — which, incidentally, are no less expensive than the GX. That said, while the driver and front passenger enjoy a full-size vibe, the GX’s smaller size becomes obvious if you need to carry passengers or cargo.

To start, there are a couple of inches of cargo clearance with the third-row seat in use (adding up to 12 cubic feet of near-vertical volume from floor to ceiling). Folding the third row opens up 47 cubic feet of space — a respectable figure, though most of that volume comes from height rather than floor space — while maximum cargo volume is a mediocre 64 cubic feet. Awkwardly, the cargo door swings outward rather than up, which needs a lot of clearance to open and which doesn’t offer power operation.

Similarly, rear passengers feel the pinch compared to the first-class front-seat accommodations. This is not a vehicle that was designed primarily to be a family car, unlike luxury crossovers like the Acura MDX and Volvo XC90. The second-row seats (either a three-passenger bench seat or two separate captain’s chairs) are hard and low by luxury standards, and the third row is quite small and difficult to access.

Up front, too, things are not perfect for the driver either. That is because the dated infotainment system is not only outdated, but it never worked very well to begin with. It is missing contemporary smartphone integration, its graphics are tired and its 8-inch size is unimpressive for a luxury vehicle.

It looks like Lexus compensates for this issue with refreshingly simple controls, which were once a brand hallmark. But while there are big, simple buttons and knobs for certain functions, some common climate settings require cumbersome touch screen adjustments.

Other GX 460 complaints could be chalked up to its character. Sure, it does not accelerate effortlessly or handle with agility, but that’s because it is a truck. And sure, it doesn’t get good gas mileage — an EPA-estimated 16 mpg in mixed driving on premium fuel, among the lowest efficiency of any current SUV — but its hearty V8 engine helps it tow up to 6,500 pounds. (The tested truck did beat EPA estimates to average about 19.5 mpg.)

If this character is not a priority, many midsize crossovers offer superior everyday drivability, efficiency, interior space and in-cabin technology. But if you’re looking for a luxury SUV that is built to handle demanding conditions, your choices are limited to Jeeps, Land Rovers and the GX 460. Add an unimpeachable reliability record, and the GX 460 becomes pretty much the only game in town at its price point.

That means you can wish Lexus would improve the GX’s control layout, make the rear seats more comfortable and tease out a few more miles per gallon. But if you want a vehicle like this, you’re likely going to buy it anyway.