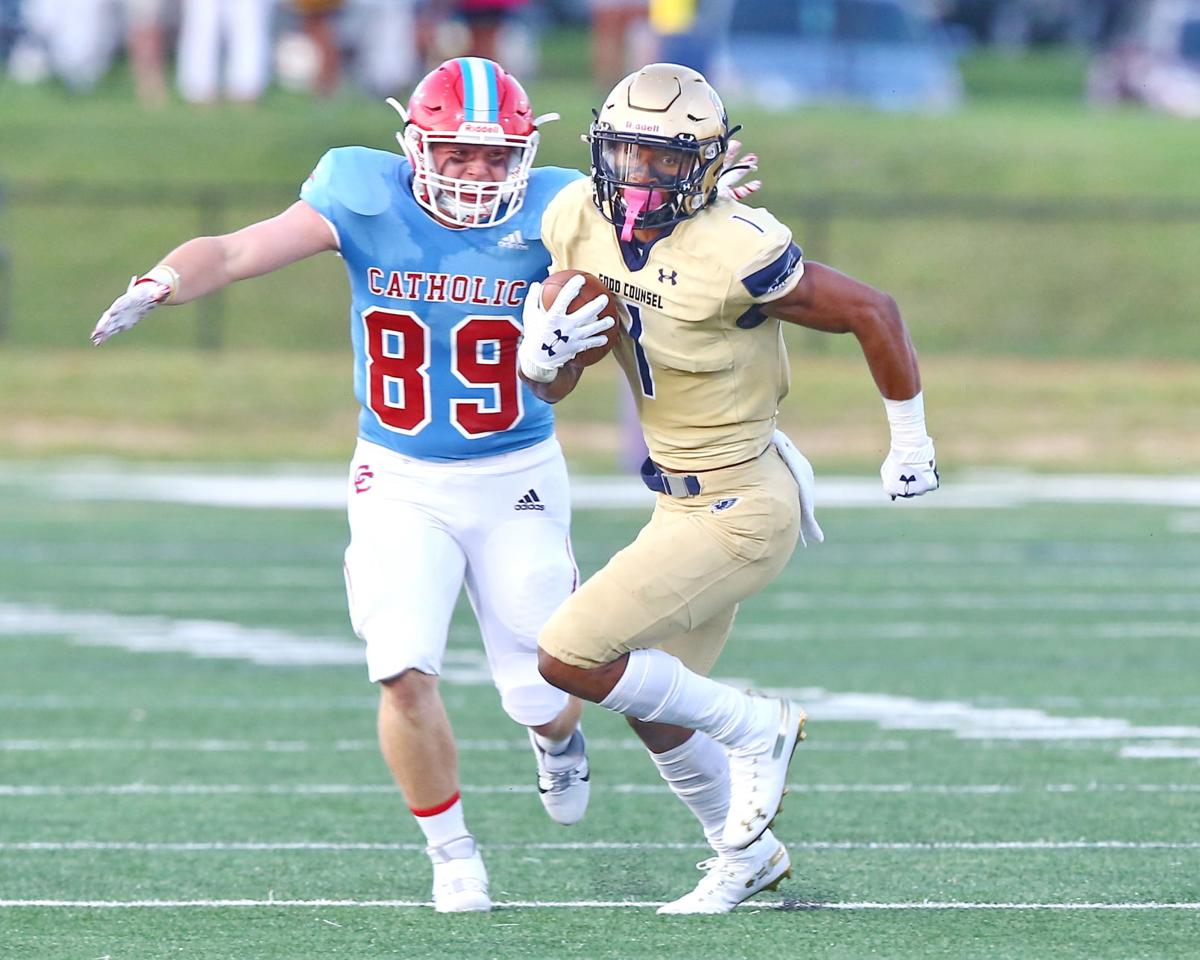 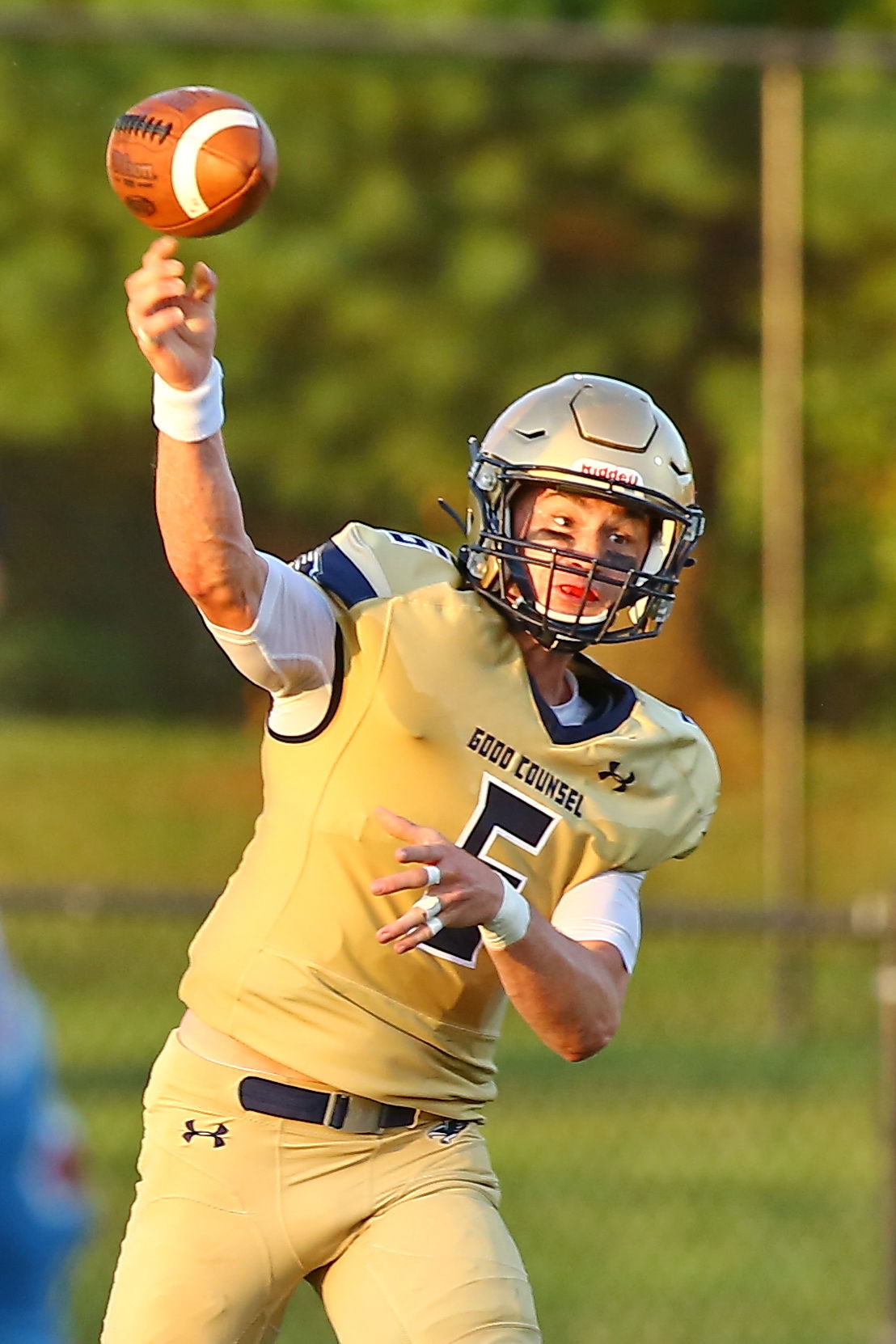 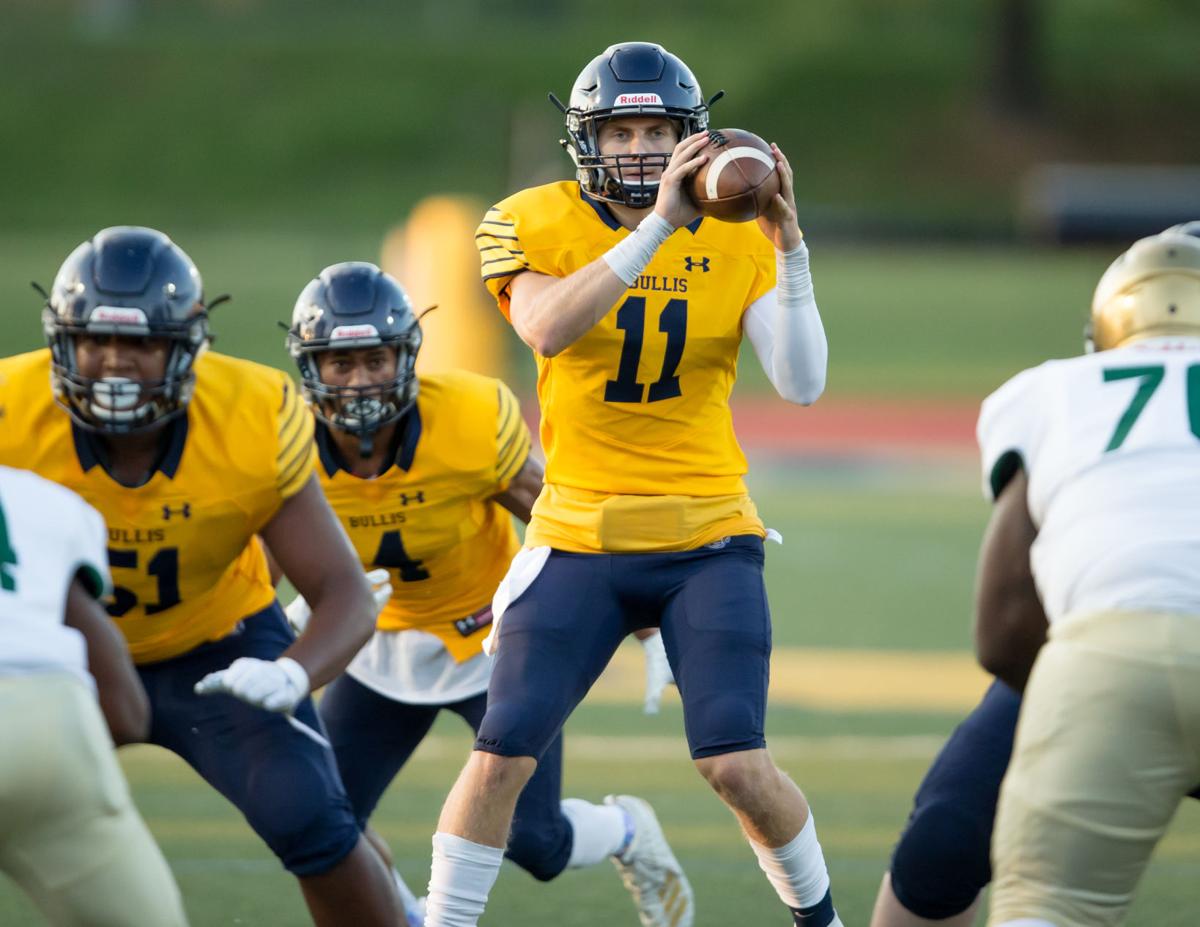 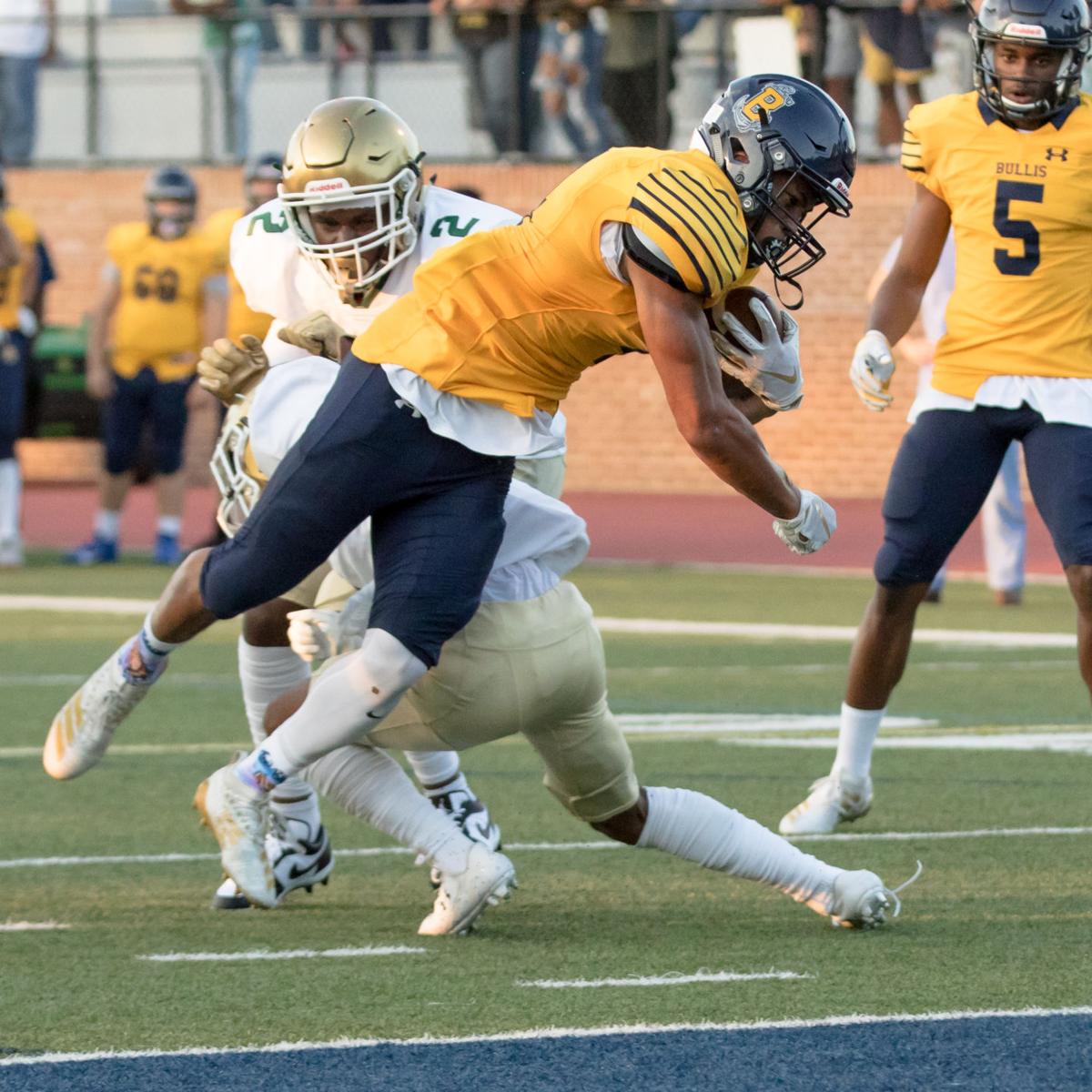 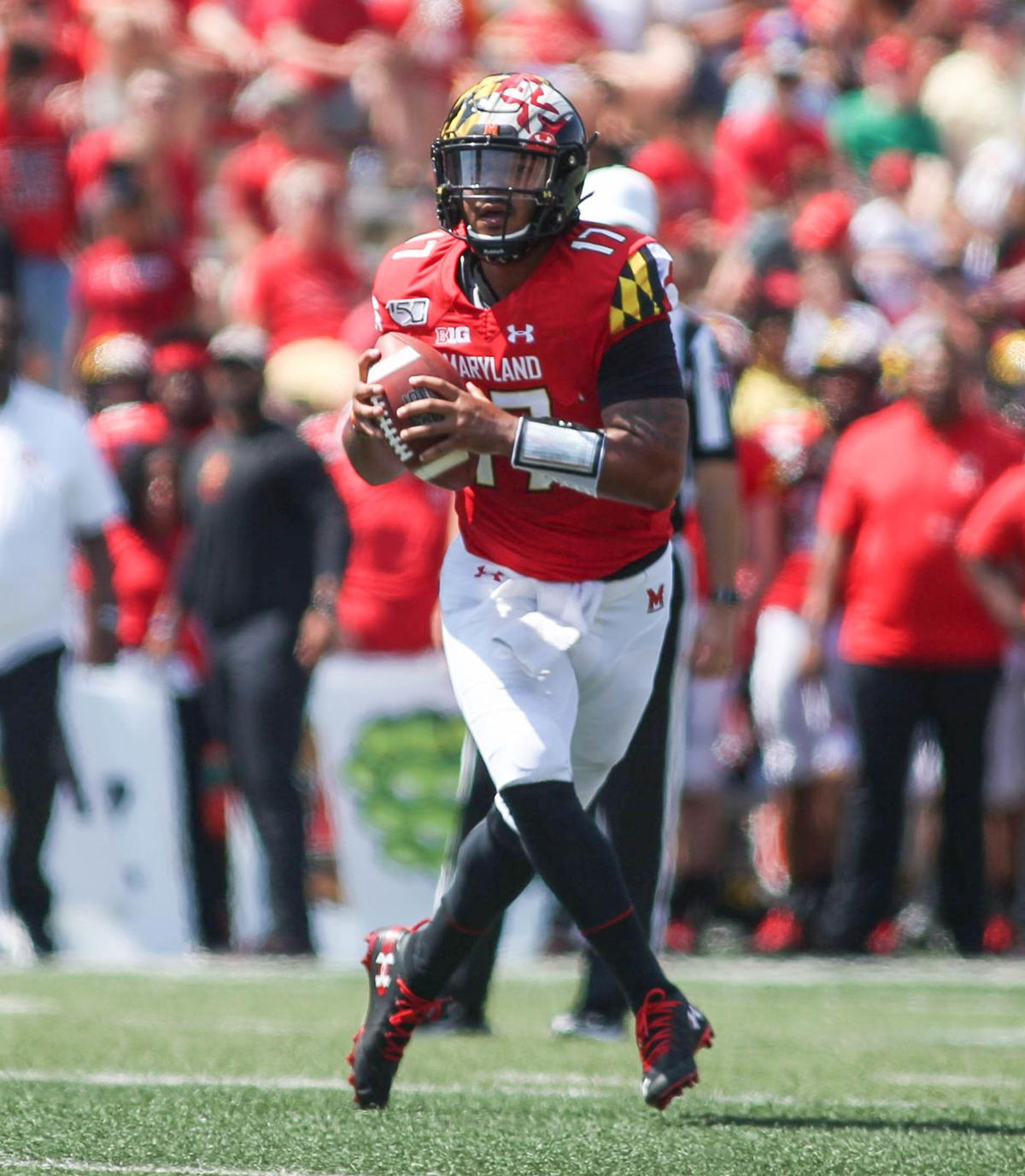 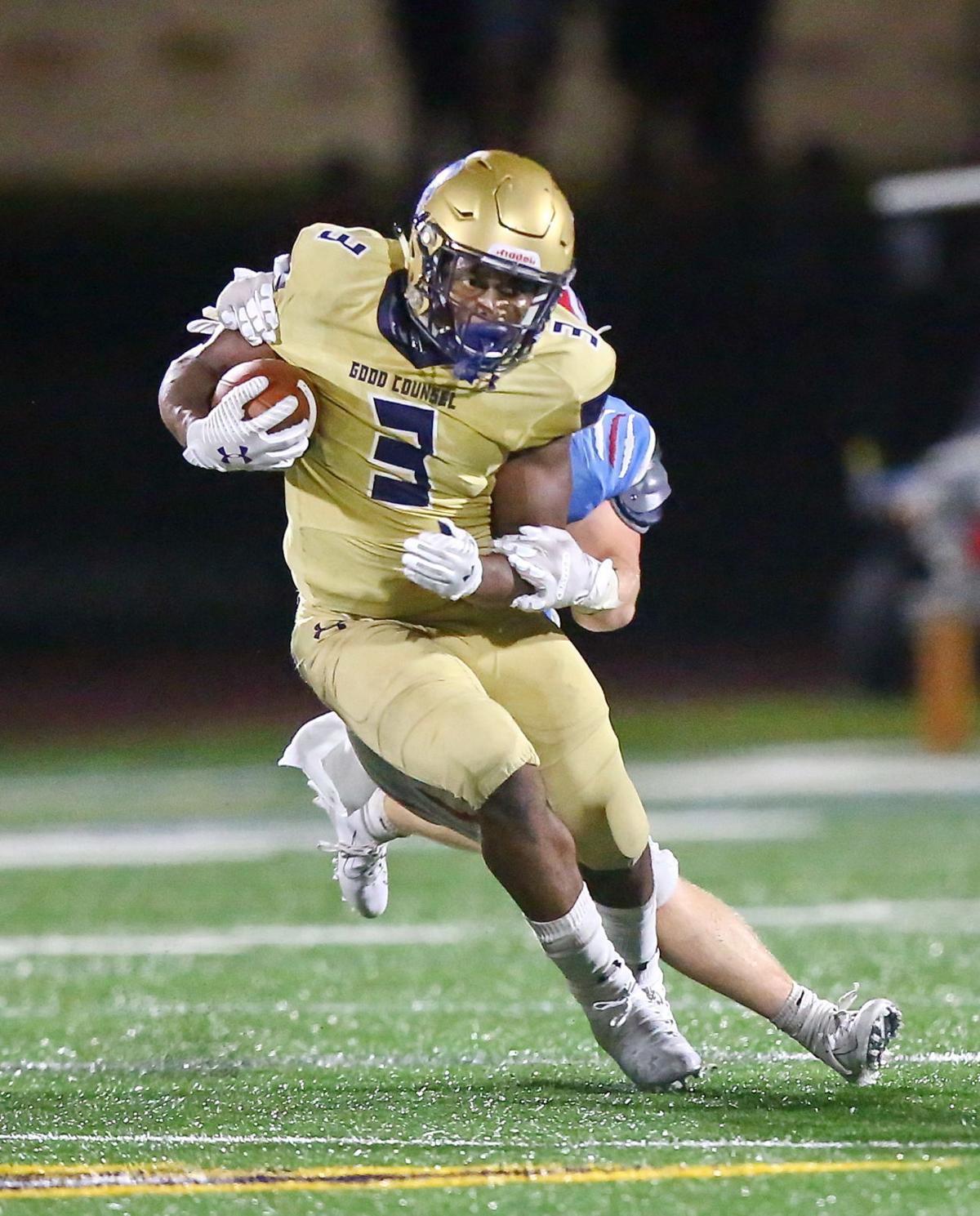 OLNEY – Our Lady Of Good Counsel High School’s football team started their season with one of the most interesting matchups of the county, as they faced a well-traveled Charlotte Catholic High School from North Carolina.

Despite traveling more than 400 miles, the road team was unable to break down the Falcons as Good Counsel earned a 7-0 home win in their season opener on Aug. 30.

The victory for Good Counsel (1-0) was a great start for their season considering their opponent is one of North Carolina’s best football teams. The Cougars (1-1) are coming off of winning their second consecutive North Carolina High School Athletic Association title which is also their third in five years.

However, that championship pedigree did not appear against Good Counsel as the Falcons defense made sure to keep them to their side of the field for most of the game. Charlotte Catholic senior quarterback Jake Smith struggled, getting sacked four times and intercepted once, a frustrating result that was the work of a suffocating Good Counsel defense.

But while the defense was stellar, the offensive line was going through growing pains. Described as “young” by Head Coach Andy Stefanelli, the offensive line let penalties disrupt their momentum and kill plays. All in all, the team finished the game committing 11 penalties.

“Actually, we made some decent plays; we just made too many mistakes, so that gives us a gauge of where we are as a team,” said Stefanelli.

Aside from the disciplinary issues, the Falcons relied on a predictable run game. While it worked against the Cougars, it showed that Good Counsel’s passing attacking needed improvement.

“That wasn’t the game plan,” said senior running back Sy’Veon Wilkerson. “I know we wished we would’ve thrown the ball more, but it was just how the game was flowing. So, if something’s working, don’t break it.”

It was this attrition style of play that had both defenses adapting to the key players on each team. For Good Counsel, the star of the running back corps was Wilkerson. Wilkerson scored the sole touchdown of the game and was a frequent target who adapted to Charlotte Catholic’s defense once they realized that he was the main threat.

The first and closest shot at putting points on the board was for Good Counsel was in the second quarter. After starting from the 50-yard line, they made their way to the 11-yard line courtesy of a 28-yard pass to junior tight end Ronnell McCorn. Wilkerson then dashed into the end zone for the touchdown, before a holding call set them back.

Now at the 20-yard line, Campbell made a risky move and went for a fourth-down touchdown pass at the 3-yard line: it landed in the hands of sophomore tight end Josh Jennings.

Jennings’ celebration was short-lived, as another flag was thrown against Good Counsel for an illegal player downfield.

When neither running into the end zone nor passing into it worked, they went for a failsafe field goal. Senior kicker Vincent Errigo stepped up and miffed the kick wide left, eliciting condemnation from the crowd for a drive that should have ended with at least six points.

In the third quarter, Good Counsel regained possession off of a fumble at the 48-yard line. As they looked to capitalize on the mistake, they fumbled the ball away six plays later and eight yards from the end zone.

Redemption would come in their next drive, proving that the third time’s the charm. In a 10-play, 41-yard drive, it concluded by a short 1-yard run by Wilkerson to give the Falcons the opening lead. Errigo made the extra point to notch the last point scored in the game.

“We are all a unit, and I was just working to get my team the w(in),” said Hatcher.

In the game’s last drive, Good Counsel attempted to add to their lead as time expired but were unable to follow through, stopping 18 yards short from the end zone. The Falcons will look to carry the momentum built from the win to Baltimore on Sept. 7 as they take on Mount Saint Joseph High School.