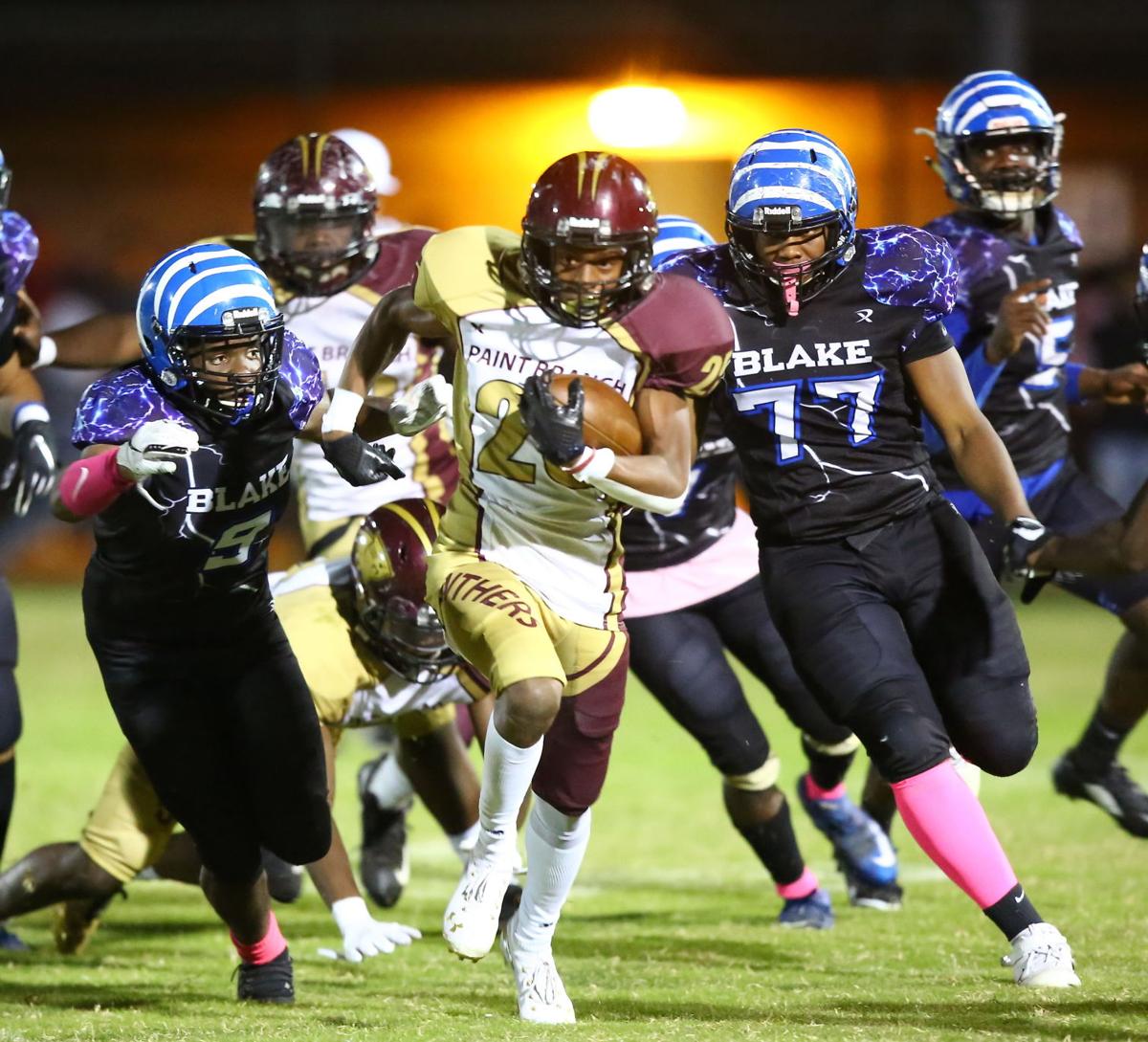 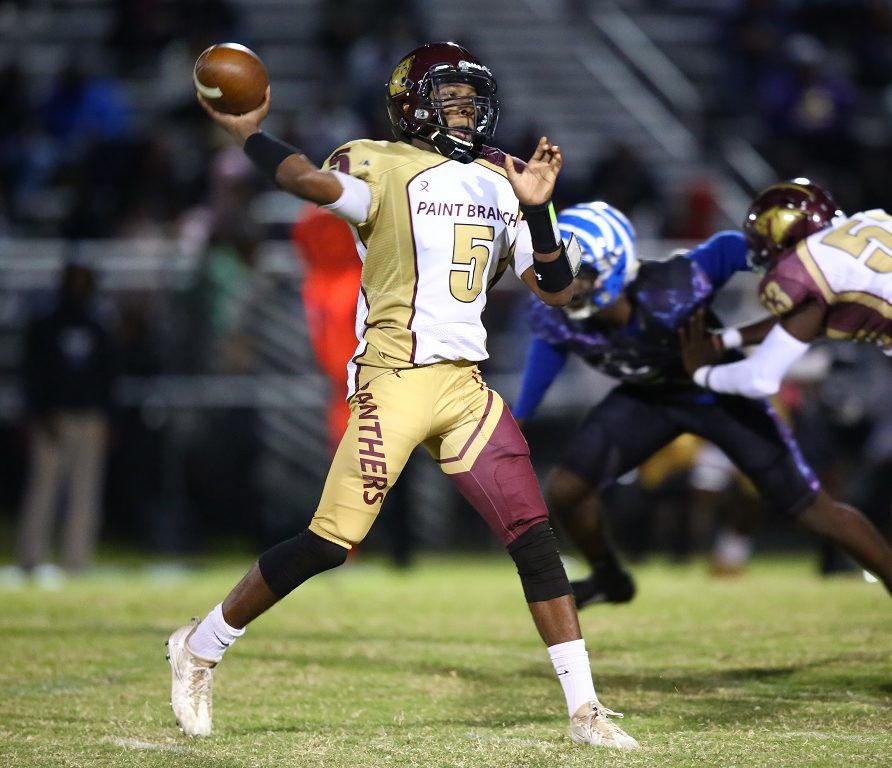 SILVER SPRING – Paint Branch High School defensive back Elijah Grooms chuckled as he skipped gleefully off of Bengal Field on Oct. 11. Grooms had just broken up a fourth-down pass by Blake High School backup quarterback Cyrus Wilson and put an end to the Bengals’ last-ditch effort to produce points in the remaining seconds of the game.

A few plays before that, Grooms ended another Bengals’ fourth-down attempt when he intercepted a pass from starting quarterback Isaiah Smith and kickstarted the game-winning Paint Branch drive. The Panthers took advantage and defeated Blake by a score of 21-7.

[See and purchase photos from this game by clicking here!]

Both teams entered the rivalry game with a 4-1 record, and the evening unfurled as many evenly matched rivalry games often do: emotions ran high, and penalty flags flew onto the field every few plays. The Panthers were penalized three times on Blake’s final possession alone.

Penalties negated big plays and long runs from both sides. A delay of game call against the Bengals on a fourth-down conversion attempt sent Blake backward; the ball ended up in Grooms’ hands a few seconds later.

“We were giving up too many penalties, and we couldn’t really capitalize on turnovers and stuff like that,” said Smith. “We can’t beat ourselves. That’s basically what it was. They’re not better than us at all. We just beat ourselves.”

The evening started in a promising manner for the Bengals, though, as Paint Branch fumbled on the kickoff and Blake junior cornerback Nigil Osei recovered. The ensuing 18-yard touchdown pass from Smith to Dylan Brown was the first and only touchdown of the game for the Bengals as the Paint Branch defense blanked Blake for the three remaining quarters.

Panthers senior defensive back Tobi Adedoyin led the group of defenders who relentlessly applied heavy pressure, but the extra challenge provided an opportunity for Smith to display different aspects of his game. Whenever Smith failed to find an open receiver, the senior called his own number and dashed through gaps in the Paint Branch defense, often picking up a first down in the process.

However, the Panthers came to Bengal Field equipped with a running quarterback of their own. Sophomore Octavian Smith is known for his athleticism, and the Bengals got a firsthand look at Smith’s athletic prowess as he broke tackles and unleashed a spin maneuver for a 17-yard gain, which landed Paint Branch in the red zone.

The Panthers knotted the score at seven apiece after a 23-yard touchdown by running back Wisdom Agbeyome. The senior shared running back duties with Samuel Doku, and while Doku stayed mostly quiet until the fourth quarter, Agbeyome handled the load and marched the offense down the field.

Paint Branch’s go-ahead touchdown came in the third quarter, courtesy of wide receiver Isaiah Russell. The Panthers were facing a first-and-goal at the 3-yard line when the Blake defenders came roaring over the line of scrimmage and sent Paint Branch moving backwards.

Octavian Smith earned that yardage back a few seconds later, and then Russell registered the extra 3 yards for six points. A missed extra point attempt sent the Panthers into halftime with a six-point lead.

Neither team scored in the third quarter, but both the Bengals and the Panthers were penalized several times. Back-to-back flags against Paint Branch negated a long run by Octavian Smith and backed the Panthers up to Blake’s 3-yard line.

“It’s like a PB thing, they just love to call flags on us because we’re very aggressive,” said Doku. “When we came in here, (Blake) was scared, so we just had to bring it to them.”

A holding penalty on the Panthers erased another run by Agbeyome on Paint Branch’s final drive. A sideline violation against Blake preceded a 47-yard dash by Doku; the senior found the open space and landed five yards short of a touchdown.

Agbeyome brought the Panthers even closer to the goal line, and Doku added the exclamation point with the one-yard score. Then, Octavian Smith completed a two-point conversion after a delay of game penalty denied the first attempt.

“The game plan tonight was to keep our composure, come out and do what we do every single night. We focused on our coaches, listened to them, and came out and performed to our standard,” said Agbeyome. “With this rivalry game, there’s a lot of emotions. We went to middle school with some of these people, and we grew up with them, so of course, there’s going to be some emotions. When we grow up we can talk about this game and say ‘yeah, we definitely beat you.’”

Both the Panthers (5-1) and the Bengals (4-2) will play again on Oct. 18. Paint Branch will host winless Northwood, while Blake will travel to face 1-4 Springbrook High School.