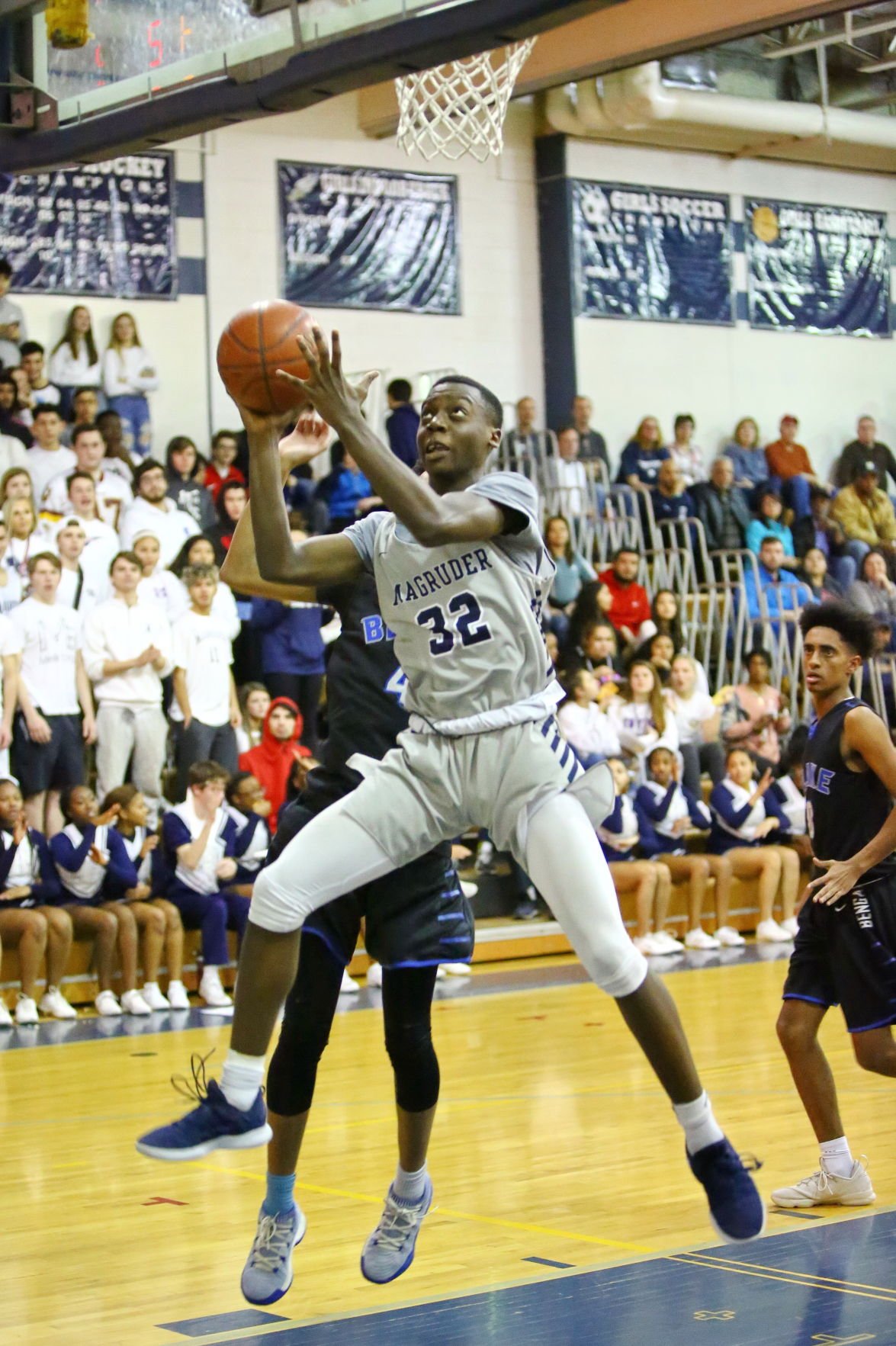 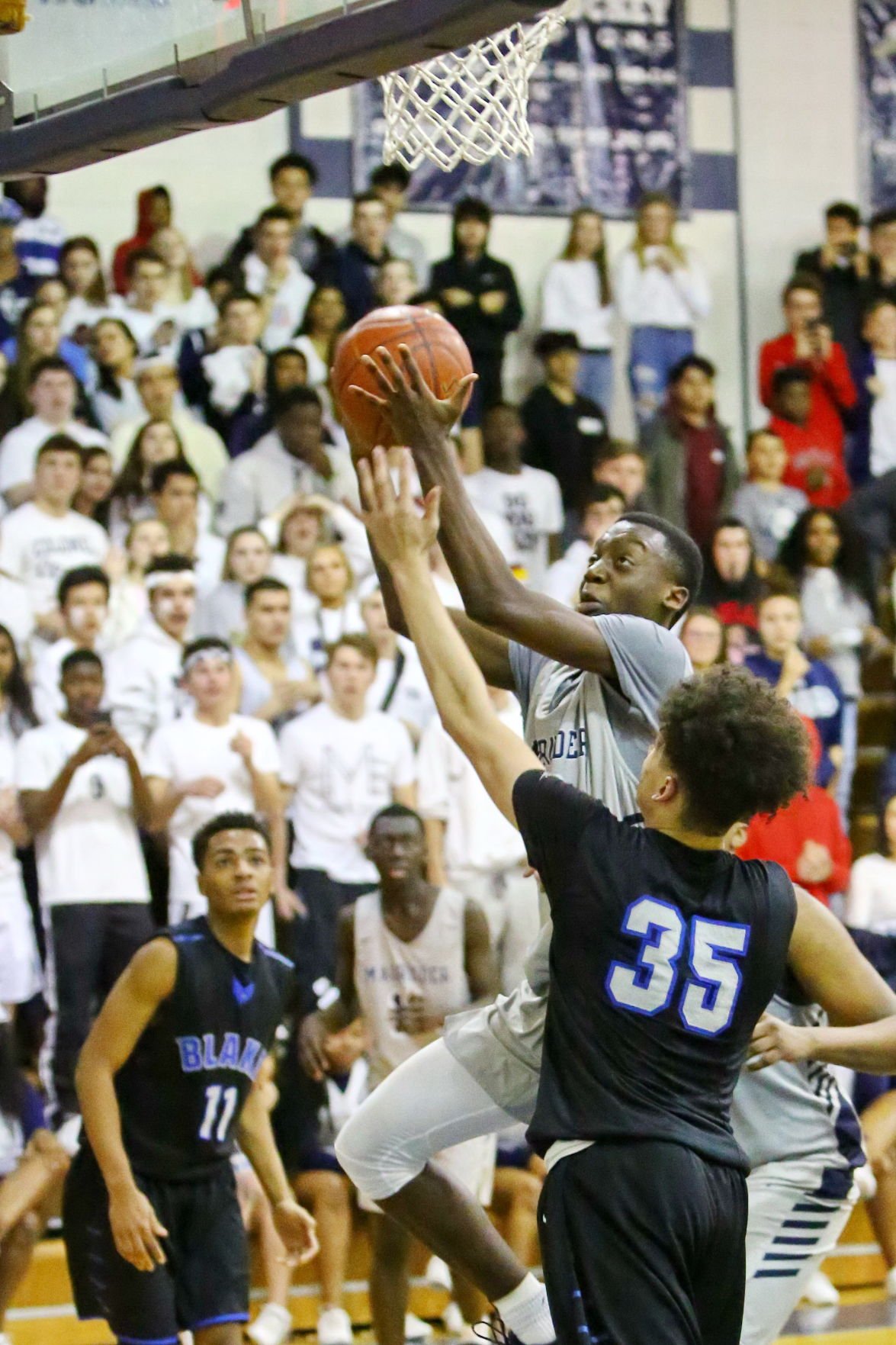 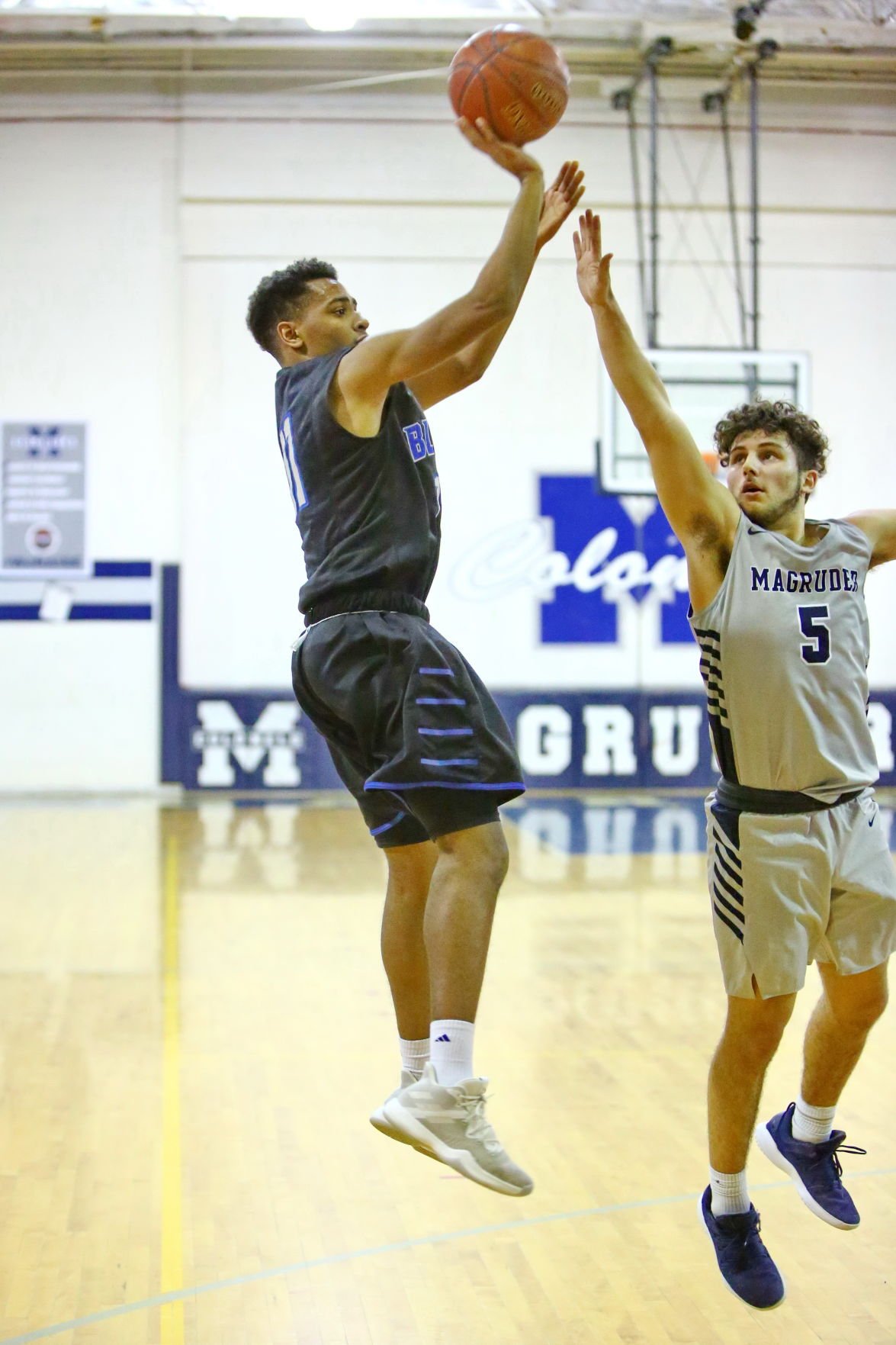 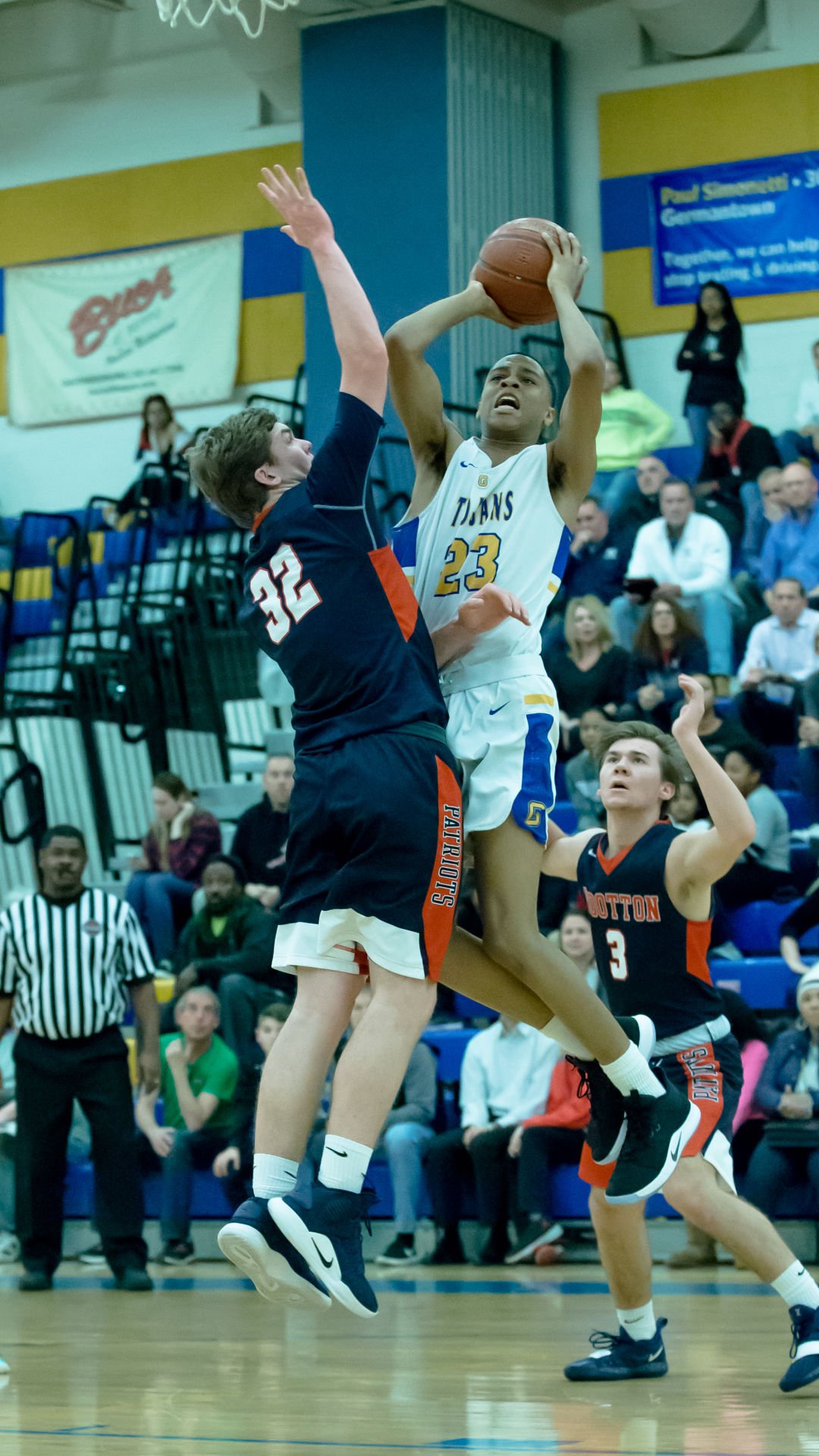 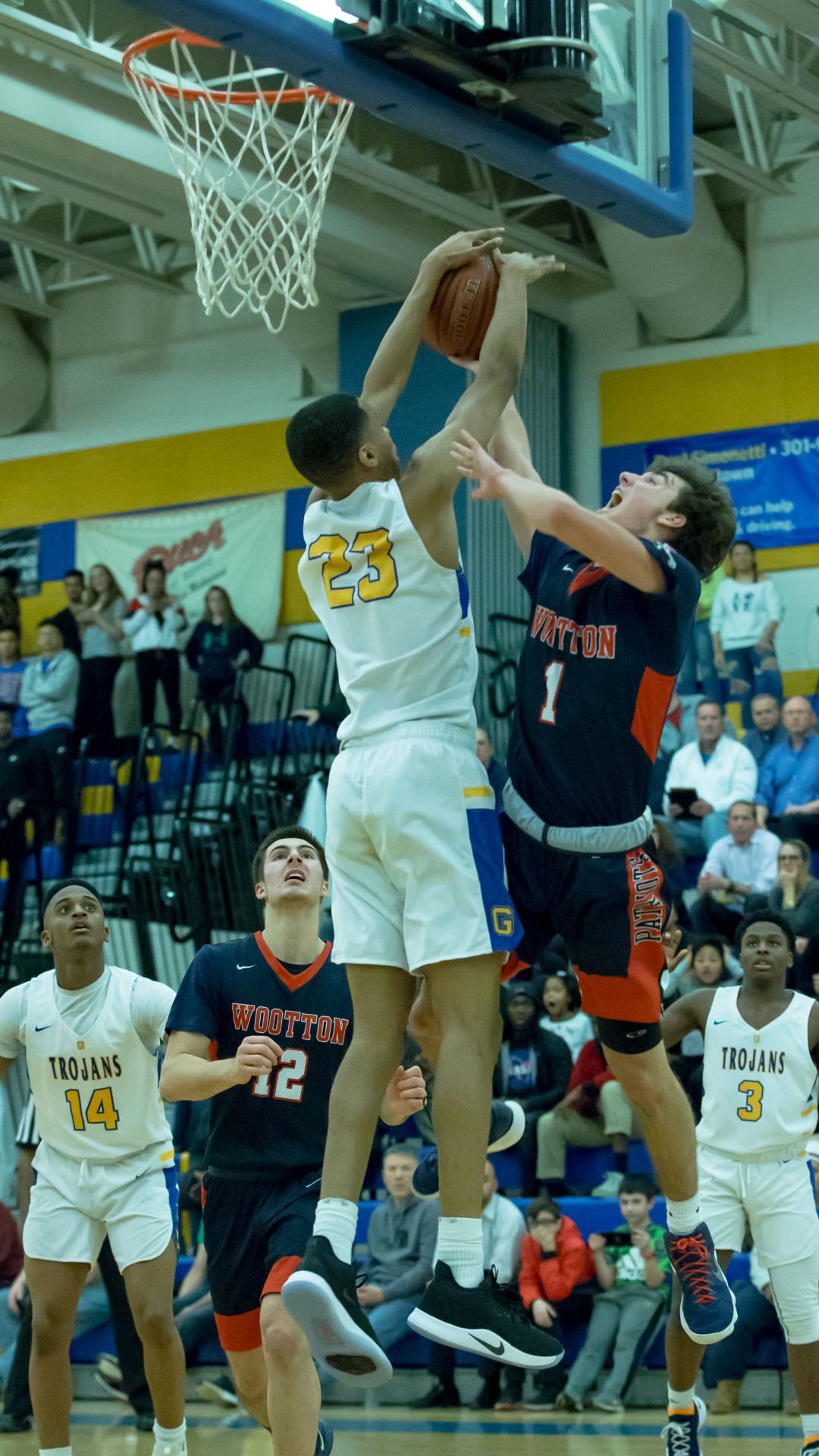 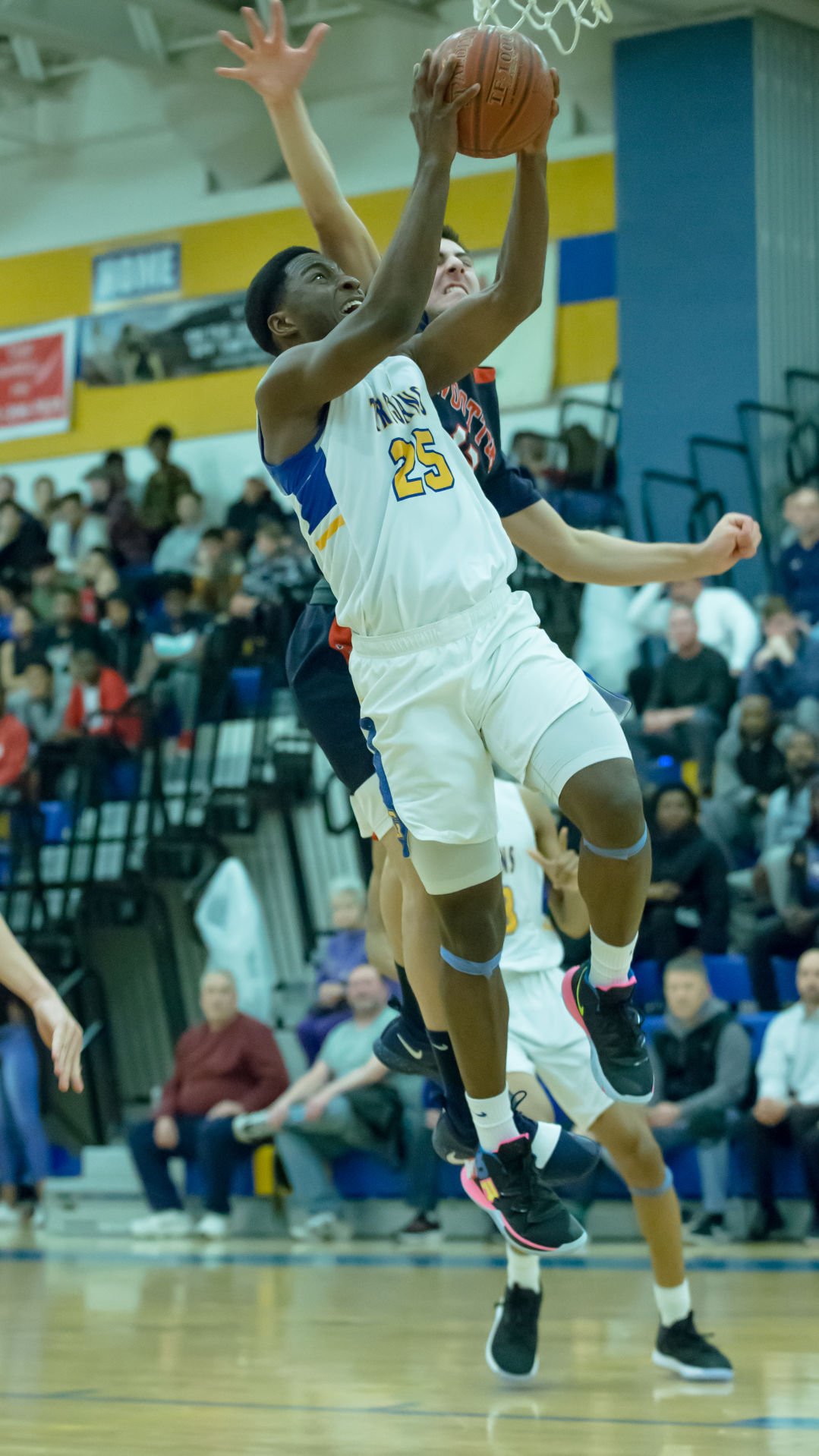 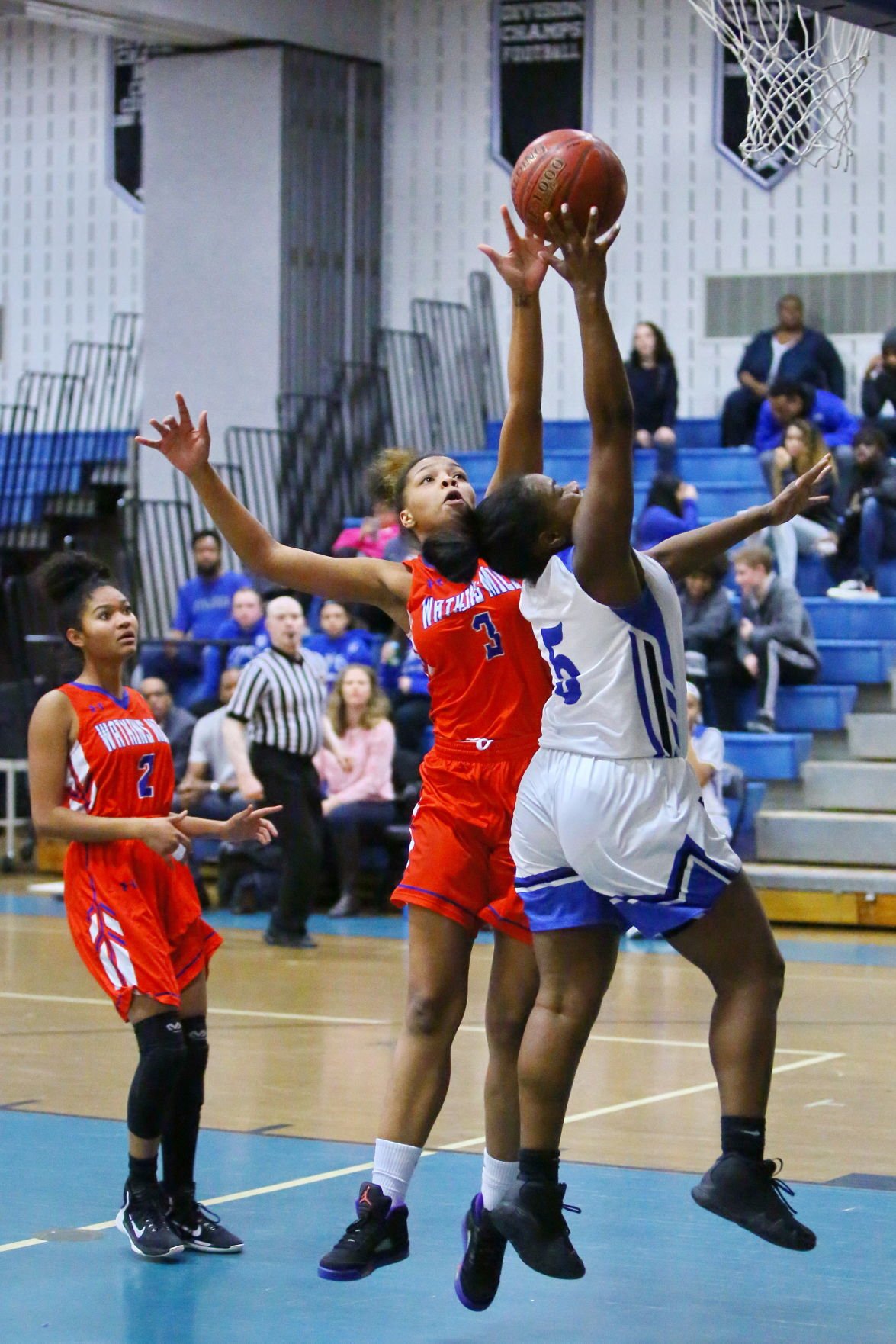 Watkins Mill’s Wahdiaya Memminger (3) swats the ball before Blake’s Victoria Foster (5) gets it to the rim. Photo by George P. Smith/The Montgomery Sentinel. 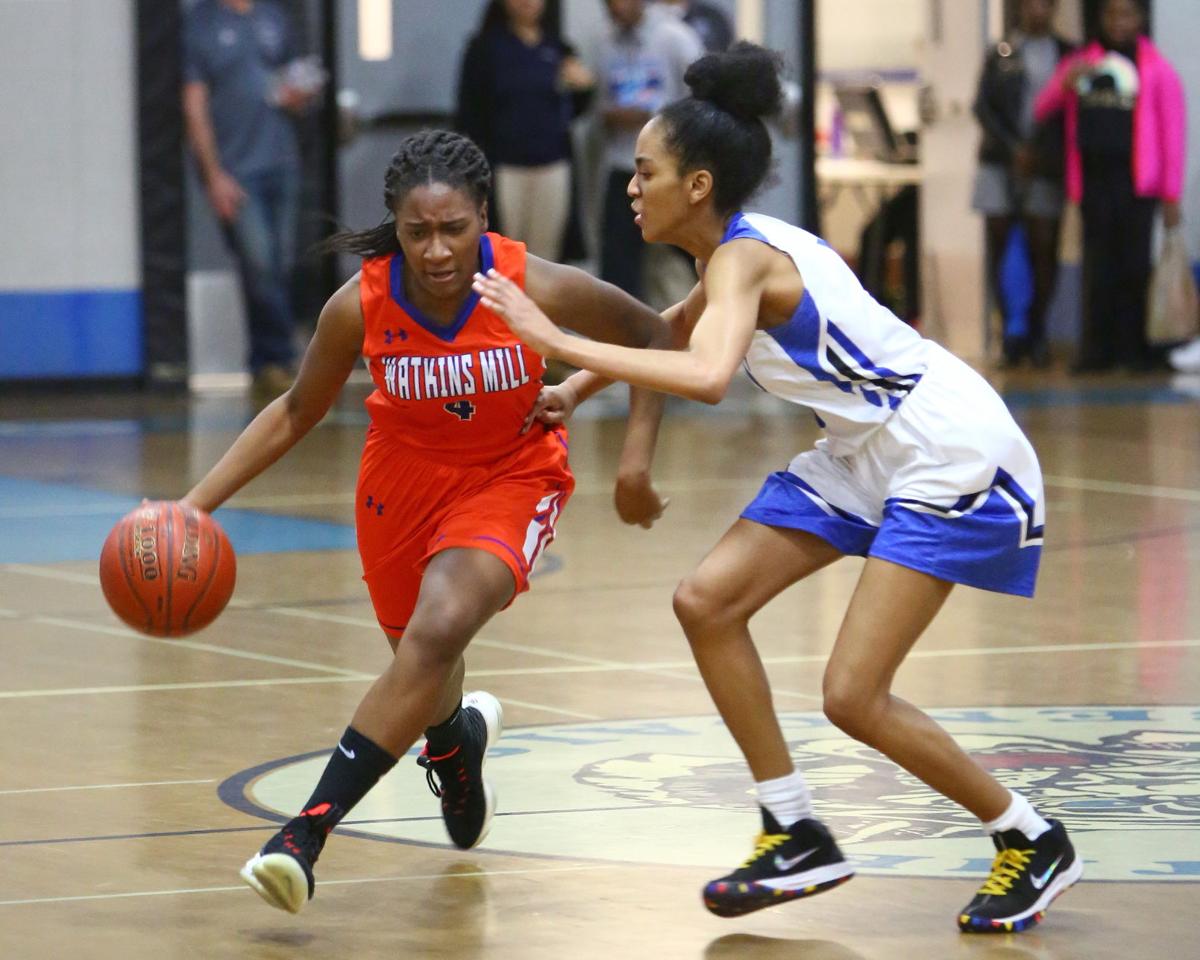 It wasn’t easy though, because the contest got off to an ugly start with a series of missed shots, ball mishandles and repetitive turnovers. Watkins Mill (6-14) led only 4-0 with 2:47 left in the first quarter.

However, the action slowly started to pick up after Nwankwo began her superb performance by knocking down a couple of baskets, leading the Lady Wolverines to a 10-9 lead at the end of the quarter.

“I’m glad that I had my teammates there to support me,” said Nwankwo. “And we supported each other. It was really teamwork.”

However, the visitors got outscored by Blake, thanks to open looks from Janet Truong, Asini Taka and Sydney Konzmann. The trio helped put the Lady Bengals up 16-15 at halftime.

The third quarter is when Watkins Mill seemed to take total control, as Nwankwo added six more points on three shots around the paint.

Though the Bengals struggled to prevent their opponents from scoring in the third, they still kept hope alive, thanks to nine points, including a couple of layups from senior Britney Ferguson, to cut the deficit to 30-25 by the end of the period.

The fourth quarter is when the ultimate drama began, as Watkins Mill continued to drive to the hoop, make their layups and nail their free-throws. Nwankwo continued her dominating performance by registering six more points.

Trailing 41-35 midway through the fourth, Blake found ways to bounce back. Junior Nadia Fox dropped four points in the quarter while Truong nailed one of her three 3-pointers to cut the deficit to one. In their next possession, Konzmann knocked down a jumper inside the arc to give Blakea one-point lead with 3:27 in regulation.

Alas, senior Whodiya Mommiger converted a late free-throw and her teammates rallied to add seven more points to seal it for the Wolverines to advance to the next round. Truong finished the game with a team-high 11 points for Blake.

“I feel confident that the girls will go ahead and continue to do what they’ve been taught,” said Watkins Mill Head Coach Donita Adams. “We were down 42-41 with like three minutes to go, but we kept our composure, stuck to the game plan, and was able to find plays to allow us to take the lead.”

Adams said she enjoys her team being the underdog of the playoffs because of the absence of pressure.

“We always love having that feeling,” Adams said. “Even if we weren’t the underdogs, I know that these girls have been taught the right things and understand what the coaches want and will execute.”

While the Wolverines advance to the second round to face top-seeded Westminster on March 5, the Bengals’ season is over, However, Head Coach Kennith Prather said he could not have been prouder of his team.

“I thought the girls gave a good effort,” said Prather. “Beginning of the year, we had an inexperienced team. Our seniors didn’t get a lot of full time last year. I thought they showed well and competed well.”