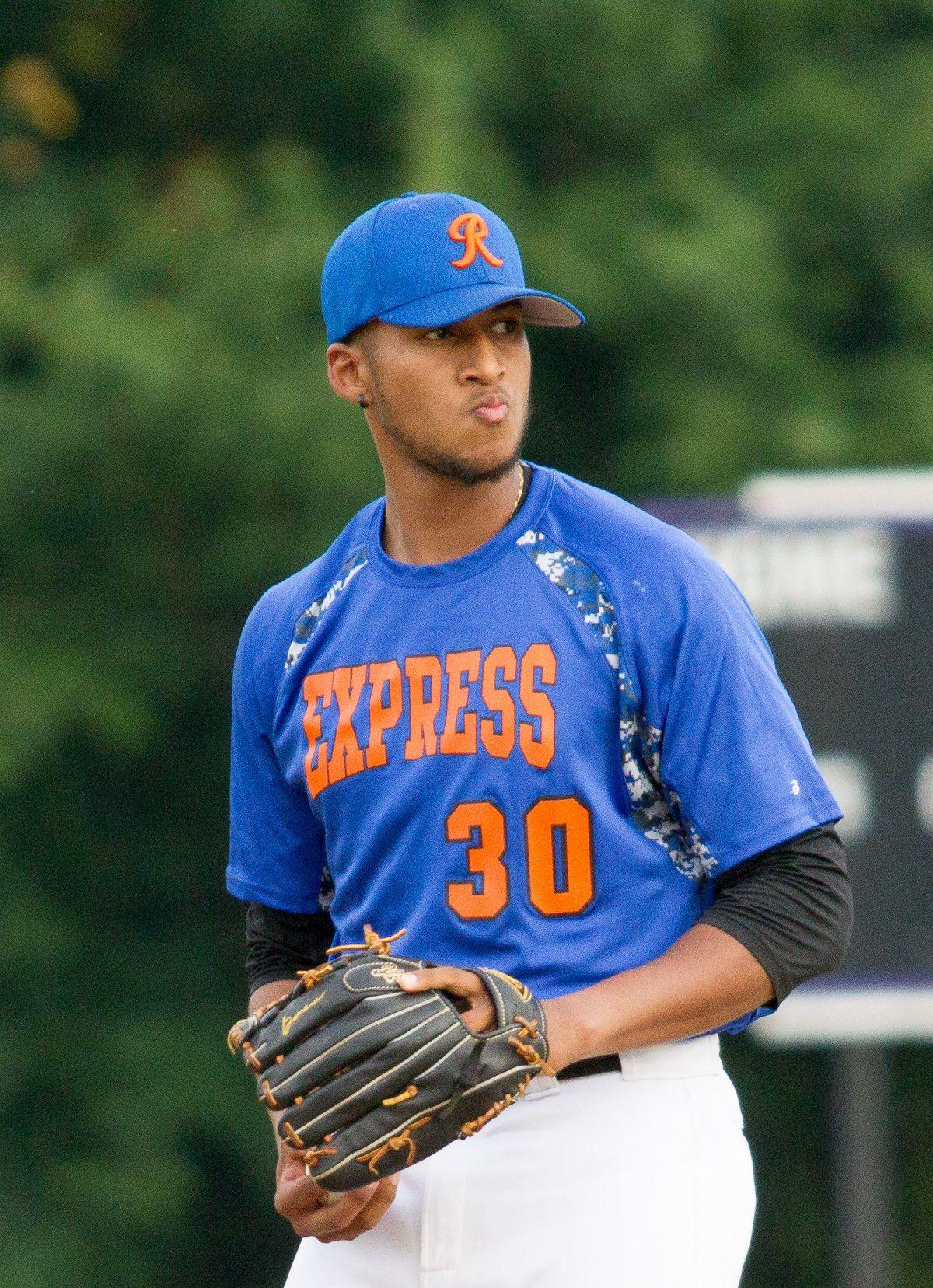 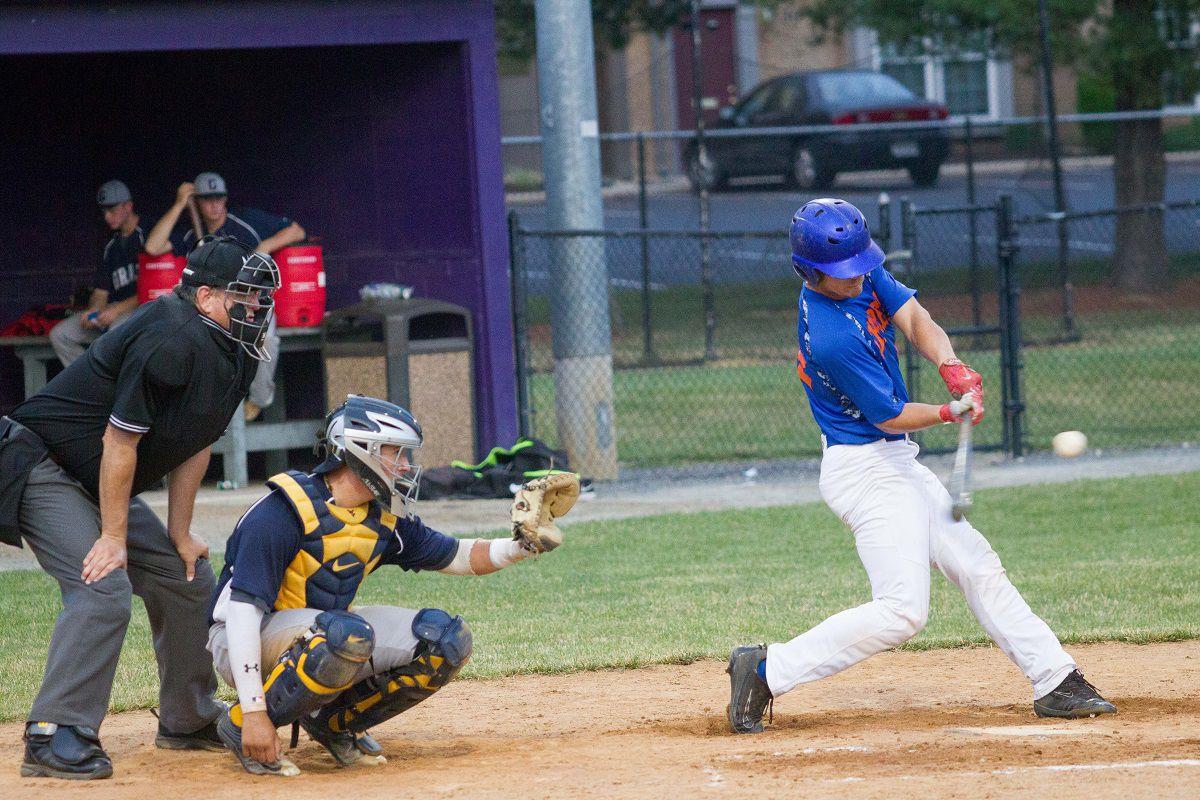 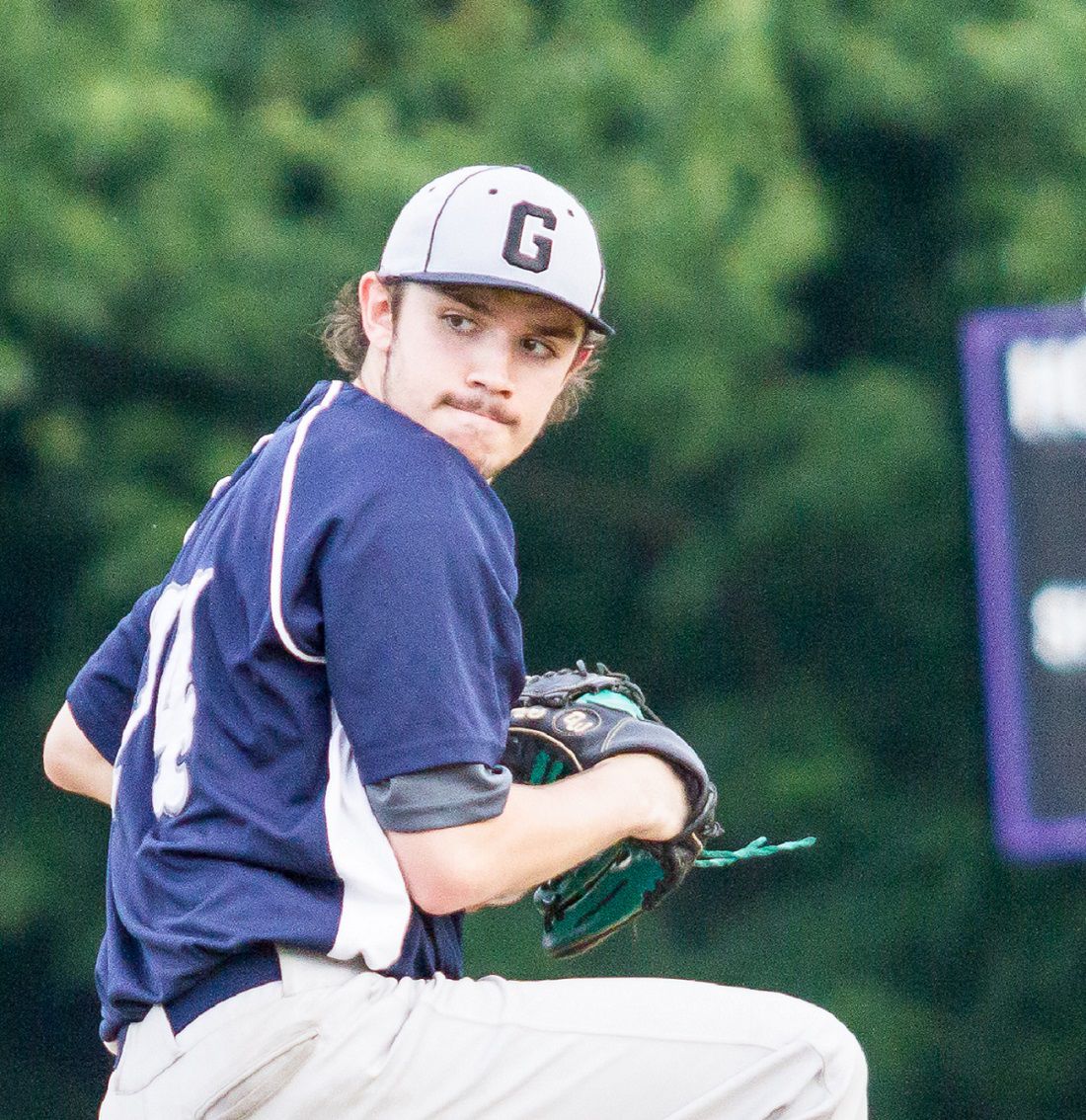 Jacob Barnwell at bat.   PHOTO BY MARK POETKERHowever, Capellan’s first inning was a different story, and it looked as if it would be a long evening for the Express pitcher. He walked two and hit a batter to load the bases with one out. On the ropes, Capellan only surrendered a run on a sacrifice fly.

“That was my fastball. I missed my spots. My mechanics were so bad,” said Capellan. “I was not using my legs. That makes me throw all over the place.”

Express senior catcher Trent Brosdahl said of Capellan’s first inning, “He kept calm the whole time. He didn’t get rushed or anything like that. He stayed with his mechanics the way he should, and whenever I went out there and talked to him, I told him have fun. That’s the biggest thing about this game, having fun. I mean, you’re outside playing a game you love. That’s all you should do is have fun.”

Brosdahl and Capellan made a correction. “I was thinking he didn’t have the best stuff coming straight out,” said Brosdahl. “But the way he came into that third inning was very huge. He started controlling his off speed a lot more, and then he got more comfortable with his fastball, and he was able to move inside and outside with that. So, that was huge for us.”

Cappelan said, “Then in the middle, I made an adjustment because my curve, my slider … my fastball, I was missing my spots. I don’t want the ball in the middle. So, I put so

me work on my pitches.”

Next to pitch, Kruszka effectively shut the door on the Grays.

“I feel like it was a solid performance. Kind of mad I gave up that hit,” said Kruszka. “Not what you want with two outs. I got two quick outs. I just wanted to put them away. So,

that kind of frustrated me a little bit.”

On the hit, Grays sophomore catcher Nick Denicola, who had two doubles and a single to star for the Grays, rocked the ball down the third base line. The ball hit the bag and ricocheted into left field.

The next batter, Grays junior center fielder Will Johnson hit a scorching line drive back to the pitcher that Kruszka got his glove on to end the game.

Kruszka said of his outing, “Yeah, I’m usually a strikeout pitcher. So, I usually start off fastball, then slow up the slider. Splitter kind of the put away pitch. My fastball was cuttin’ real good today. Sometimes I get a lot more movement on it then other days. Today, it was cuttin’ real hard, so I kept with it.”

Grays head coach Reggie Terry said, “Credit goes to their starting pitcher and their closer. Threw seven innings of real strong ball, and he used his fastball as his go-to pitch, and then starting around the seventh inning, he started guys off with his changeup, and our hitters did not adjust. They were sitting dead red and I think pressing to get to the fastball. He had command of his pitches. He was up and down … and then the closer did a good job of coming in and did a nice job pitching to contact.”

Batting in the ninth spot in the order and manning the catching duties, Denicola tried to single-handedly put the Grays on his back. Denicola had been out most of the season with an illness.

“He’s just starting to coming together…”, said Grays head coach Reggie Terry. “Tonight he did very well hitting in the nine hole. I don’t think he’s a nine hitter, but that’s where we put him because he’s been sick.”

Grays sophomore starting pitcher Michael Parsons of Dartmouth College pitched well enough to win yet took the hard luck loss as his Grays were unable to tie or take the lead once falling down 4-3. Parsons matched Capellan with zeros of his own after the third. But each proceeding inning the Grays offense would fizzle against the Express pitching and defense.

As they were down one run entering the bottom of the third, two decisive Express runs would be the difference on a night ultimately decided by Express pitchers and fielders.

“I’m hitting in the two hole, so I’m doing anything to create some offense. So, just trying to get on base and let the RBI guys hit behind me and move me over,” said Galazin.

“He bunted on his own”, said Express head coach Rick Price of Galazin’s bunt single.

A key error and a walk would load the bases with no outs for Express junior left fielder Justin Smith.

“I knew bases loaded nobody out he was going to come at me quick,” said Smith of his at bat. “So, I tried to jump on the first pitch fastball. Usually, I can get a nice pitch to handle first pitch. I hit that the best, and that’s what I got.”

Grays second baseman Rahman Williams made a diving stop in the second base hole to corral the ball hit by Smith, but it was too late to get Smith.

“Basically the second baseman made a nice play, but there was nothing. So, I was safe and we scored … I know runs are hard to come by in this league, and whenever you can have some, especially with Ceasar pitching the way he does, it’s good to have support for him. You know, he’s going to get the job done. I know it was big at that time. It tied it. At the time, it was huge.”

The next batter, Brosdahl, would give the Express the lead for good as he hit an RBI sacrifice fly to center. Express freshman centerfielder Pearce Howard scored on the play. It stands as Brosdahl’s first game-winning RBI of the season.

“I was up to bat, and the one thing that was on my mind is getting the ball in the air and getting it deep enough to be able to get that run in, and there’s no better feeling then getting a sac fly,” said Brosdahl.

“I mean, a sac fly is an important part of the game and to see it on the scoreboard it’s huge. It means a lot.”

Terry blamed the loss on the Grays’ lack of execution as he said, “When we execute, we win. When we don’t, we lose.”

Check out the photo gallery for this story!