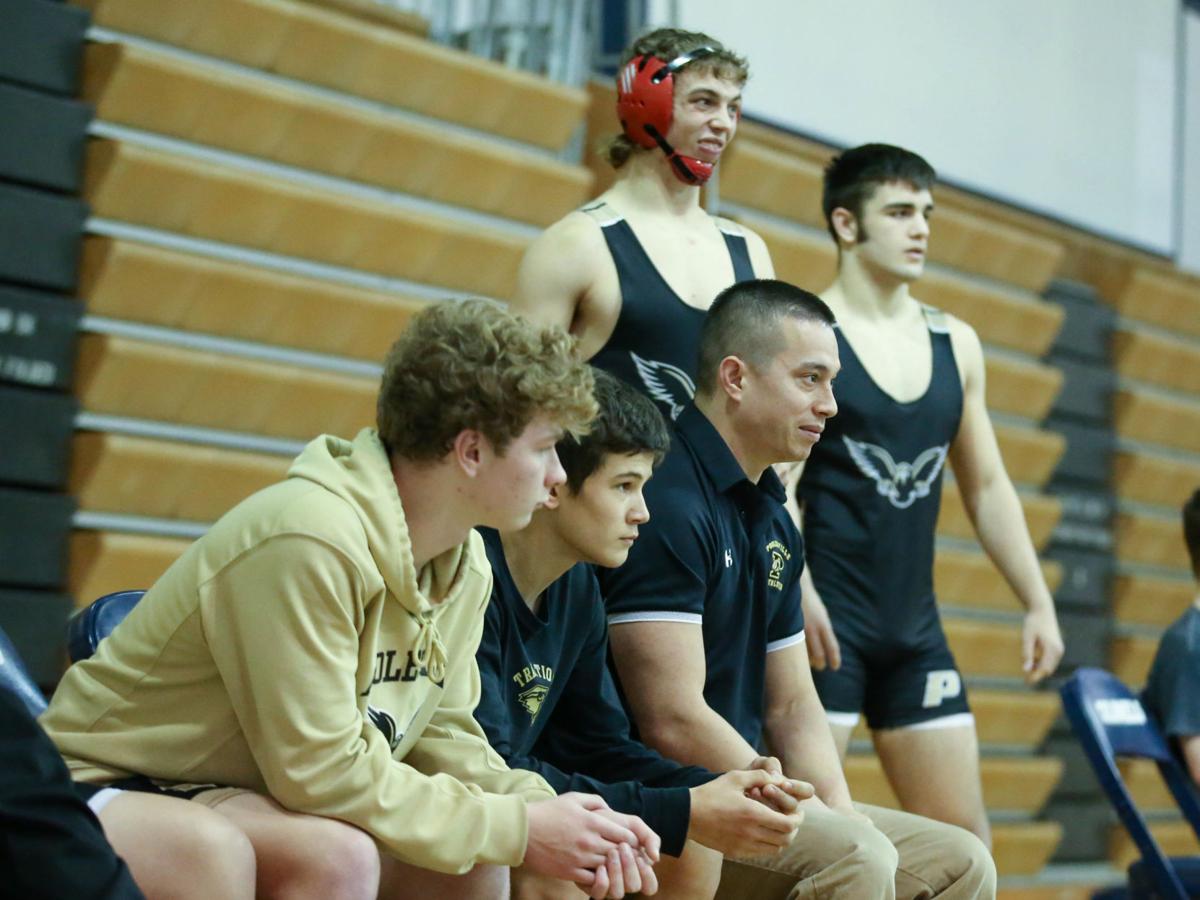 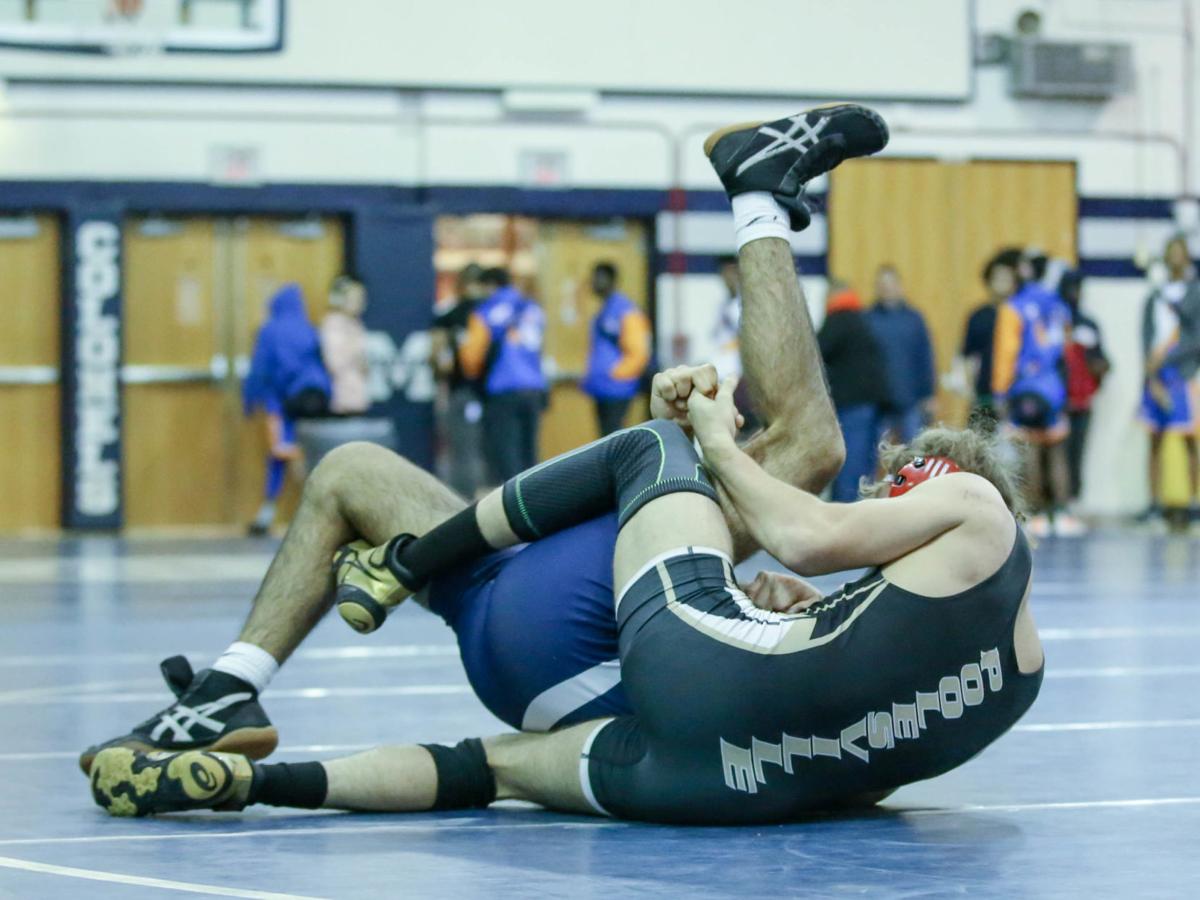 Sophomore Mike Sofelkanik (113) and freshman Mason Hillegas (120) nailed down two pins each, being among Poolesville’s seven double-winners during tri-meet victories, 43-33, over host Magruder High School, and, 72-12, over Watkins Mill on Jan. 25.

[See more photos from the tri-meet by clicking here!]

Sofelkanik earned his 18th and 19th wins on the year with falls in 30 and 62-seconds, while Hillegas won his 18th and 19th match on a pair of second-period pins for the Falcons (9-0). With the team win, Poolesville Head Coach Tim Tao improved his record to 8-1 against younger brother AJ, who guides the host Colonels.

Freshman Sam Stempler (126) improved his record to 26-12 on a fall and a forfeit to add to Poolesville’s dominating day as Tao family watched both sons competing against each other. Tim and AJ are the products of a Chinese father, Freeman, and a Caucasian mother, Manette, who called the encounter “The Tao Bowl.”

Among four siblings who wrestled at Wheaton for Head Coach Dave Moquin, a Maryland Public Secondary Schools Athletic Association Wrestling Hall of Fame inductee, Tim placed as high as second at counties and regionals and fourth at states competing from 103 to 130 pounds before graduating in 2000. It was the highest finish by a Tao family member at the time since elder brother Matt’s state runner-up finish as a 160-pound senior in 1999.

In 2003, AJ topped all of his brothers’ accomplishments as he became a two-time county runner-up, qualifying for states three times while wrestling between 103-to-125 pounds. In coaching, Tim Tao has the edge, for now, winning the tri-meet despite missing key starters from his lineup.

Coming into the tri-meet, Sofelkanik was able to get into the weight limit to complete in his class and to earn a win over ranked wrestler Justin Benitez from Watkins Mill. Meanwhile, Hillegas’ win over Magruder’s Bryce Houldsworth via pin was a “nice surprise” to cap off the successful day, Tim Tao said.

“I’m very proud of how tough my guys wrestled as they knew the personal importance being the Tao bowl as well as having regional implications for us,” Tim Tao said. “Our Class 2A West Region is super difficult, and even just one loss can mean not making it, so we knew we had to win and that Magruder is a tough team with some really good individuals.”

Senior Colin Savage, who has placed third at states, improved his record to 35-1 with his 23rd and 24th falls in the first period at 160 against Watkins Mill and 22 seconds at 170 against Magruder. The Falcons’ senior third-place state finisher Xavier Kresslein (182), earned a first-period fall and won by forfeit, improving to 36-0 with 27 pins.

“Colin went up to 170 and was able to pin another one of Magruder’s tough kids, Qais Haeder, who was coming off of an 8-0 champion run at the Rebel Duals,” said Tim Tao. “We got enough momentum from the early matches to build towards the win.”

Sophomore Jackson Barney pinned in 66 seconds and won a major decision, the latter by 15-7 at 160 pounds against the Colonels to improve his record on the year to 30-7.

“We felt that if he could win, we could save Savage for 170,” said Tim Tao. “We had no choice but to bump everybody because our regular 182, Aden Godsey, wasn’t able to come to the match, so it was either bump or forfeit. Jackson wrestled tough and was able to get the major decision.”

Falcons’ junior Kevin Fultz earned a decision and received a forfeit at 145 and 138, respectively, rising to 32-3 with 20 pins.

“I tried to go for matchups with Kevin Fultz going against another one of Magruder’s county ranked kids at 138 in Josh Thomas,” said Tim Tao. “We luckily didn’t have to send first at 138, so when Magruder bumped Thomas to 145, we were able and ready to send Isaac Feny out for the forfeit at 138 and bump Kevin to 145 for the match up vs. Thomas.”

In other news, Bethesda-Chevy Chase High School earned a 54-15 victory of Sherwood in a dual meet on Jan. 25. Sophomore Isaac Guttentag (120) earned a decision over Brandon Holda, 5-2, while Estafanos Meknee (126) did the same to Holda’s twin, Brady, 7-5. The Barons also received decisions from Sam Moffitt (106) and Alhassane Kouyate (285).

The 12-team field was comprised of those from Maryland, Washington, D.C., and North Carolina, which competed in pools followed by a championship round robin tournament. The top four teams, in order of finish, were the Bulldogs, North Carolina’s Charlotte Latin, St. Mary’s Ryken of St. Mary’s County, and Gonzaga.

In their 40-37 triumph over Gonzaga, the Bulldogs received an 11-0 major decision from senior Austin Brown (182) over 195-pounder Kadari Machen of Gonzaga. Bullis also received falls from junior NaSir Wilkinson (120), freshman Meyer Shapiro (126), junior Damon McGee (138) and junior Gene Quodala (145). The Bulldogs won their Gold Pool championship, 47-33, over St. Mary’s Ryken on the strength of pins from Quadala, Brown and Wilkinson.

The Bulldogs will look to remain unbeaten for the rest of the regular season and become back-to-back Interscholastic Athletic Conference (IAC) dual champions. However, their first shot at championship goal this year comes on Feb. 1 as they host  to the IAC championships. They will look to win their second consecutive crown in that format.