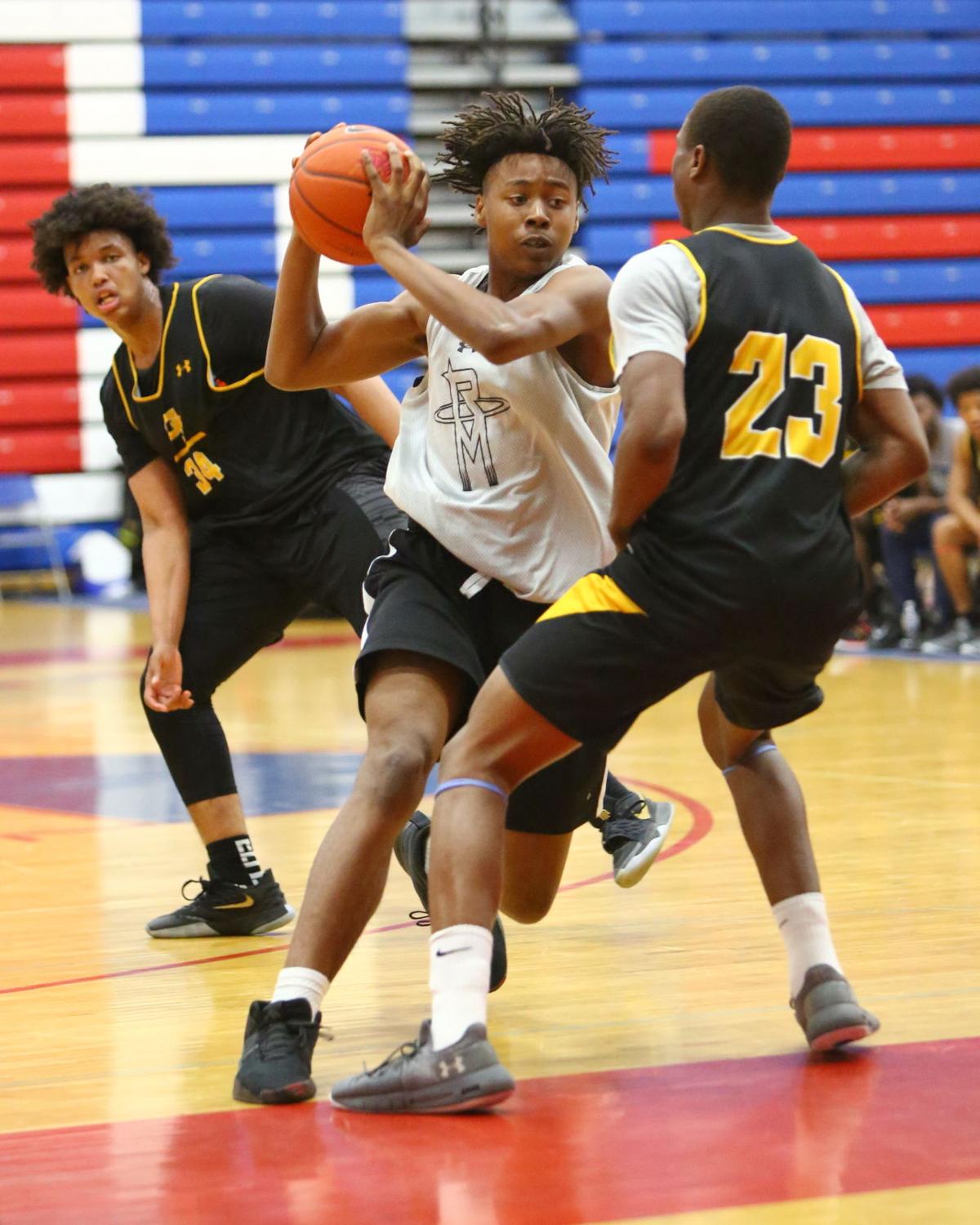 Richard Montgomery’s Shaq Samuels (20) has to pull up and dish as Gwynn Park’s Markeith Franks (23) gets into position to take a charge. Gwyn Park’s Benjamin Roberts (34) looks on. 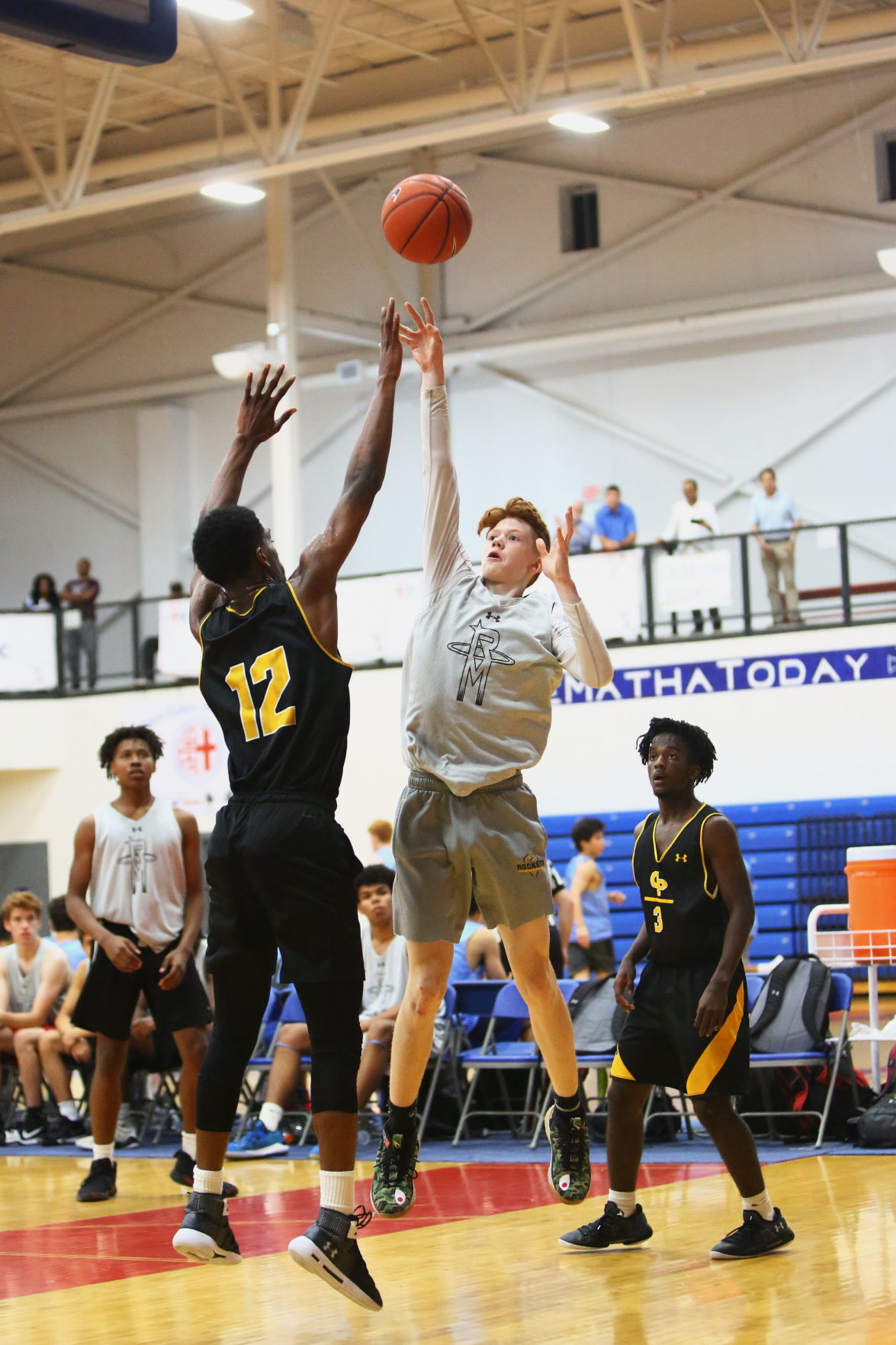 Richard Montgomery’s Ryan Cornish with a runner for 2 over Gwyn Park’s Darius Joyner (12). Cornish was 3-8 beyond the arc and 9-17 inside the arc for 28 game points – the high scorer for RM and the game.

Richard Montgomery’s Shaq Samuels (20) has to pull up and dish as Gwynn Park’s Markeith Franks (23) gets into position to take a charge. Gwyn Park’s Benjamin Roberts (34) looks on.

Richard Montgomery’s Ryan Cornish with a runner for 2 over Gwyn Park’s Darius Joyner (12). Cornish was 3-8 beyond the arc and 9-17 inside the arc for 28 game points – the high scorer for RM and the game.

[Check out our gallery for more photos of this game.]

HYATTSVILLE – When Richard Montgomery High School’s boys basketball team faced off against Gwynn Park from Prince George’s County in the Capitol Hoops Summer League on June 11, the Yellow Jackets were undefeated, and the 5-1 Rockets had lost to Eleanor Roosevelt by just one point.

It was fitting, then, that the two strong squads engaged in an aggressive seesaw game, which featured a four-minute overtime period after regulation came to a close, with the score knotted at 69 points apiece. In the end, a pair of lay-ups by Richard Montgomery center William Davenport-Thomas proved to be just enough for the Rockets to hand Gwynn Park their first loss, 79-77.

The win didn’t come without its mistakes, though. In addition to playing eight games in eight days, the Rockets were coming off a pair of big wins against two other PG County high schools, Surrattsville on June 9 and Oxon Hill on June 10, and fatigue was starting to settle in. Both Davenport and Richard Montgomery guard Ryan Cornish tallied four fouls apiece; the penalties forced Cornish to spend valuable minutes on the bench.

At first, the Rockets nursed a substantial lead by double-teaming, and sometimes even triple-teaming, Gwynn Park’s ball carriers. The Yellow Jackets had a tough time penetrating into the paint, and when a Gwynn Park player managed to cut through the Richard Montgomery defense and pull a foul, many of those free throws missed their mark.

However, despite its free-throw woes, Gwynn Park still hung around. Forward Markeith Franks and guard Darius Joyner delivered when their team needed them the most. They combined for 30 points to keep the Rockets from running away with the game.

Richard Montgomery stayed a step ahead until Franks landed a basket that resulted in the first tie of the evening. Then, Joyner delivered the go-ahead lay-up to erase Richard Montgomery’s game-long lead fully.

Before the Yellow Jackets could get too comfortable, though, Cornish came off the bench ready to make a statement with a three-point bucket that put the Rockets back in the lead. Richard Montgomery forward Shaquille Samuels answered Cornish’s trey with one of his own to establish a five-point Rockets lead.

“We played good under adversity. They had a bunch of runs, and we came back after them,” said Cornish. “But we should have limited the fouls and turnovers; we had too many of those.”

However, Gwynn Park continued to match Richard Montgomery’s intensity, and Joyner and Franks worked in tandem to tie the game and send both teams to overtime.

The Rockets took their time as the seconds ticked away in the extra period. Junior guard and Player of the Game Jabril Robinson dribbled slowly down the court as Richard Montgomery set up shop on offense. Then it was time for Davenport to seal the deal. The rising senior used his 6-foot-8 frame to box out under the basket and keep the Yellow Jackets at bay while he completed the pair of lay-ups that proved to be just enough for a Rockets victory.

“We had some opportunities to win the game, and we didn’t capitalize on them,” said Gwynn Park Head Coach Rob Garner. “Turnovers, shot selection, things of that nature… missed box-outs. You can’t beat a Richard Montgomery if you’re not going to be able to execute every second you’re on the floor. The intangibles of a box-out could cost you the game. One bad shot could lead to a wide-open three-pointer in transition for them.”

For Breslaw, summer league provides an opportunity for the Rockets to play against competition they are unfamiliar with, especially teams like Gwynn Park and the defending 4A champions, Eleanor Roosevelt. Richard Montgomery was just one win away from facing off against the Raiders in the state championship game last March, but a state semifinals loss against Broadneck from Anne Arundel County kept the Rockets out of the title game.

“It’s no mystery that when you play 20 games in Montgomery County, you’re going to see some quality teams,” said Breslaw. “But you’re also going to see some teams that aren’t going to challenge you as much. In the postseason, as we just learned, we need a more-diverse set of talent to play against.”

Next up in the Capitol Hoops Summer League, Richard Montgomery is scheduled to face Riverdale Baptist School on June 14. Meanwhile, Gwynn Park will meet another Montgomery County team, Blair, on June 13.