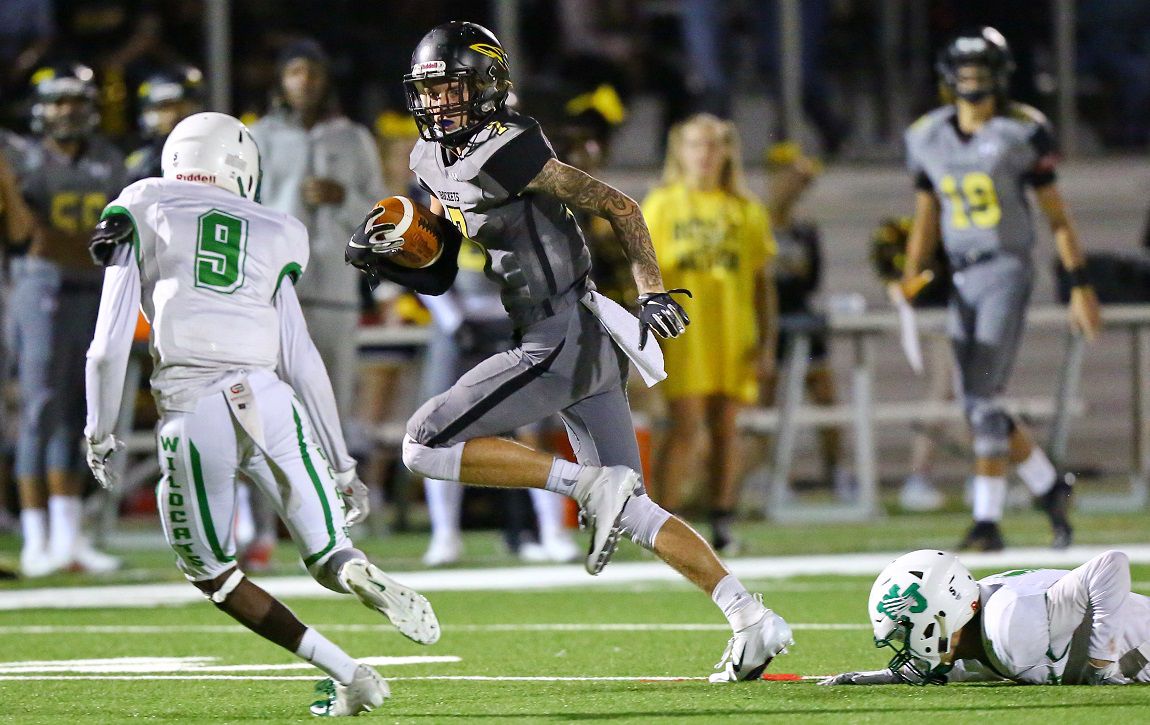 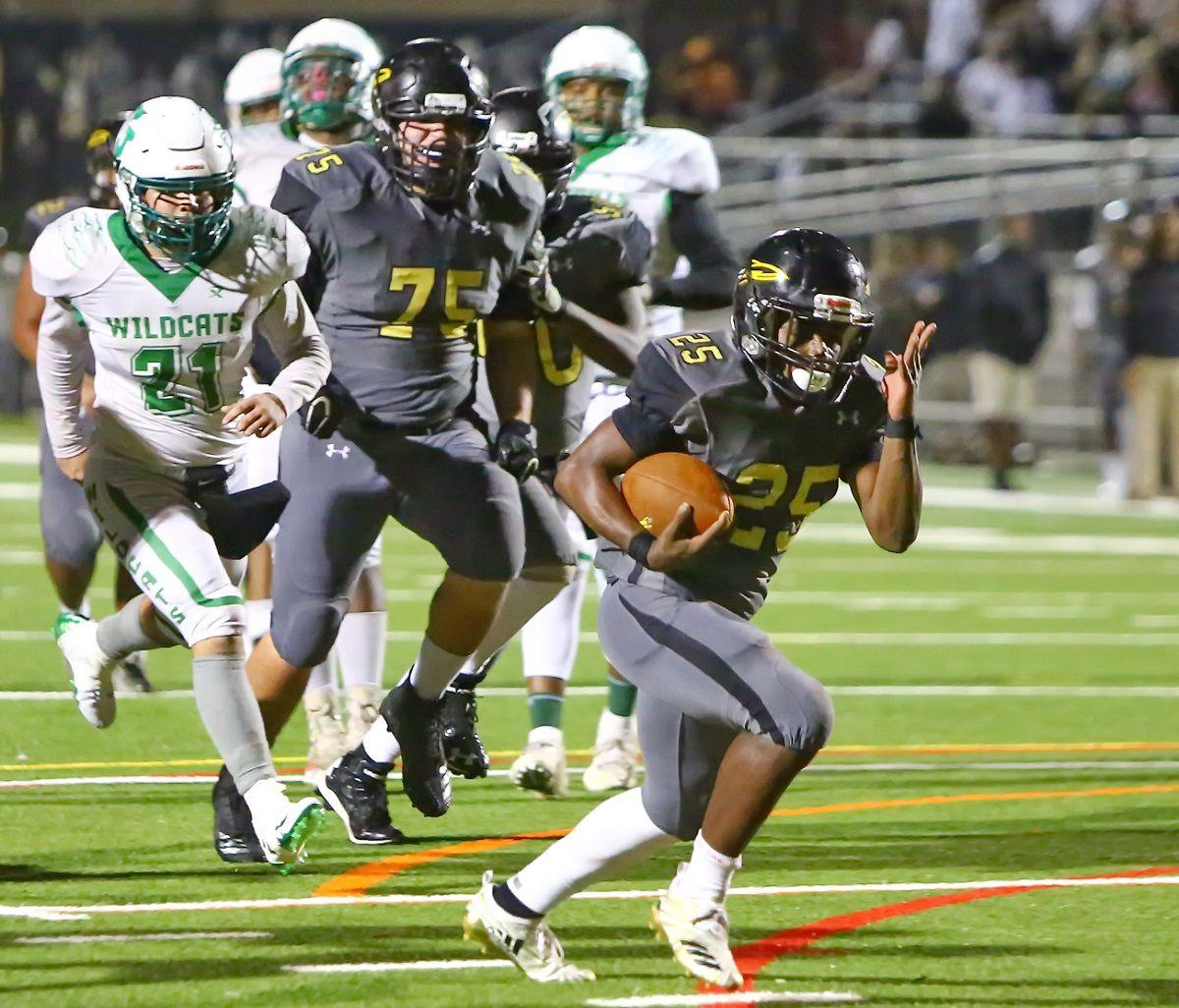 RM’s Nicholas McCarthy (25) slips a number of tackles on his way to the end zone for the Rockets’ final touchdown to go 41-0 and defeat the Walter Johnson Wildcats. PHOTO BY GEORGE P. SMITH 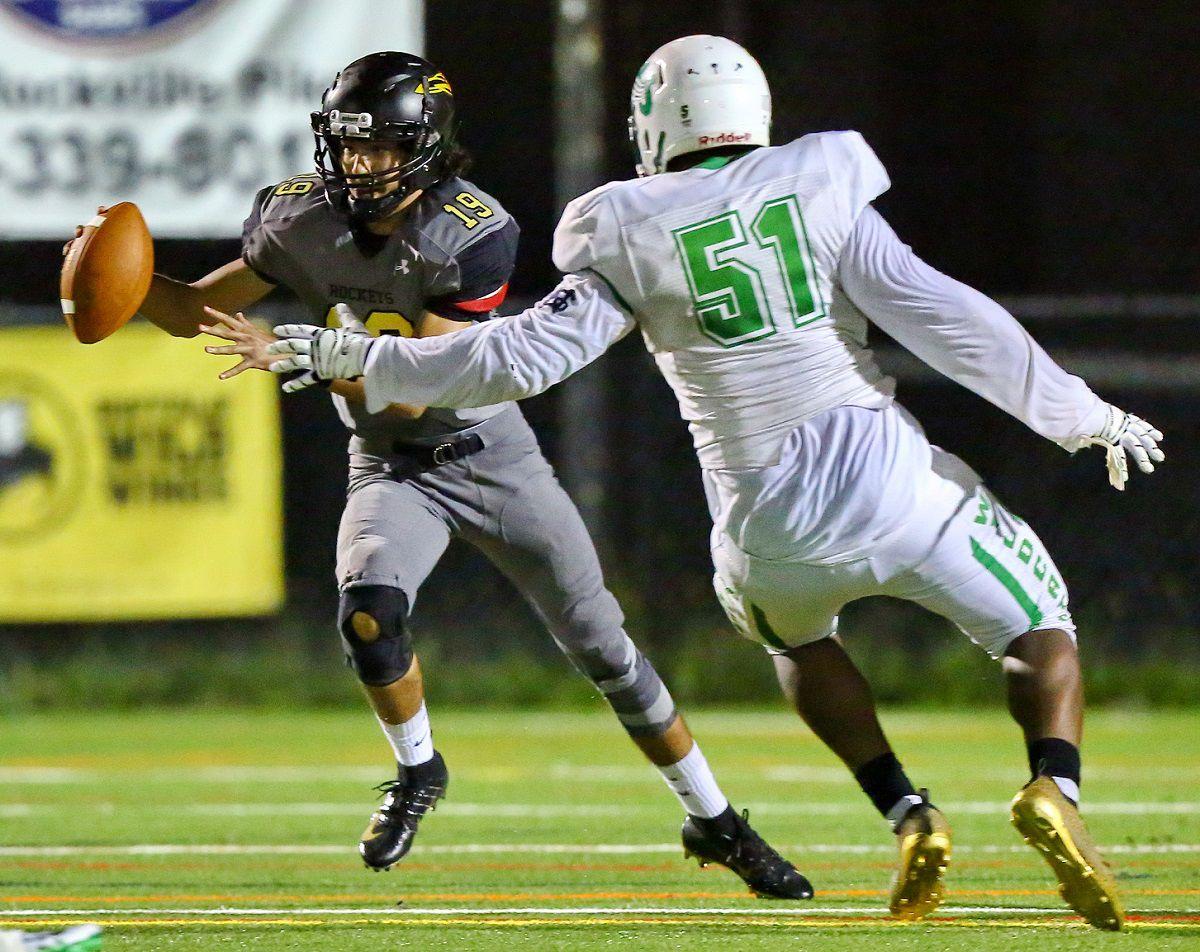 RM’s Nicholas McCarthy (25) slips a number of tackles on his way to the end zone for the Rockets’ final touchdown to go 41-0 and defeat the Walter Johnson Wildcats. PHOTO BY GEORGE P. SMITH

ROCKVILLE — Richard Montgomery Rockets’ junior running back T’Kai Ayoola had only one touchdown on the season coming into Friday’s homecoming varsity football game against the Walter Johnson Wildcats.

He never complained about only scoring once in four games. Instead, he emphatically rectified the situation in a way the Wildcats won’t soon forget.

Ayoola rushed for 257 yards and five touchdowns to help shutout Walter Johnson, 41-0. The junior certainly made it look easy as he earned three of those touchdowns and 196 yards in the first half alone.

“It’s my [offensive] line, they’re great,” said Ayoola of his performance. “And they’re just going to keep improving. Even though we’re a young team, we’re still going to get it done.”

The Rockets had started the season 0-2 and have now won three in a row.

The Wildcats, on the other hand, came into the game with a 3-1 record. However, the Walter Johnson offense that had scored almost 150 points in its first four games of the season failed to get into a rhythm against the stifling Richard Montgomery defense. Rockets defenders hassled quarterback Josh Forburger and forced him to rush to try to make plays. When Forburger did manage to escape and try to complete a pass, the Wildcats receivers were so tightly covered that quite a few passes fell incomplete.

The Walter Johnson defense registered several key plays that unfortunately didn’t translate to the scoreboard. Senior safety Aidan Williams found himself in the perfect position to intercept a ball that popped into the air after a WJ defender collided with a Richard Montgomery receiver. Williams returned the interception 40 yards to set the Wildcats up deep in Rockets territory.

Ayoola began to split carries with fellow running backs Jaime Castro and Nick McCarthy in the second half. McCarthy capped off the night with a 21-yard touchdown to secure a running clock with five minutes left in the game. A taunting penalty on Ayoola’s fifth touchdown on the previous possession caused the Rockets to attempt an unsuccessful two-point conversion and had left Richard Montgomery one point short of a running clock designation.

“They did a really good job on the line of scrimmage and they controlled the line of scrimmage on both sides of the ball,” said Walter Johnson head coach Larry Hurd. “We couldn’t establish any type of running game and had to go directly to a passing game. We’re going to get back and practice as hard as we can and be the best team we can possibly be.”

“It’s hard to get a shutout in football. You never know what’s going to happen,” said Richard Montgomery head coach Josh Klotz. “I was proud of our defense for getting out of some tough spots and the way they fought through it, overcame that adversity and made plays.”

Ayoola, however, said the shutout didn’t come as a surprise to him.

The Rockets will have another opportunity to continue their winning streak next Friday against the Whitman Vikings. Meanwhile, Walter Johnson is set to host the Bethesda-Chevy Chase Barons.