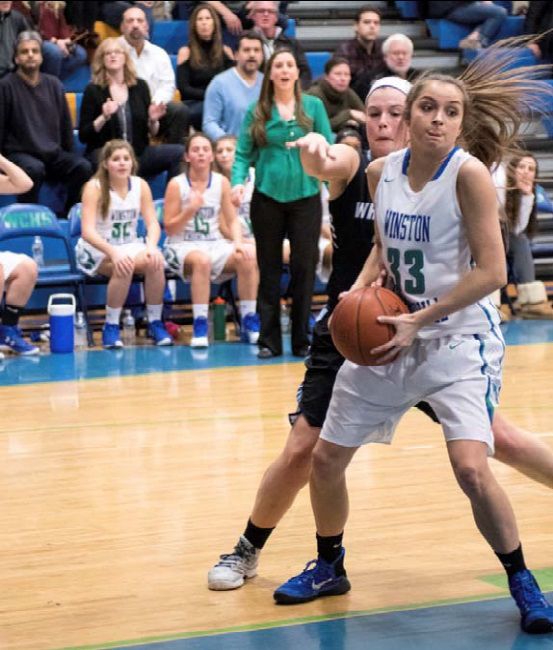 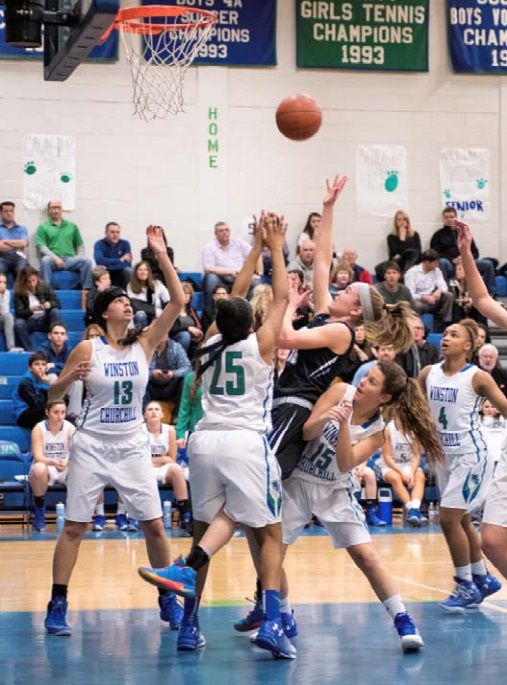 Churchill stayed true to its Bulldog nickname and wouldn’t let the defending state champion Vikings get comfortable with the lead.

Whitman junior Abby Meyers gets swamped by Churchill players while driving the lane and putting up a jumper. PHOTO BY DAVID WOLFE

Both players tried to grab the upper hand for their respective teams by forcing turnovers and driving fearlessly through the paint, occasionally going to the ground to finish a play.

Churchill freshman guard Brittini Martin took aim from behind the arc and let a trey fly through the net to cut Whitman’s lead down to three points.

However, the score stayed close for only a few seconds as Whitman senior guard Isabel Manzano sunk a pair of three-pointers in the first half’s closing minutes.

The Vikings capitalized on their nine-point halftime lead by dictating the tempo in the third quarter.

Meyers dribbled slowly down the court, shouting instructions to her teammates before barreling her way through the Churchill defense and getting fouled in the process.

Fans in the Dawg Pound hollered their attempts to distract the unflappable Meyers as she took her place at the free throw line.

It appeared as though the senior didn’t hear a thing as she shrugged her shoulders and downed both free throws to extend her team’s lead.

The Bulldogs made one last push toward victory by scoring ten unanswered points as the last couple of minutes ticked off the game clock.

Kuchins and senior forward Nina Hazra combined for fifteen points in the fourth quarter. However, Whitman’s lead proved to be too much to overcome.

“They played fantastic and so did we,” said Blanken. “What more can you ask out of a game?”

“We were able to be patient on offense and we slowed down and got good shots,” he said. “We definitely had to match [Churchill’s] energy. I think we could have done a little better on the defensive end.”

The Vikings won’t be able to celebrate their win against Churchill for very long.

Whitman will travel to play Bishop McNamara from Prince George’s County Saturday in a public school vs private school challenge. The game was rescheduled from its previous date due to a snow day.

“We’re going to enjoy this one for a little bit and then we just have to turn it around and reset on McNamara,” said Fitzpatrick.