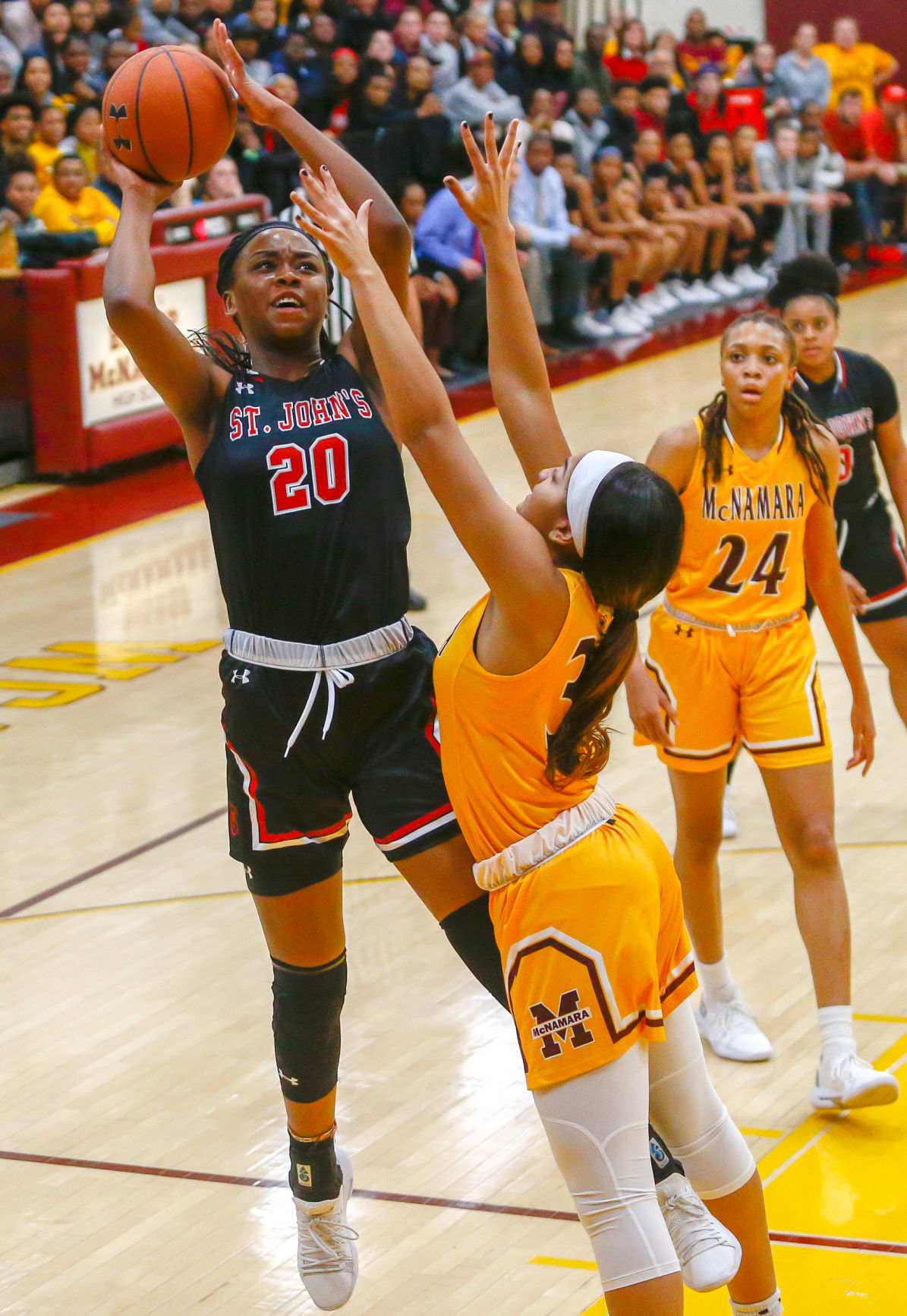 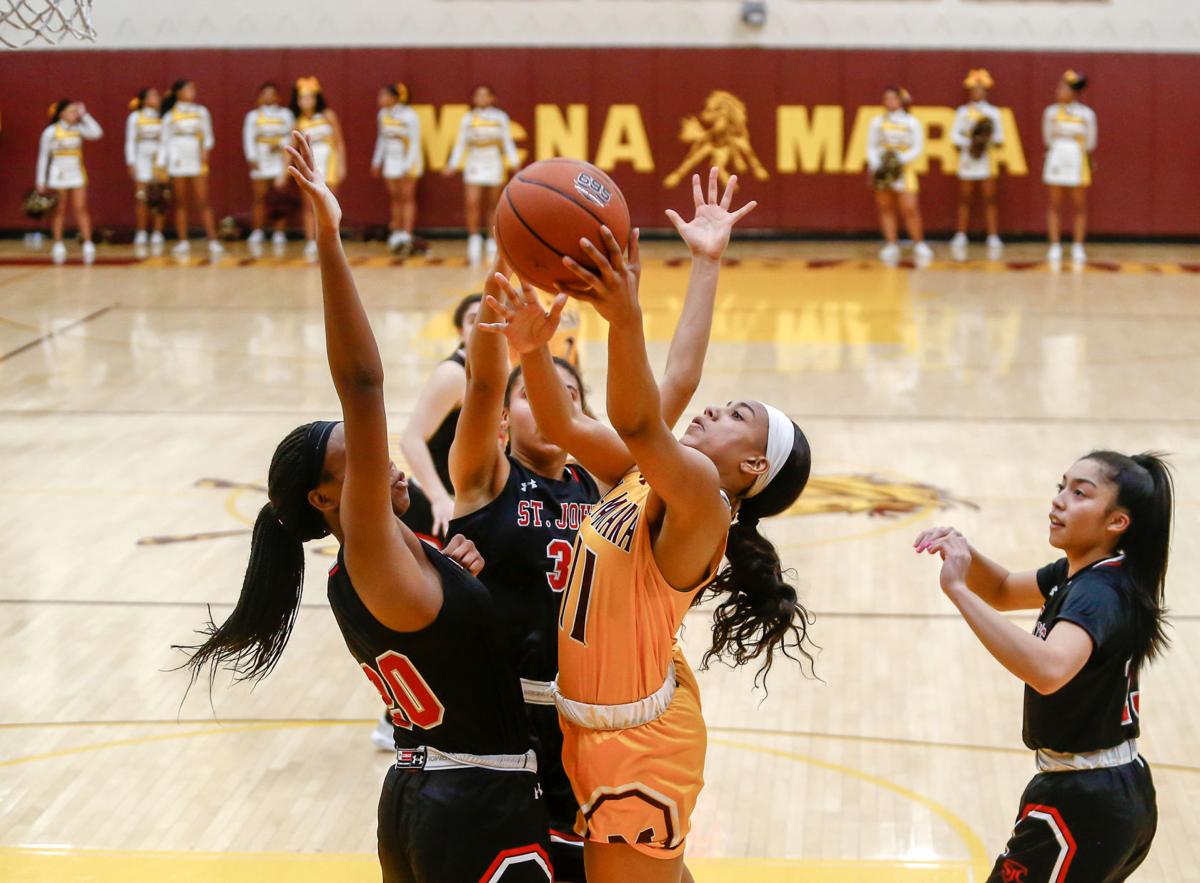 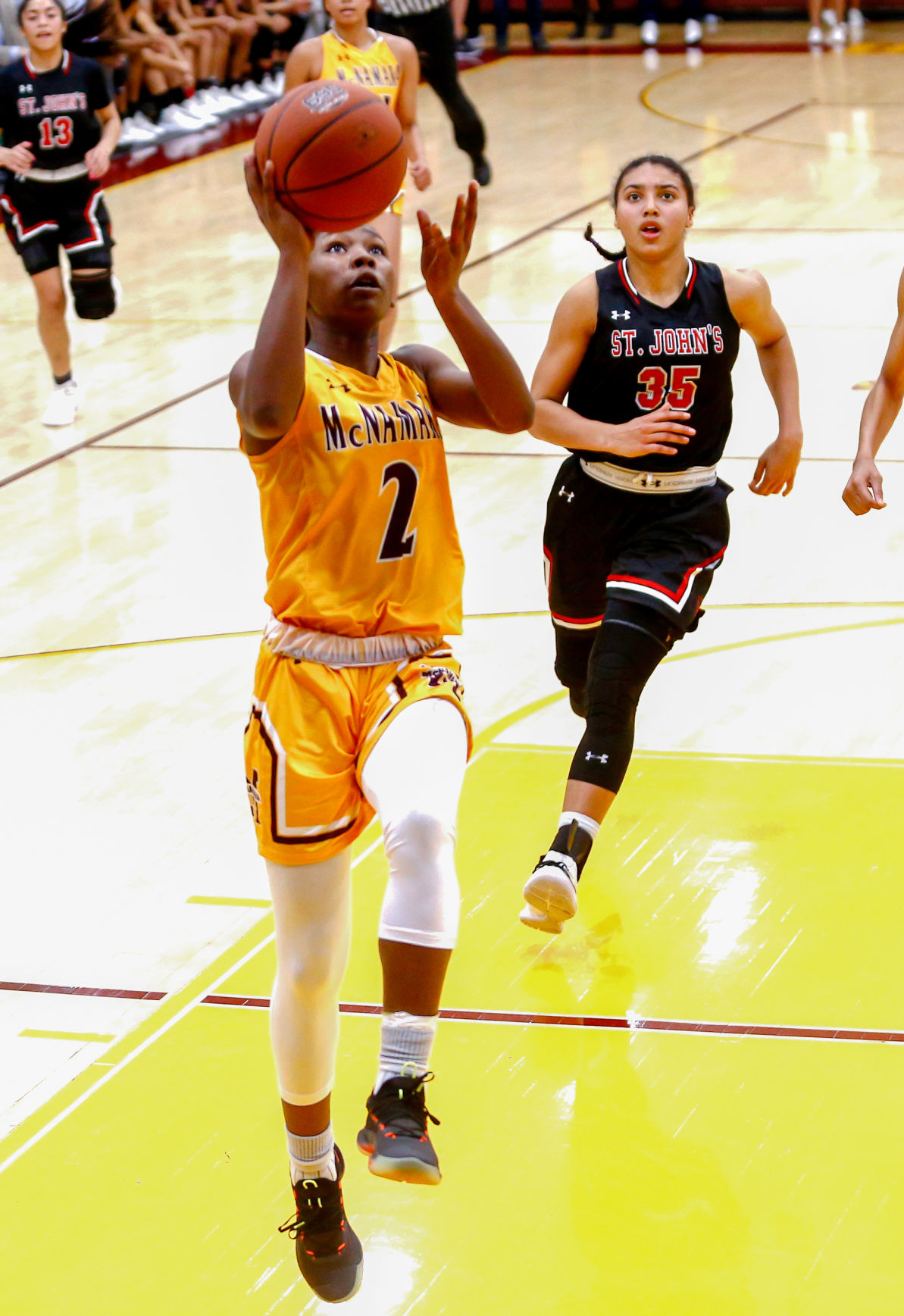 [Missed last week’s game of the week? Check out our photo gallery for more!]

This was the case this season for the No. 3 St. John’s College High School and No. 1 Bishop McNamara High School girls basketball teams. And the highly anticipated showdown between the two powerhouses was nothing short of phenomenal.

The contest was tight as both teams traded baskets, made runs and swapped leads throughout to extend the game into overtime, and the difference in the final four minutes ultimately came down to free-throw shooting and rebounds.

St. John’s center Malu Tshitenge-Mutombo gave her team a tremendous inside presence with 20 points and 20 rebounds, and guard Azzi Fudd found her rhythm late to finish with 18 points and three rebounds to lift the Cadets to the upset away victory in a crammed Bishop McNamara Gymnasium on Jan. 22.

St. John’s (20-1, 10-0 WCAC) has now won 11 straight games since its only loss this season to Miami Country Day on Dec. 20. McNamara senior guard Aliyah Matharu led all scorers with 29 points to go with five rebounds, three assists and five steals.

“This was great for girls basketball, not only for the DMV but for the nation, and I’m really proud of our girls,” said St. John’s Coach Jonathan Scribner after capturing the win. “We could have backed off and let it slip away multiple times but we didn’t. We fought, we made the right plays, came up with big rebounds, hit the free throws when we needed them to come away with the win, and that’s basketball so I’m very happy.”

Scribner underlined his team’s ability to execute in the critical moments of the game and said Tshitenge-Mutombo’s efforts on the boards and at the charity strike was the difference in the game.

“She was an absolute monster,” Scribner said of Tshitenge-Mutombo. “Her free throws, that won the game for us. How she hit free throws was the difference-maker. I’m really, really proud of her. It’s been an area she’s worked really hard on and she was able to get it done tonight.”

The Cadets opened the night with a quick 7-0 lead, before the Mustangs responded with a 10-2 run. From that point, the game was a back-and-forth affair.

St. John’s played a more efficient second quarter and drilled key 3-pointers to take a 29-23 lead at halftime. The shooting, ball movement and rebounding by the Cadets kept them ahead for most of the third.

The Mustangs utilized a full-court press and capitalized on several forced turnovers to reduce their 40-31 deficit to 42-39 heading into the fourth. McNamara opened the final quarter with two quick layups to gain its first lead since the second period.

“They went on a huge run so we had to push through, not let that get to our head,” Tshitenge-Mutombo said of McNamara’s 11-2 scoring run spanning from the end of the third to the start of the fourth quarter. “I thought I did well with my rebounding. I helped get my team second-chance boards; that’s pretty much what helped our team.”

McNamara’s Jakia Brown-Turner connected two crucial field goals out of her final 11 points down the stretch and Matharu stayed in offensive and defensive attack mode for the duration of the last eight minutes of regulation.

In the dying seconds of the game, Fudd’s mid-range pull-up jumper attempt was blocked by Brown-Turner with time expiring to send the match into overtime. Matharu’s 3-pointer at the start of overtime gave McNamara its last lead of the game.

Fudd hit several heroic shots during the extra period while Tshitenge-Mutombo was perfect from the free-throw line while grabbing several offensive rebounds for second-chance scoring opportunities. Once St. John’s had a two-possession lead, the Cadets forced pivotal turnovers and used its 34-24 rebounding advantage in the final minute on their way to clinching the win.

“St. John’s played a heck of a game. You know they knocked down open shots as we thought they would and knew they would,” said Matharu, commending St. John’s timely playmaking ability.

“We played some intense defense, but we could have done better on the defensive end… We didn’t box out as well as we could have, and we let them get rebounds and second-chance opportunities and they knocked down free throws. So that was our weak spot tonight.”

With the loss, the Mustangs fall to 18-1 overall and 7-1 in WCAC play. While upset with the loss, Coach Frank Oliver, Jr. was not dismayed by the result and already set his sights on the rematch on Feb. 9.

“It’s a long season. It’s just one game… so we’ll see them (St. John’s) next time in about a week and a half,” Oliver said. “We just didn’t make shots and we had all the looks in the world, but they just couldn’t fall today.”