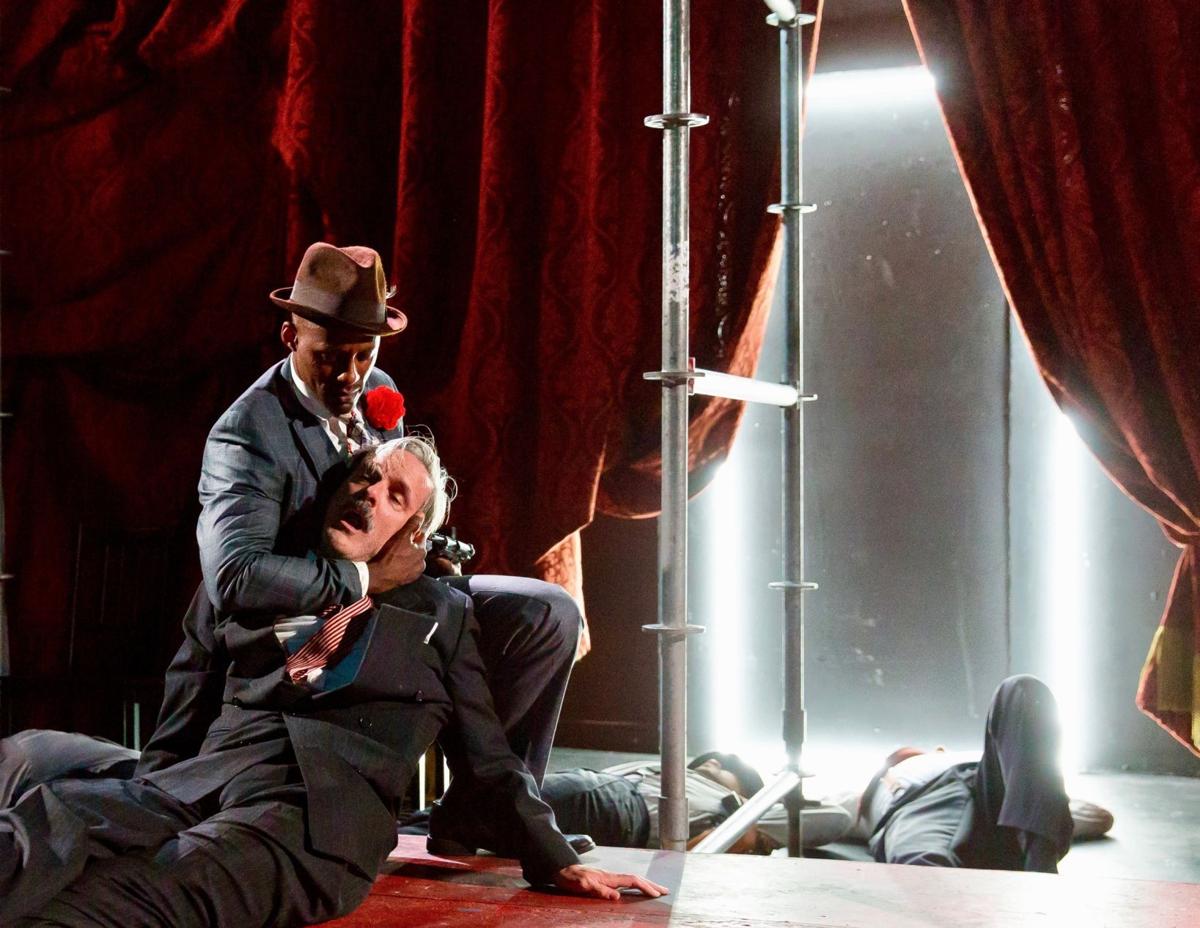 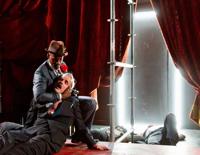 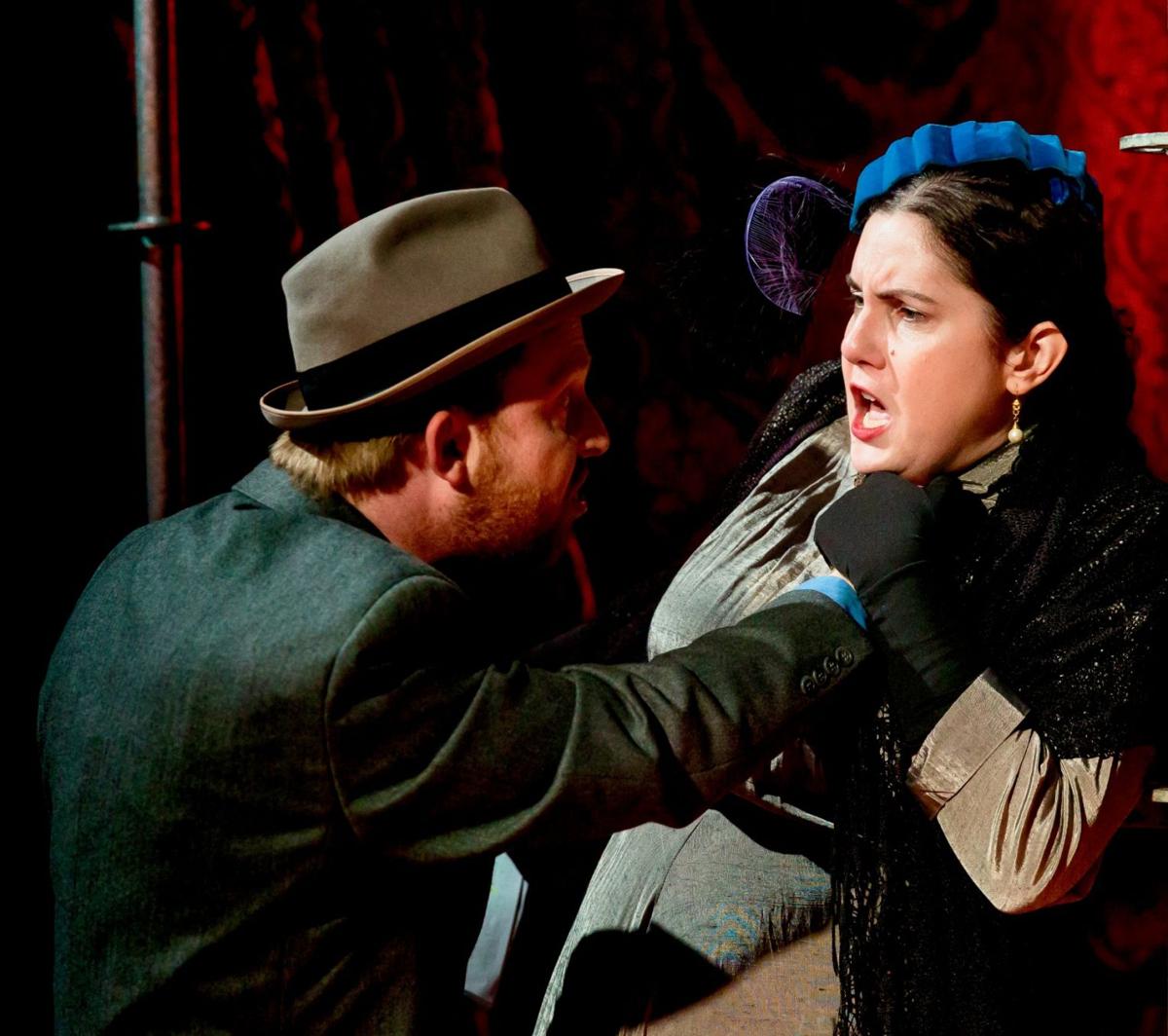 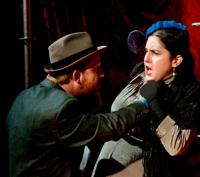 How would a 1930s-era German opposed to Nazism explain German politician and leader of the Nazi Party Adolf Hitler’s rise to power in terms Americans of the time might understand?

The play in which Brecht portrayed Hitler in this manner, “The Resistible Rise of Arturo Ui,” was not, however, performed as he had intended. In 1941, the United States of America was still neutral at the time, resulting in Brecht being unable to get his play staged.

Only after Brecht’s death was the play produced, eventually becoming celebrated as a work reflecting his artistry and politics, the two of which Brecht felt were inseparable. Scena Theatre is now presenting an excellent adaptation of Brecht’s “Arturo Ui” at the District’s historic Atlas Theatre.

As mentioned above, the play is a parable of the rise of Hitler: petty gangster Arturo Ui builds a group of loyal supporters to corner the Chicago cauliflower market. (Cauliflower! Such absurdities are one of the beauties of this play.)

Ui’s next step: take over the neighboring town of Cicero, a reference to Hitler’s annexation of Austria. Americans of today are arguably unlikely to know many of these details and personalities of the Hitler era  even less so references to Givola limping, a nod to Goebbel’s real-life infirmity. During the production, slides are projected periodically in the background explaining events in Germany at the time, illustrating the parallels between the allegorical rise of Arturo Ui and the coming to power of the Nazis.

As part of the humor and artistic technique of the play, Brecht employs parodies of works by Shakespeare and Goethe. American theatergoers will recognize references in lines from “Macbeth,” “Hamlet” and notably “Julies Caesar:”

“Friends, Romans, countrymen, lend me your ears!” The unlettered gangster Arturo Ui strives to become a respected orator for his takeover of the cauliflower market by practicing Mark Antony’s speech from Shakespeare’s “Julius Caesar,” much as Hitler made a study of theatrics to deliver effective speeches. Occasionally, a Shakespearean reference is modified to signal Brecht’s antipathy towards capitalism, as Hamlet’s most famous line (“To be or not to be”) morphs into “To sell or not to sell.” Audience members not well-versed in German literature may little realize that the two couples touring Givola’s Flower Shop form an allusion to the Garden Scene in Goethe’s “Faust,” the seduction scene of Margaret in which one of the characters is the very devil. Robert Sheire, who plays Ui, assured this reviewer during an interview that the show’s knowledgeable and gifted director Robert McNamara had made the cast keenly aware of the various literary traditions Brecht was parodying.

Sheire, in fact, plays Ui splendidly, metastasizing from a whining, resentful small-time hoodlum to a confident and manipulative dictator. Lee Ordeman is also very effective, playing Ernesto Roma like a mobster who walked straight out of a 1930s Edward G. Robinson gangster movie.

His role becomes more Shakespearean when, after Roma’s murder, the former henchman comes back to haunt Arturo Ui – an allusion to Banquo’s ghost returning from beyond the grave to terrorize the conscience of Macbeth.  David Johnson and Gori Olufon as Manuelle Giri and Giuseppe Givola respectively also effectively channel vintage gangster movie tropes, essential for the play to work as Brecht explains the rise of Hitler via American popular culture.

Anne Nottage is similarly excellent as Betty Dullfeet, in a role as a horrified widow who must consent to work with the loathsome Ui – as many non-Nazis felt forced to collaborate with Hitler.

The 1930s atmospherics of the production is lovely. Before the play begins, loudspeakers play 1930s popular recordings, including “Stardust,” “Puttin’ on the Ritz” and “The Dipsy Doodle.”

Washington’s revived vintage streetcars, popular in the thirties, can transport you to the Atlas Theatre which opened in 1938 as an Art Deco-styled cinema…all very nostalgic, until we realize 1938 is the year of Hitler’s annexation of Austria and the Kristallnacht, the latter being the “Night of Broken Glass” when Hitler’s thugs terrorized Jews by smashing the windows of their homes, businesses and synagogues.

“The Resistible Rise of Arturo Ui” serves as a reminder not to see the 30s era in terms of sentimental nostalgia, but as a Brechtian cautionary reminder that the monster of fascism can appear at any time.

The single fault with this production is that some of the projections explaining events during Hitler’s rise to power are not easily visible from some of the seats, as scaffolding (part of the minimalist props) obscures the view.

As there is open seating, viewers are advised to arrive early to secure an unobstructed view. This quibble aside, “Arturo Ui” is an outstanding production, with superb acting and excellent staging; this reviewer recommends it highly.