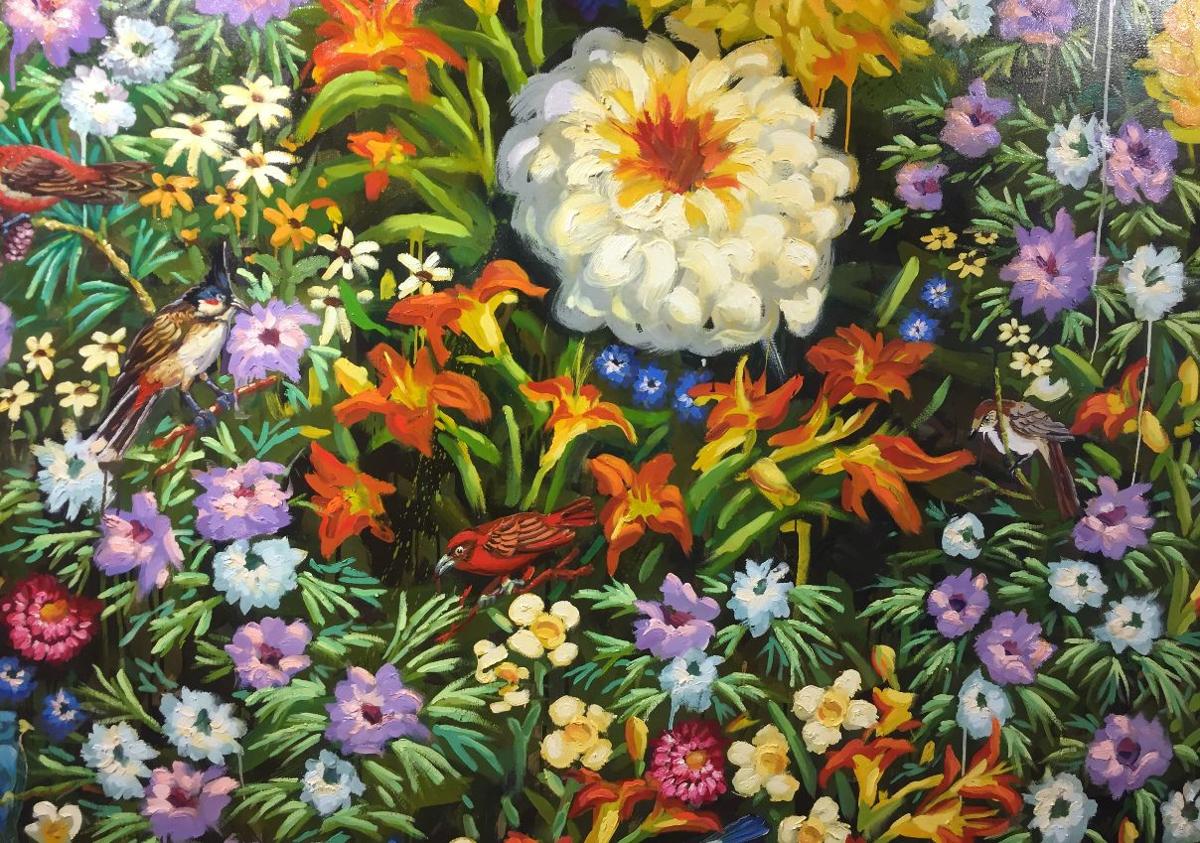 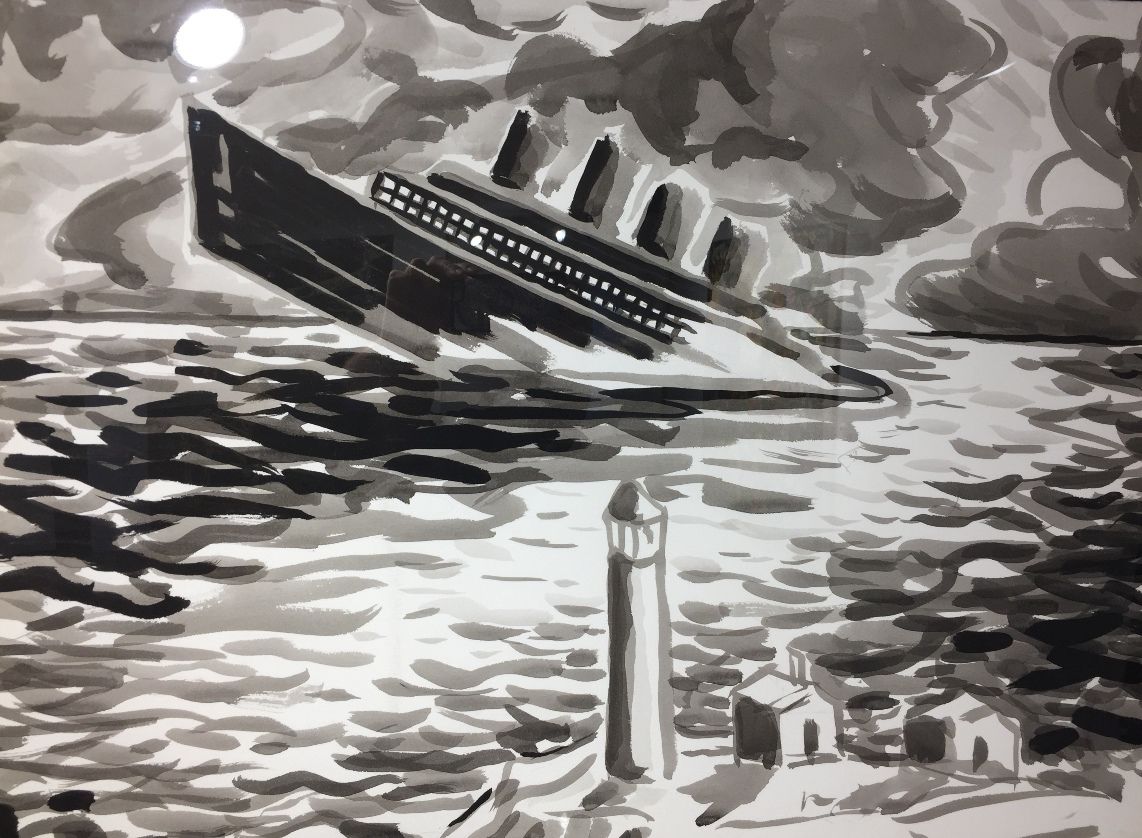 Those interested in the visual arts, and in paintings, might be interested to learn about an exhibit a stone’s throw from Prince George’s County. Currently, paper and canvas works by Stephen Lewis are on display at the Salve Regina Gallery at Catholic University. The works on paper are mixed media, mainly comprised of Sumi ink and ink washes. Those on canvas are oil paintings.

Lewis is an interesting artist as his paintings are in markedly different styles. John Figura, professor of Art at Catholic University’s Rome School of Music, Drama and Art, calls Lewis “a true ‘Painters’ painter,’” and admires the “aggressive, powerful and sometimes confrontational imagery of his work.”

When one thinks of ink and watercolors, there is a tendency to envision works of placid and glowing styles. Not so for Lewis, as his paintings on paper are painted predominantly with a black brush, and his subject matter is on a sinister side. It is now mid-autumn, and the spirit of Halloween is in the air. Thus, one painting of a sinister cloaked figure making his way through “the boundary of the dark, horrible, lofty forest” seemed to suggest for us Edgar Allan Poe’s “Silence – A Fable,” whence these lines.

The painting is about spirituality, as Lewis explained: “The image is modeled on a plaster figurine of a saint or possibly, Jesus himself that I found in the trash outside my studio in Brooklyn. There was something more meaningful and intriguing about the figure because it was so damaged; it was if the injuries it sustained made it less banal than a dashboard Jesus-type figurine it was designed to be. There was a kind of like-life mystery and meaning associated with its disfiguration.”

Another painting on paper with inks that caught our eye was the iconic image of the Titanic capsizing. The ill-fated ocean liner sank on her maiden voyage in 1912 “in a solitude of the sea, deep from human vanity,” as poet Thomas Hardy phrased it.

Yet this painting has a disturbing feature in the foreground: there is a lighthouse, and the ship is not far from shore. This vision suggests that even when help is near, it is unreachable and spiritually distant.

A further monochromatic ink-on-paper work, which was eye-catching, involved a bird who was “worm-catching.” Poet Emily Dickinson once wrote:

He bit an Angle Worm in halves

And ate the fellow, raw.”

These simple lines describe the matter-of-factness of Lewis’ bird with a worm in his mouth, just before the worm is halved and devoured. On the one hand, this well-executed painting is about the cruelty of nature. On the other hand, with peaceful flowers on either side of the bird and worm, the painting is simply about the cycle of life, which is nature.

“I feel as an artist, I provide a lot of visual information in the narrative pieces I make, and it is up for the viewer’s experience of them to give the pieces meaning by completing the circle, as it were,” Lewis said.

Lewis again elaborated: “I feel narrative observations about the world” – his “stories” on the paper medium – “tend to be darker, as they reflect of society in all its constructs and failures and how this weighs upon the individual. On the other hand, observations on the natural world seem much more ‘spiritual’ as they attempt to capture some ‘essence’ of the thing observed, which is often elusive.”

The Lewis oil paintings are mostly “plein air,” or scenes of nature painted out of doors. One had an almost calm classicism, whereas the other suggested Impressionism. Lewis elaborated: “These were painted in my yard in the Hudson River Valley. The first image is of my house seen from the bottom of a hill; the second image is of an abandoned road. Of course, there are metaphors associated with the idea of roads or paths and the idea of what constitutes ‘home.’” Yet these locations, as well as the calmer techniques, remind one of the Hudson River School of American painting.

The most complex and arguably the largest oil painting in the exhibition Lewis calls “Mandala.” It was at this moment where the artist pulls out all stops, in his richly-colored view of a bird suggestive of a cardinal (coincidentally, but appropriately, the symbol of Catholic University), bird-of-paradise flowers, “a big flower” (Lewis’ description) and other beautiful floral elements too numerous to mention.

Lewis referred in our discussion of his work to one of his paintings as “‘night in the garden of good and evil,’ where one is tempted through weakness to dismiss both meaning and a path in life fraught with difficulties to settle for something easier.” This description indeed applies to his paintings and this worthwhile exhibition as a whole!

The exhibition of Stephen Lewis’ ink and oil paintings closes on Nov. 1.