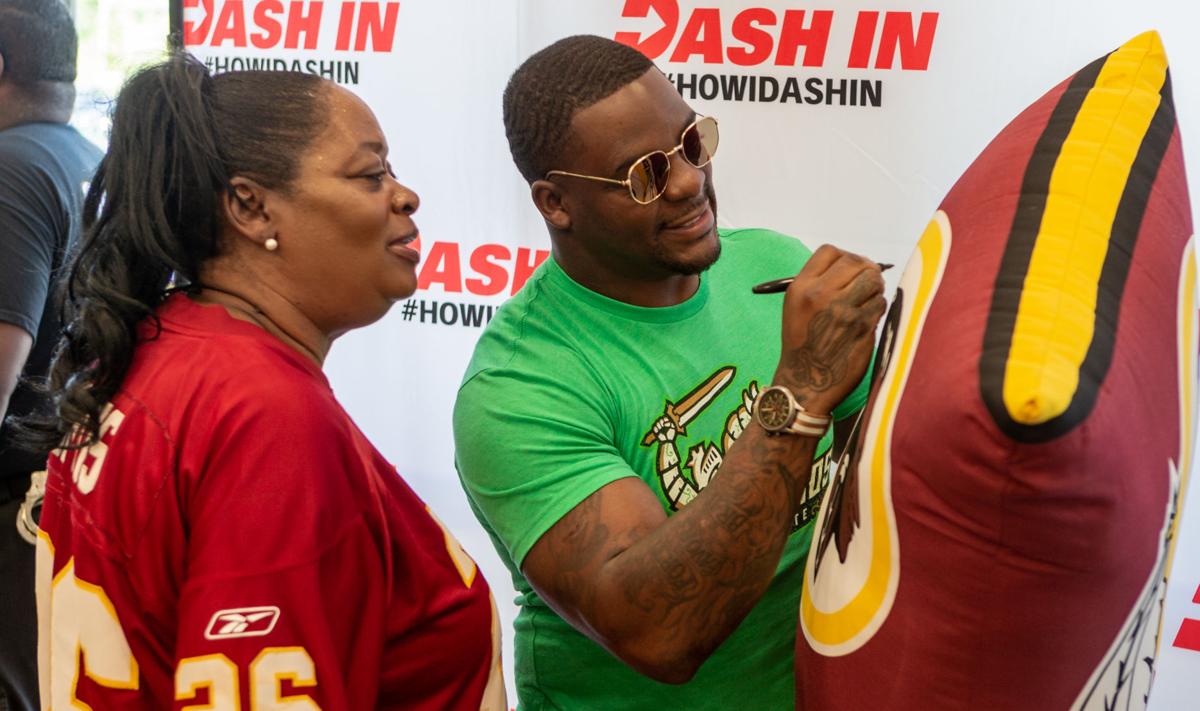 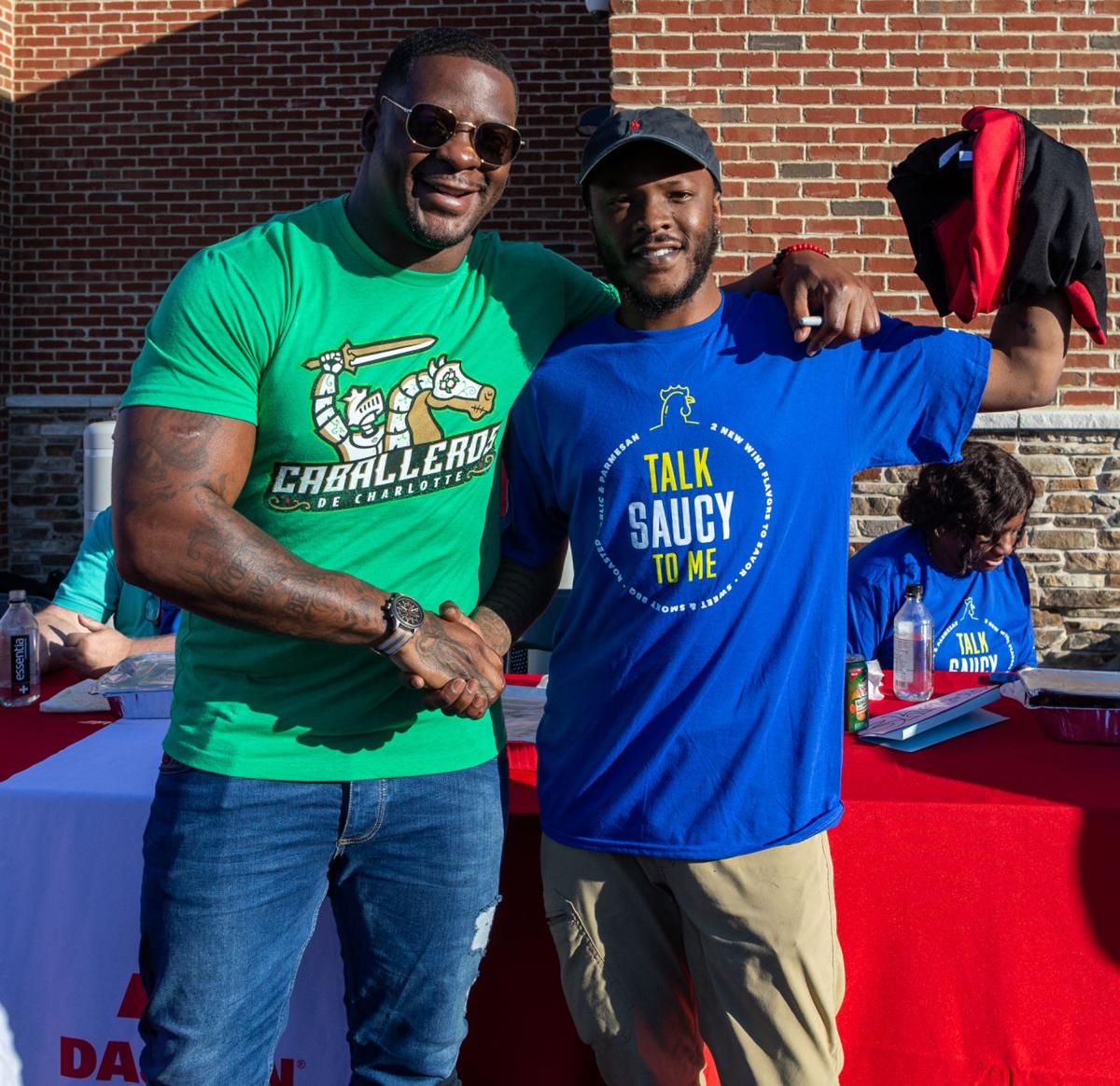 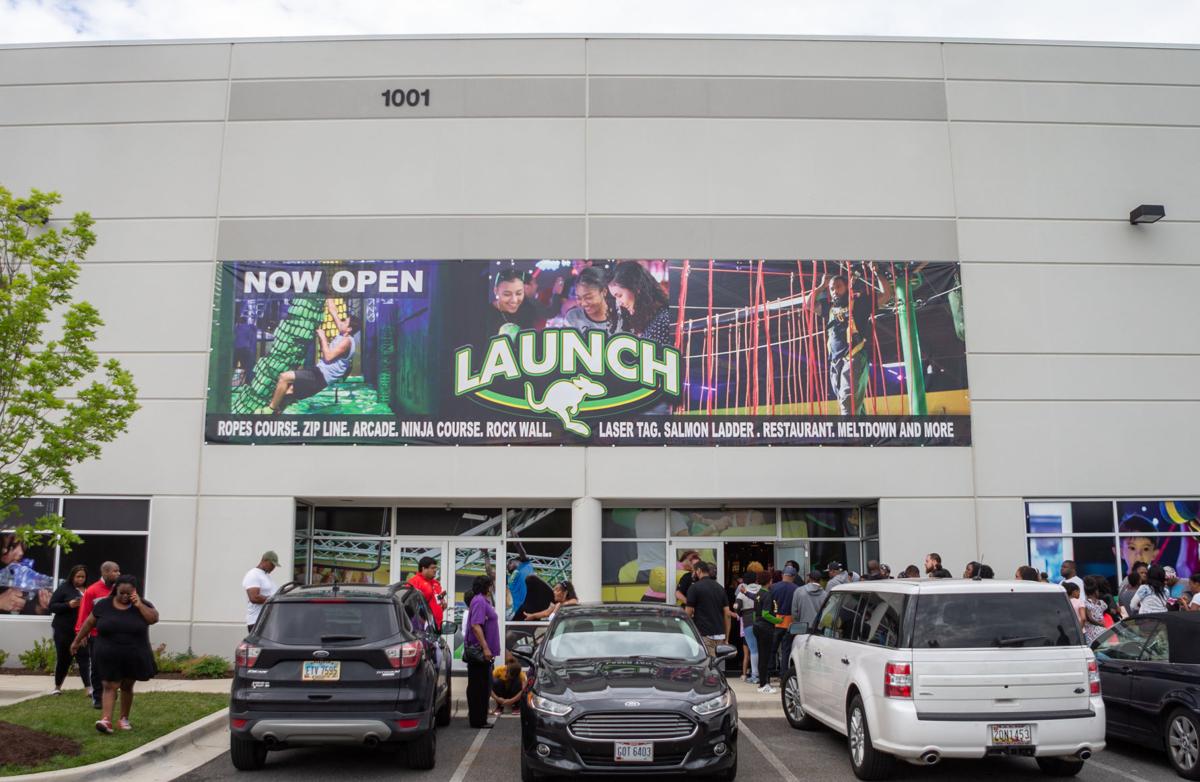 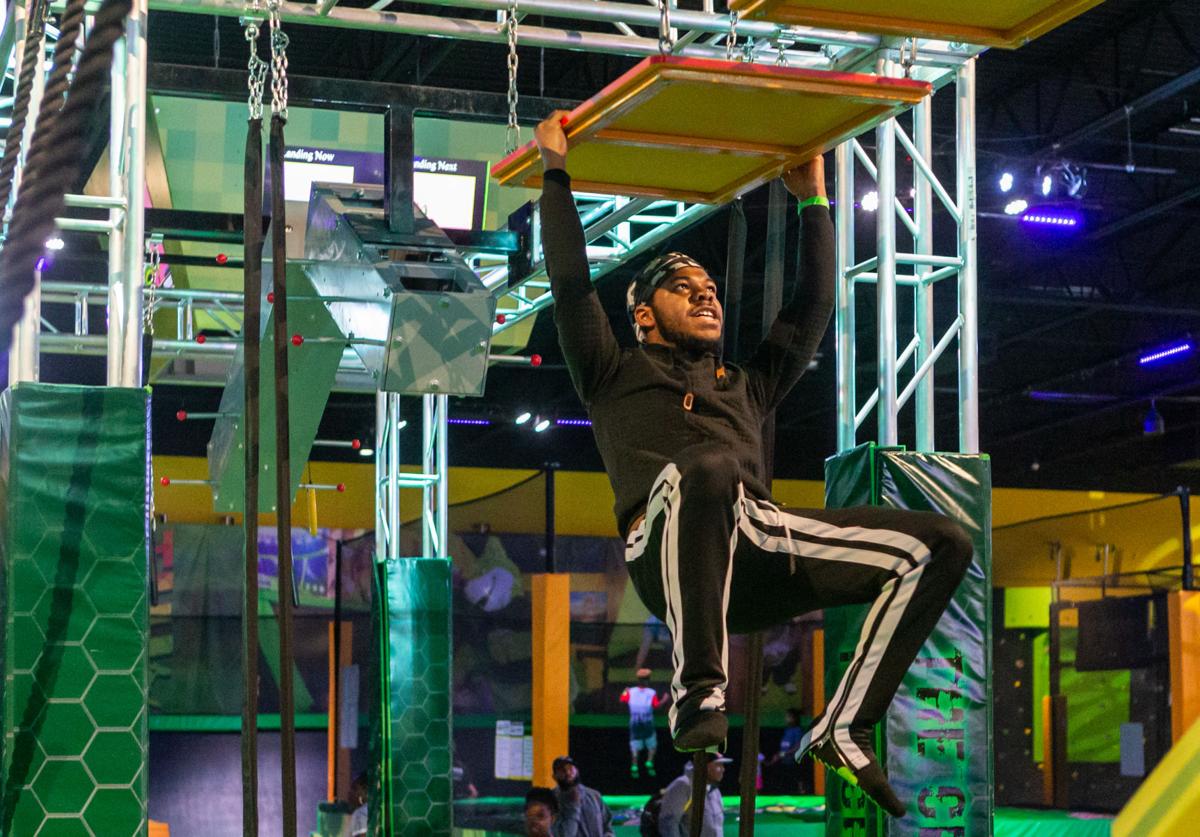 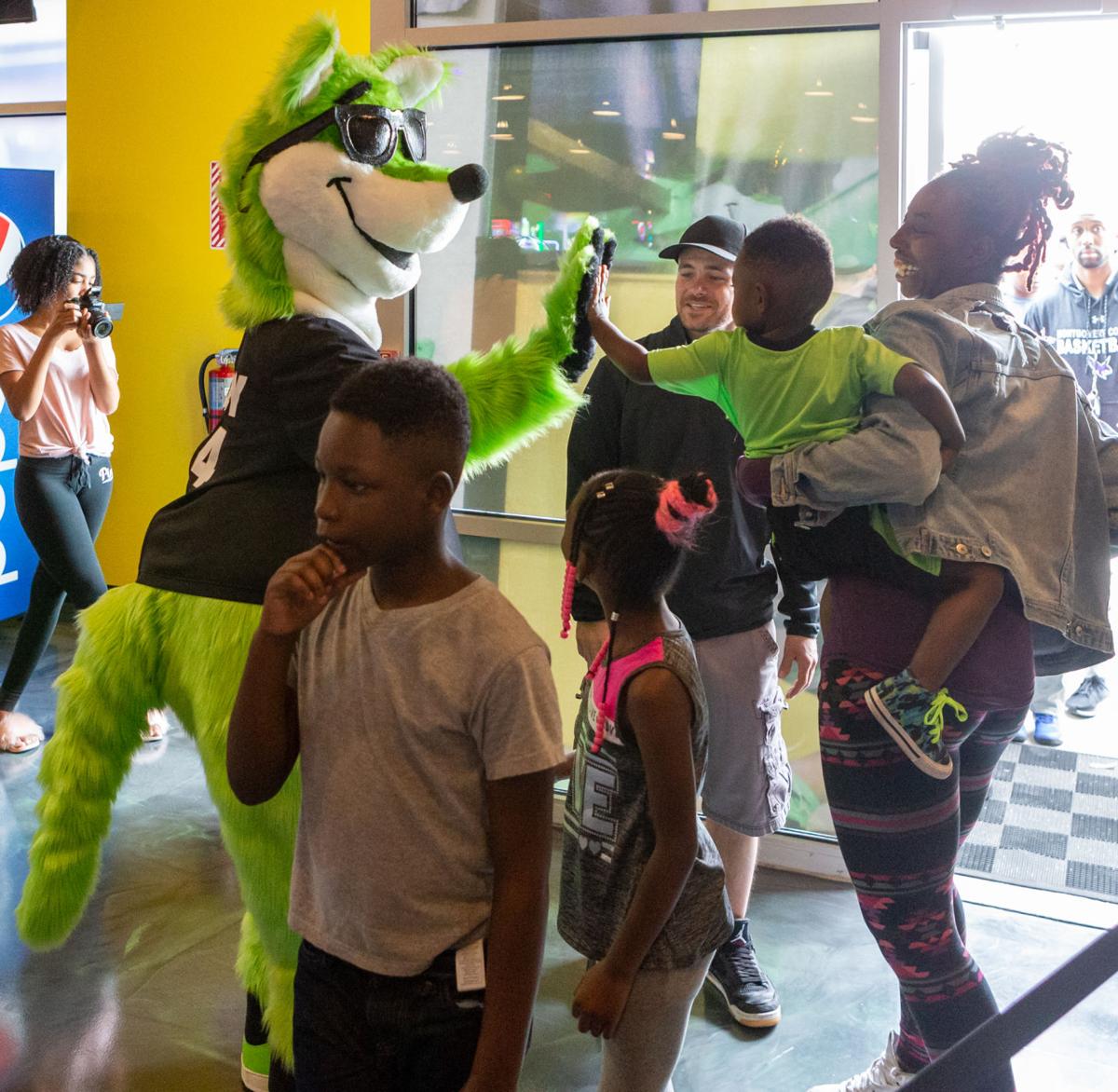 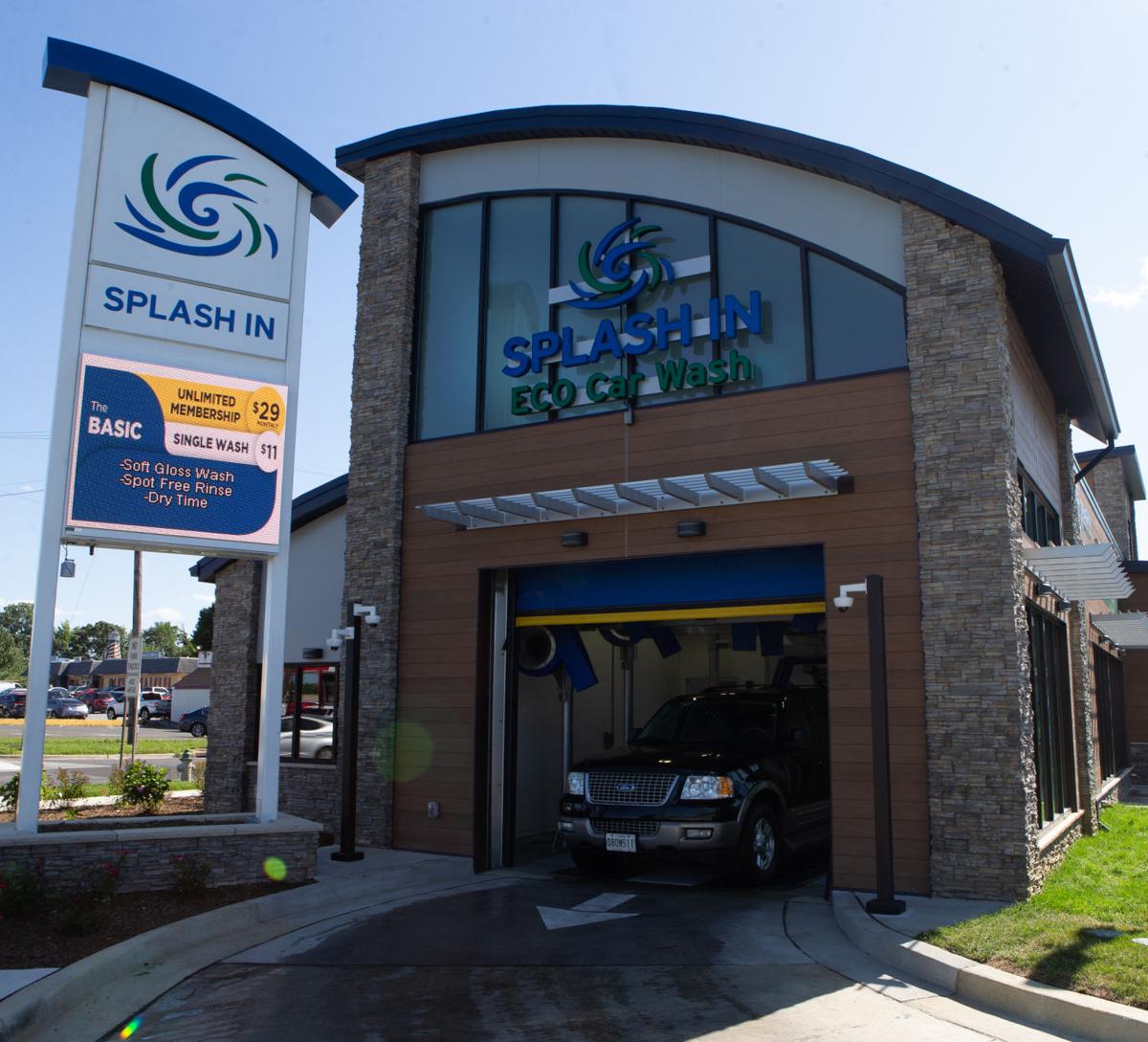 June 14, 2019: An SUV exits the Splash In car wash during the grand opening of the Dash In/Splash In village concept store on Old Branch Ave. in Clinton , MD. Photo by Michael R. Smith/The Prince George’s Sentinel.

June 14, 2019: An SUV exits the Splash In car wash during the grand opening of the Dash In/Splash In village concept store on Old Branch Ave. in Clinton , MD. Photo by Michael R. Smith/The Prince George’s Sentinel.

UPPER MARLBORO – Two former professional football players used their star power to drive up interest in the grand openings of two new businesses in Prince George’s County on June 14 and 15.

Former Washington Redskins running back Clinton Portis and three-time Super Bowl champion Ty Law entered their names into the growing economic development in the county with two business ventures that plan to serve residences of all kinds.

First, Portis started his partnership with Dash In, a Wills Group company, with the grand opening of their all-new village concept store and gas station on June 14.

Dash In opened their third location in Clinton by introducing a 3,500 square-foot store location, located on Old Branch Avenue in Clinton, that offers several food options not seen in other locations, Director of Brand Marketing Darleen Nascimento said. They offer a  variety of sandwiches and salads with ingredients that are locally resourced.

The village location also features the first-ever Splash In Unlimited Car Wash Club right next door to the station. Customers can sign up for membership and wash their car every day using the all-new 85-foot tunnel car wash that built specifically for the Clinton location.

“This is our backyard,” Nascimento said. “We believe in investing in our backyard and it would be disingenuous for us to skip over the counties we operate and say we care if we are not willing to operate within them…there is a great working-class customer here that works well for us, so it is a perfect fit.”

It is not the first time that the gas station chain has partnered with a Washington Redskins player as they have worked with former tight end Chris Cooley on their Virginia locations. However, the tie-in with Portis opening the new concept location in Clinton was too much to pass up, Nascimento said.

Stanley Gales, 65, a Clinton resident for 26 years, said he is happy that the area, which used to have an under-utilized strip mall, was now fully developed into something that the people of Clinton can use. Gales also said that the gas station would provide another option for drivers to find affordable gas.

“This is slowly becoming a good area,” Gales said. “You do not have to go far to get anything you need, and you are five minutes from the beltway… Maryland is a great place to live, and I love it out here.”

During the grand opening, residents got to meet the former Redskins star while trying out free samples of quesadillas and chicken wings. Others took advantage of a free car wash offer that Dash In was offering for two hours.

“The fan support, especially in this area is phenomenal and to have this much traffic come through, I thought it was great,” Portis said. “The opportunity to play here and have this fan base is great and for your name to still have recognition even though I have been out of football for 10 years. So, to see, I still have facial recognition and have people excited to see you and come out, and support is outstanding, and that is what you want in a business.”

Nascimento and Store Manager Daunita Douglas said the company has already started developing partnerships with the area’s local schools to ensure students are being fed before going to class. They plan to continue these partnerships plus engage the local Clinton community moving forward.

“This is more upscale, and a different feel than people in this side of the county are used to,” Douglas said. “But we bring a family atmosphere here, and we want people to feel that when they come to see us.”

The NFL Players Union has encouraged current players to get into other avenues outside of football to be prepared for the end of their careers. On June 11, the NFLPA rolled out an initative asking players to define themselves called the #AthleteAnd campaign which included a workshop where players were taught on how to grow into professionals.

“We encourage all of the players to think of themselves as more than just football players,” said NFLPA Senior Player Manager of Player Affairs Dior Ginyard in a press release. “That could be career-focused – maybe they’re an athlete and a photographer; it could be business-focused – an athlete and an entrepreneur or an investor; or perhaps it’s around education – an athlete and a graduate. Our goal is to really help the guys build confidence to figure out what their ‘and’ is.”

Since retiring following the 2009 season, former cornerback Ty Law co-founded a business venture called Launch, a year-round, family entertainment and trampoline action park. The venue attempts to cater to kids and adults with trampoline games, dodgeball, rock climbing and laser tag. Since it began in 2012, the business has grown to 29 locations in 13 states.

“It’s no secret that indoor trampoline parks have become a significant contender in the family entertainment industry, but we’re more than just a trampoline park,” Law said. “With a variety of activities available, we’re bringing new things to make it interesting for people, offering plenty to do for first timers and enough variety to keep the thrill going for returning guests.”

After opening three locations in the Metropolitan region, Launch opened its first location in the county on Hampton Boulevard in Upper Marlboro on June 15.

The grand opening did not start off smoothly as line control problems and promotional advertising problems caused several families to be upset. However, once the issues were fixed and people entered the venue, children and adults of all ages had fun bouncing on the trampolines and the three-floor laser tag course.

Elijah Lee, 19, said the obstacle course on one of the trampolines was harder than it seemed, reminding him of the American Ninja Warrior Courses on television. Even though it is catered for families, Lee said, the distance to drive compared to other entertainment options like Six Flags America is a strong plus for Launch together with the various options of things to do inside.

“I will most definitely be back,” Lee said. “This is really close to my house, and it is a nice facility.”

While Law was unable to appear for the grand opening and ribbon cutting ceremony, General Construction Manager Demo Roberts said he has visited the site multiple times and video-called him before the opening.

“Ty is very involved and was here for our soft opening,” Roberts said. “But he was involved with his location as we keep getting bigger and bigger. We keep adding more attractions, and the finishes look good even to the smallest detail.”

After the grand opening, it will be important to establish relationships with the area schools as Launch has with their other locations. One of the programs they have is a free day for honor roll students as well as a “lights on” day for children with disabilities.