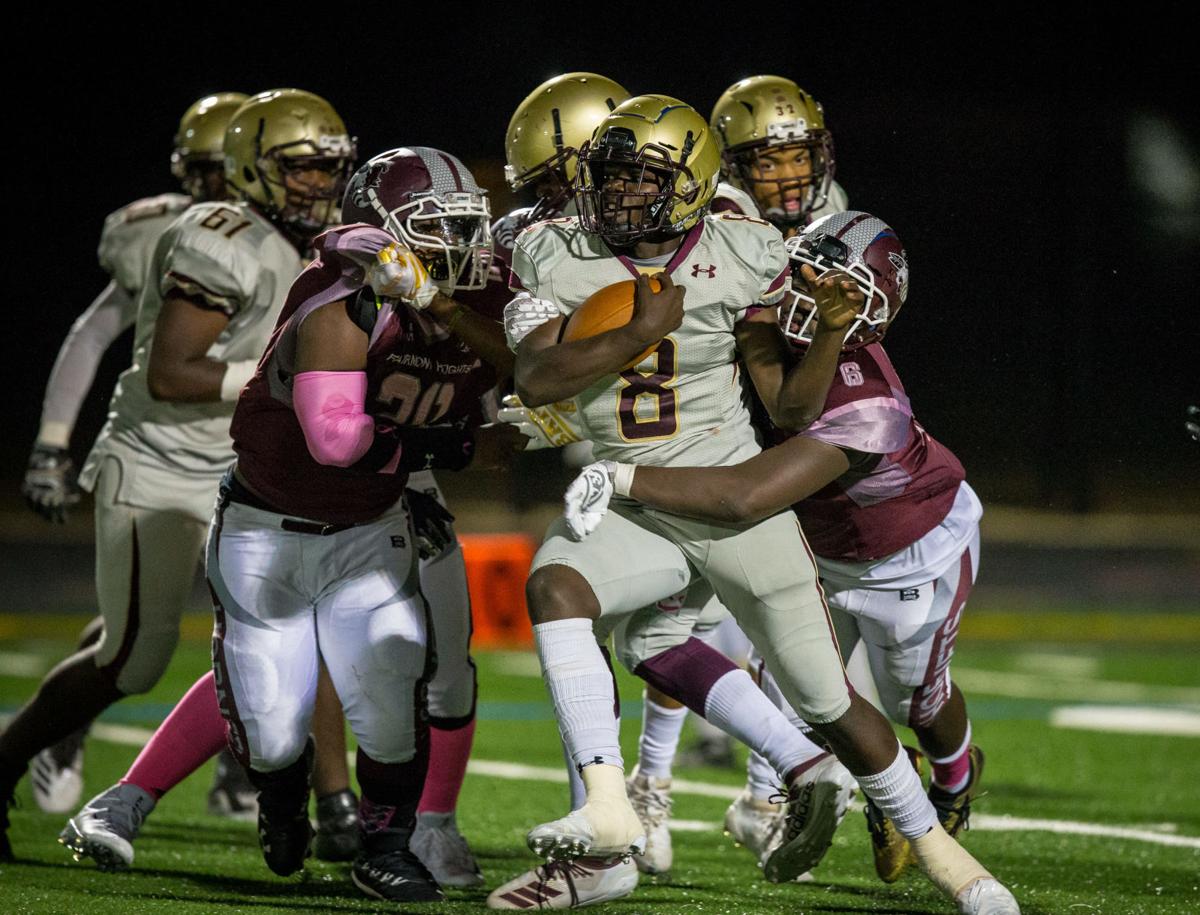 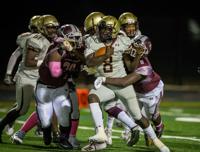 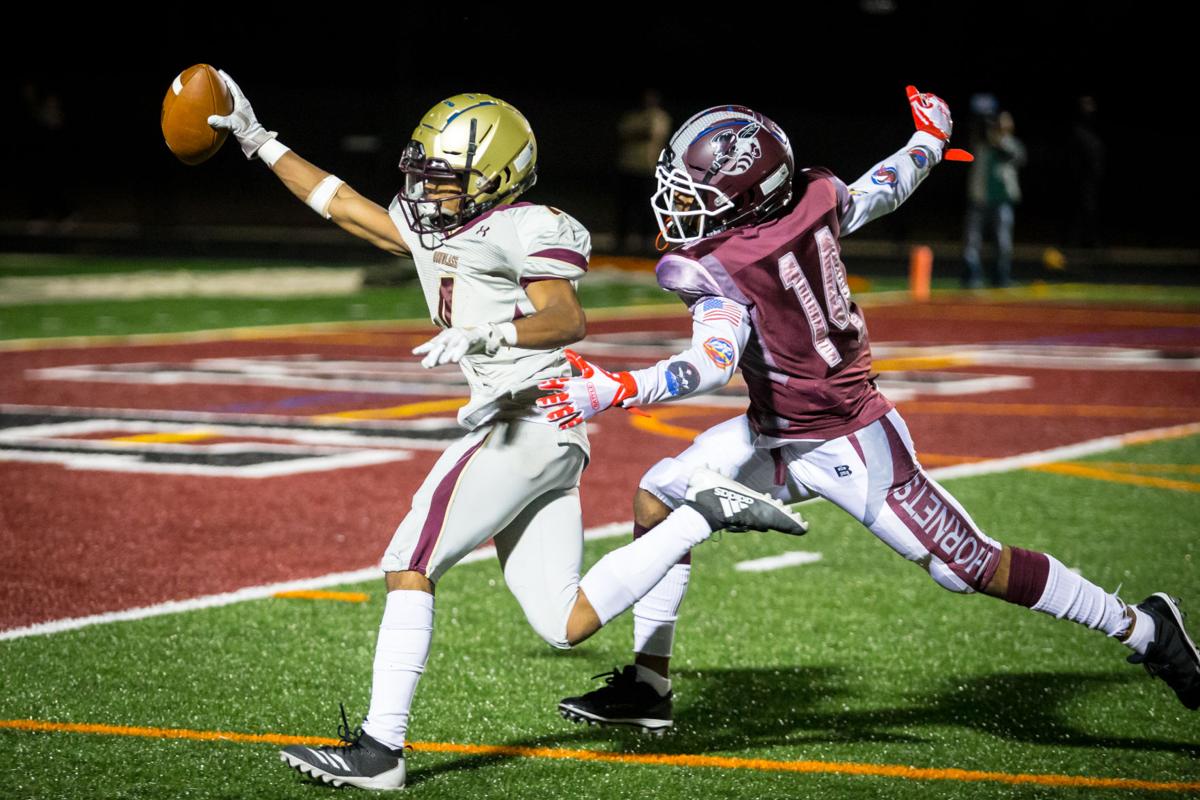 LANDOVER – The Fairmont Heights High School football team entered a highly anticipated matchup against Frederick Douglass High School with hopes of not only celebrating its Homecoming with a victory but getting revenge from last year’s 1A south regional final in the state playoffs that resulted in a close 20-12 loss.

However, because of Douglass’ proficiency with managing the clock and ability to make vital plays in crucial moments, the Eagles were able to hold off the Hornets once again, 26-20, in a competitive showdown on Oct. 11.

Quarterback Devin Harding was 4 of 10 for 71 yards and a passing touchdown, in addition to recording 12 carries for 85 yards and a rushing touchdown to lift the Eagles (6-0) to the close win. Running back Zavier Price tallied 26 yards for two touchdowns on six carries, including the game-winning 2-yard rushing touchdown, to help Douglass improve to 6-0 on the season.

“Fairmont is a great club; you know they do a real good job. They had a lot of energy and they’re tough kids, so we knew it was going to be a battle,” said Douglass Head Coach Julius Pinkney. “We knew Fairmont was a team that could beat us if we weren’t on our game.”

All evening, both teams went back and forth, trading touchdown-for-touchdown until late in the fourth quarter. The Eagles began with a 6-0 lead at the end of the first quarter after they worked their way down the field on the opening drive that ended with a Price 1-yard touchdown run with 5:44 remaining.

Fairmont Heights (4-2) answered back with a touchdown by running Jamal Lone to tie the game early in the second quarter.

The Hornets and the Eagles matched scoring plays again moments before halftime. Harding tossed a 41-yard pass to receiver Malik Pettaway with 3:42 left to give Douglass the 12-6 lead. However, on the following drive, Fairmont Heights’ Jaron Fernandors took a handoff at the Hornets’ 33-yard line, made two cuts and broke free for an exhilarating 67-yard run into the end zone to tie the game heading into the half.

After opening the third quarter with a huge play on a 25-yard pass to Doween Simpson for a first down, quarterback Robert Bell threw a costly interception to Qua’lyn Maith to put the Eagles in scoring position. Douglass quickly marched down the field for another score, this time on an 8-yard run by Harding as the Eagles led 18-12 entering the fourth quarter.

Fairmont Heights utilized Fernandors and Lone to rush the ball possession after possession in pursuit of a game-changing touchdown. After advancing right beyond the red zone on a Douglass penalty, Bell threw a pivotal 22-yard pass to Fernandors, who was taken down right outside the goal line at the 1.

George Adjei followed up with a 2-yard rushing touchdown and Lone scored on the two-point conversion to give the Hornets their first lead of the evening, 20-18, late in the fourth.

Harding had rushes of 13 yards, 10 yards and 8 yards, in addition to hooking up with tight end Jordan Adams for a 26-yard pass en route to the game-sealing scoring play. A drive that lasted about four minutes culminated with a 2-yard touchdown run by Price, followed by a two-point conversion pass from Harding to Adams to give Douglass the 26-20 lead and 1:14 to go.

The number of returning players on the Eagles’ roster accustomed to being in stressful game situations prepared them for the late-game battle against Fairmont Heights, Pinkney said.

“I told them there was plenty of time on the clock. I said, ‘don’t panic, we don’t have to go into panic mode. We’re gonna make some things happened and were going to close this out.’ And the guys believed in it,” Pinkney said.

Fairmont Heights was left with only about a minute to respond and simply fell short. The Hornets were able to get to the 48-yard line; but on what was supposed to be a last-second desperation play, Bell was sacked by sophomore defensive end Camron Stroud as time expired to seal the huge away win for the Eagles.

“We knew Fairmont was going to come to play. We knocked them out the playoffs two years in a row so we know they wanted to get back real aggressive,” Harding said. “We came with the grind today… every play, every possession, I told my players 100% every play.”

Douglass’ big play down the sideline to Adams was one of the deciding factors, Fairmont Heights High School Head Coach Rodney Williams said, leaving the Hornets will little time to strike back. However, Williams expressed satisfaction that his team bounced back and took the lead against Douglass.

“This came down to who had the ball last,” Williams said. “Douglass is a good team, they don’t make many mistakes and we made the mistakes and still had a chance to win the game so that says a lot about our program.”

“We fought hard, but we just came short,” Fernandors, who finished with 96 rushing yards, said. “We got to lower our mistakes on defense and once we handle that we’ll be straight.”