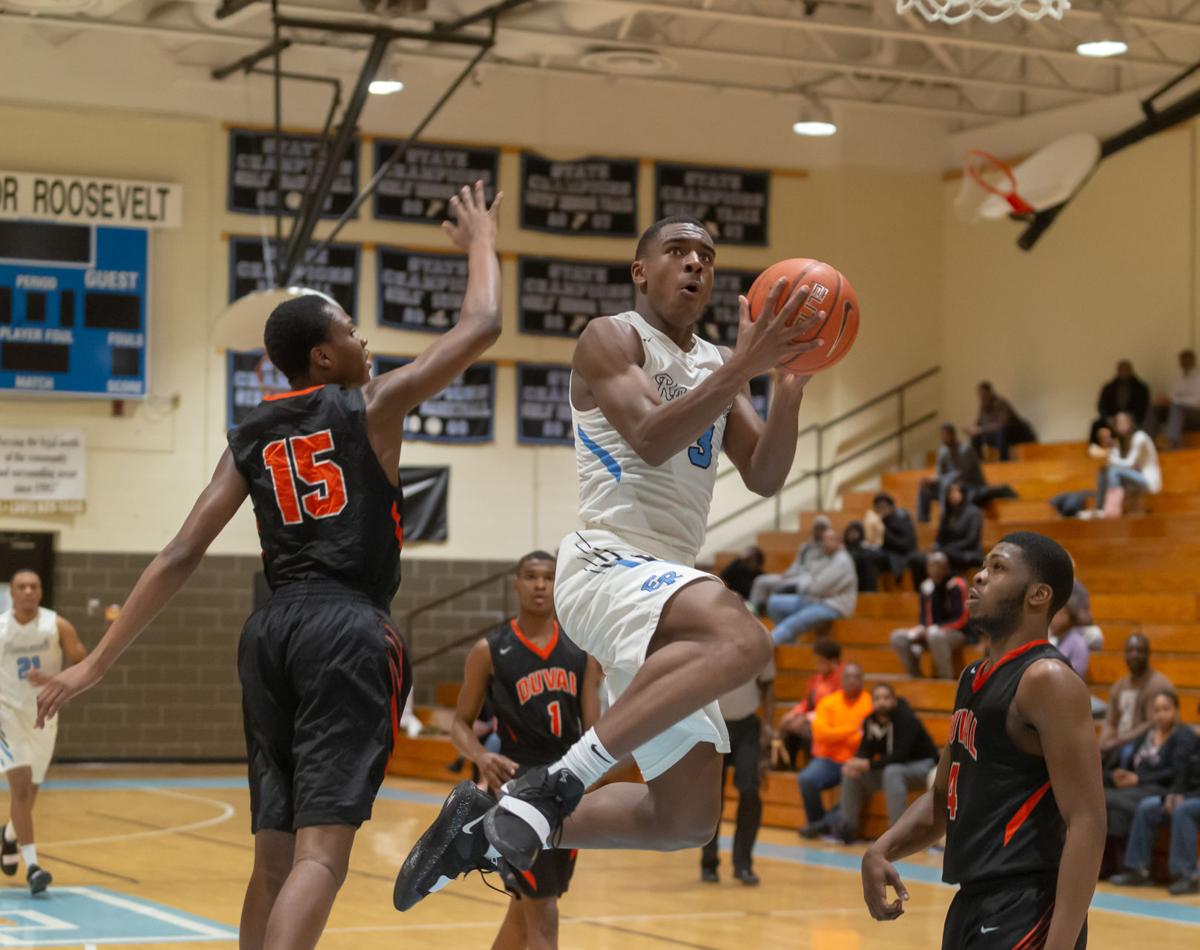 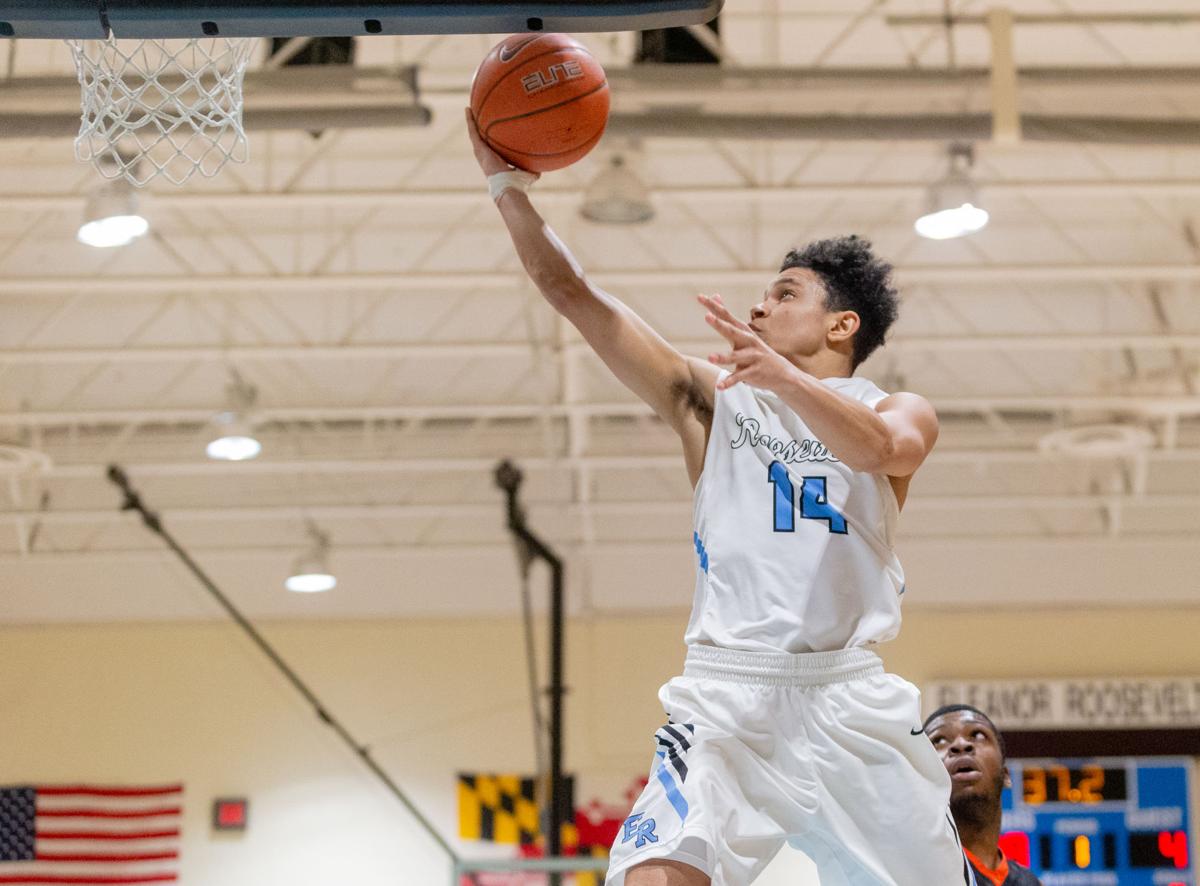 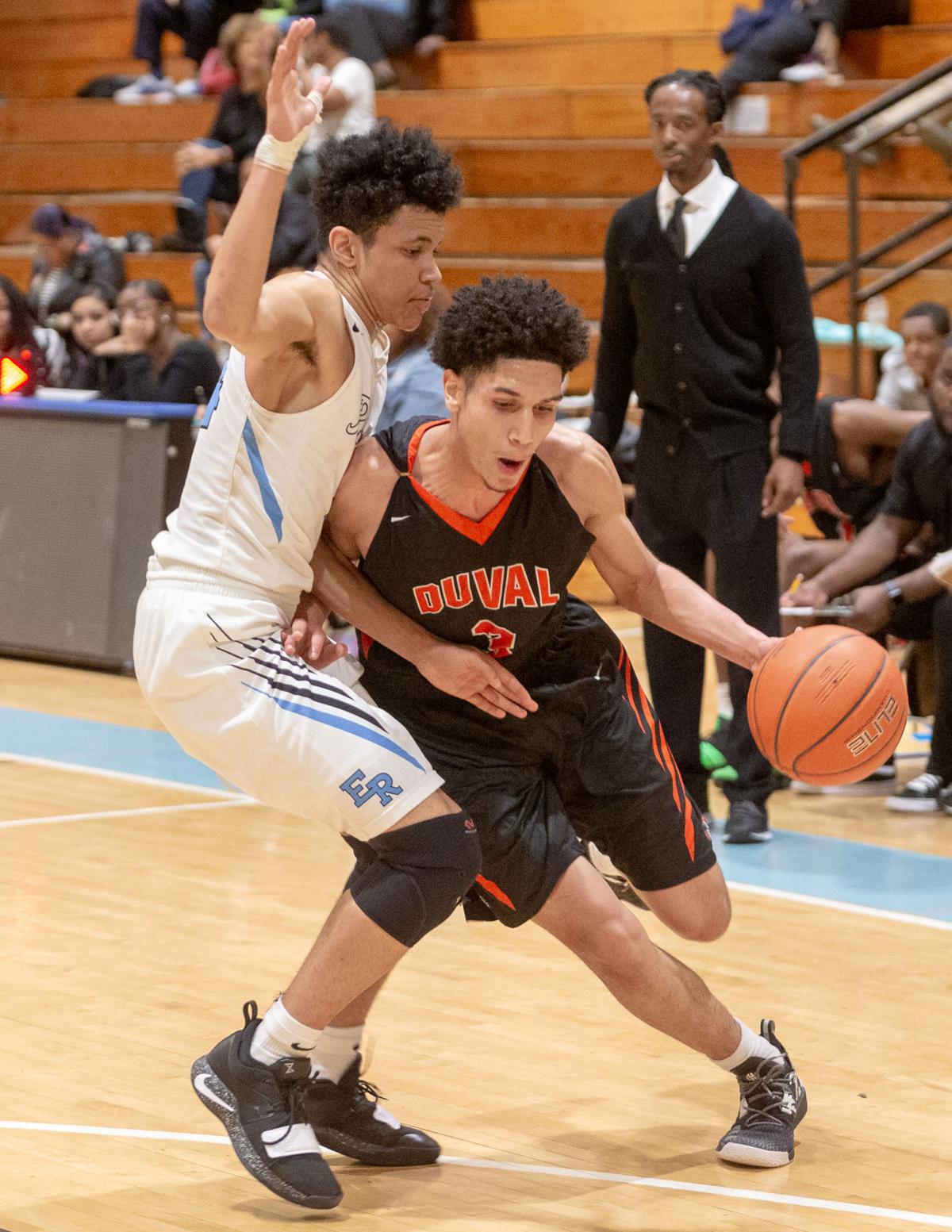 GREENBELT – The Eleanor Roosevelt High School boys basketball team has been on a tear lately as they dominated teams at will over the last couple of games. That streak continued on Feb. 7 with their third consecutive blowout victory of at least 20 points as they defeated DuVal High School 71-44.

[Missed the game? See highlights from Roosevelt’s win in our photo gallery here!]

“We really wanted to set a tone defensively tonight,” Eleanor Roosevelt Head Coach Brendan O’Connell said. “The first time we played time, we felt like our defense wasn’t what it needed to be. We know they are a good offensive team and they are good driving to the basket, so that was the main focus tonight. I think our guys did a really good job.”

Roosevelt showcased that defensive effort in the first quarter. They started the game on a 13-2 run and showed no signs of letting up. The Raiders were everywhere as they forced turnovers, grabbed defensive rebounds, dove for loose balls and played overall solid team defense. That early run by Roosevelt turned into a 21-4 run and ended the first period with a 21-6 lead.

“In the first quarter, we just clicked,” said senior wing guard Isaiah Gross, who finished 10 points, five rebounds and four assists.  “Once we started to get stops on the defensive end, it played easier for our offense to flow better. We set up each other well and made the extra pass. We weren’t being selfish on the offensive end. Passing up a good shot for a better shot made us successful on offense.”

In the second frame, Roosevelt continued to wreak havoc on the defensive end and was just as efficient on the offensive side of the ball as well.  They initiated a 17-4 run at the beginning of the quarter that had DuVal confused and lost on the hardwood. Everybody on the floor made contributions for Roosevelt, and it showed in the score as they went into halftime with a 41-13 lead.

“On the offensive side of the ball, I felt like we were getting to the rim at will and always making the extra pass to find the next teammate,” said senior guard Kyle Rose, who ended the game with five points, five assists, five rebounds,and two steals.

“On the defensive side, everybody was protecting the paint.  Also, we did good at boxing out and rebounding.  We just came out and executed everything. It was tough team to beat.”

Roosevelt slowed down a little bit with a comfortable lead in the second half.  In the third quartter, Roosevelt only outscored DuVal by a one-point margin (16-15).  They had more turnovers and did not score the ball as effectively as they did in the first half of the game.

“The difference in the two halves was our defensive intensity,” said senior guard Cameron Brown, who closed out the game with a game-high of 15 points to go along with seven rebounds.

“We came out wanting to make a statement.  We just wanted to get stops on defense and then continue to put a beatdown on them, and that’s what we did in the first half.  The second half, we still came out and got stops, but we weren’t as intense.  We just had to focus up for a minute and get back to what we do.”

DuVal played well in the final period as they came out on an 11-4 run, but it was too little too late.  DuVal outscored Roosevelt 16-14 in the fourth quarter, but Roosevelt kept it close enough where they did not let their lead dwindle away.  Junior guard Muhammed Yilmaz led DuVal in scoring with 15 points.

It proved to be an impressive overall win by Roosevelt as everybody that played on the team scored at least one basket.  With the playoffs right around the corner, O’Connell knows that Roosevelt still has some work to do.

“We are just trying to get better each day,” O’Connell said. “We have to keep getting better at everything. Our defense played good tonight, but we can get better.”