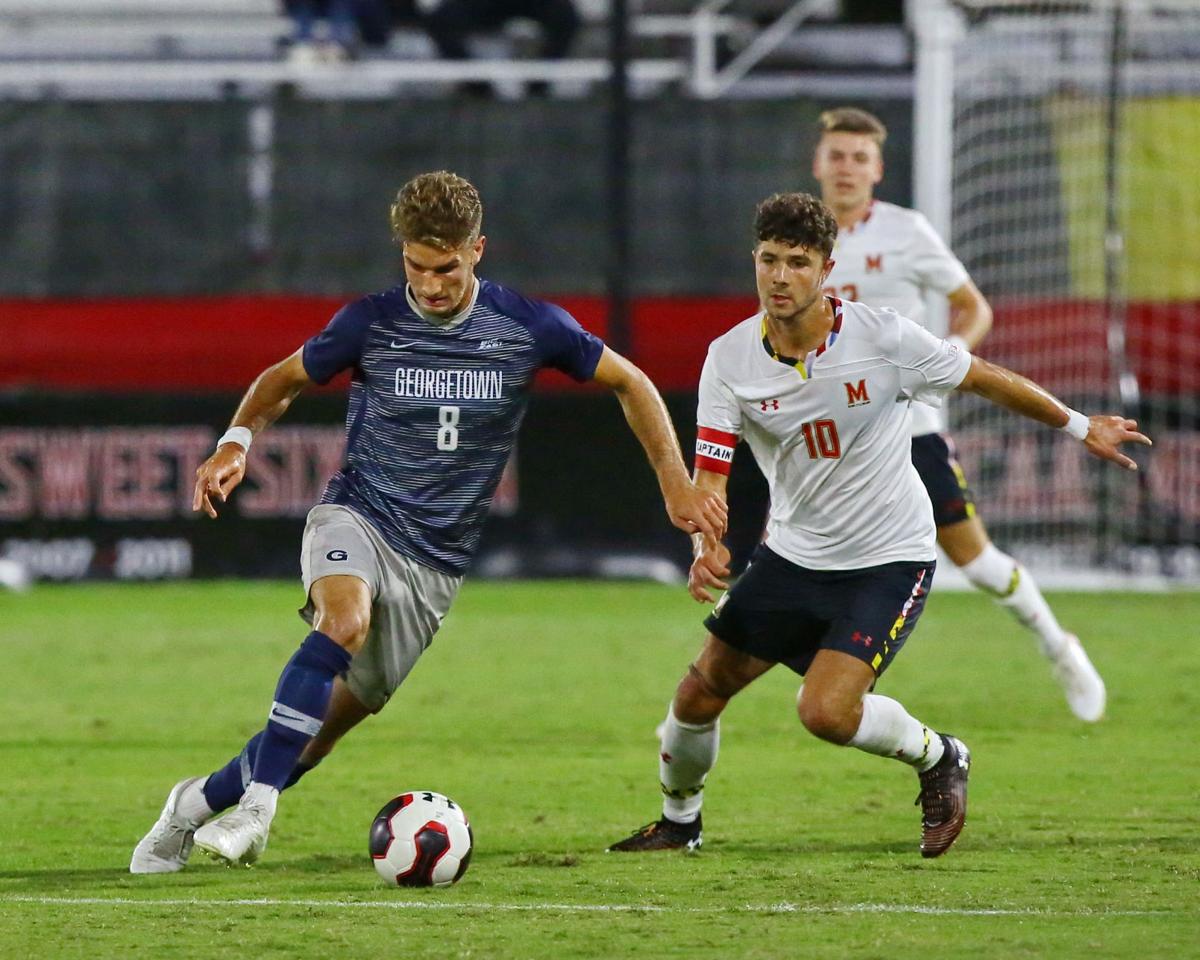 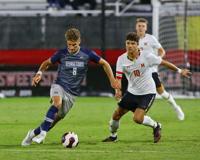 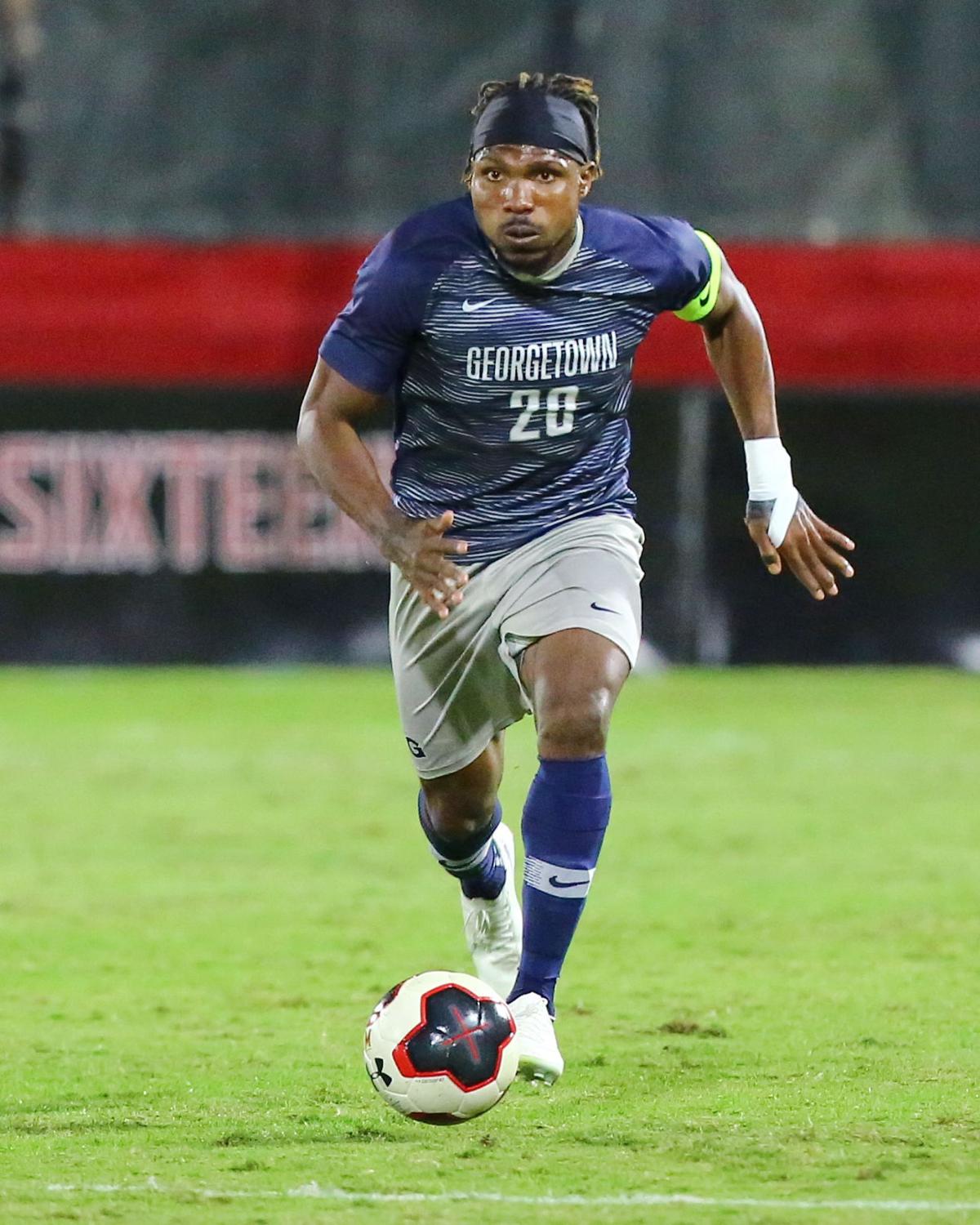 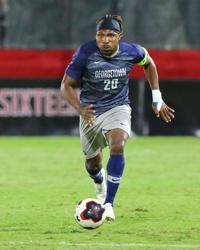 October 14, 2019: Georgetown’s Achara (20) brings the ball up the pitch for the Hoyas during a college soccer game against the University of Maryland in College Park. Photo by Photo by George P. Smith/The Sentinel Newspapers.

October 14, 2019: Georgetown’s Achara (20) brings the ball up the pitch for the Hoyas during a college soccer game against the University of Maryland in College Park. Photo by Photo by George P. Smith/The Sentinel Newspapers.

COLLEGE PARK – The No. 12 Georgetown University Men’s Soccer team displayed more energy and held their own against last year’s College Cup champions as No. 25 University of Maryland struggled to keep up in a 1-0 loss in College Park on Oct. 14.

[View photos from Maryland vs. Georgetown in our photo gallery here!]

The gassed Terrapins squad had trouble keeping up with a Georgetown team that was quicker and more reactive. Maryland’s attack also struggled against the Hoyas defense that suffocated them into turnovers.

As the game went on, missed opportunities weighed heavy on a Terrapin squad that was at a loss of scoring opportunities.

“As the game progressed, I think Georgetown’s depth and quality started to take over the game,” said Maryland Head Coach Sasho Cirovski. “We got a little bit more spread, our inability to hold the ball in attacking positions and to cause unforced turnovers started to wear us down.”

Georgetown (10-1-1) carried the momentum in the first half, putting the Terrapins in the backfield to force them to play more defensively. The Maryland defense was able to keep the Hoyas at bay for the entirety of the first half.

Outshot five-to-two, the Terrapins contained some of the most potent attackers on the Hoyas’ squad in the first half.

Defender Daniel Wu moved up and was in prime position for some of the balls that came his way, while Ifunanyachi Achara made moves on the wings but was kept in check by the Maryland backline.

Maryland (6-4-2) had the first shot of the game, an early opportunity by midfielder Eli Crognale that went high and was recovered by Georgetown goalkeeper Tomas Romero.

It was not until 37 minutes later that Maryland would have another shot. This time, it was midfielder David Kovacic who floundered a shot on goal after a pass by striker Fola Adetola hit his feet. In between the Crognale and Kovacic misses in the first half, Georgetown had several shots and was largely unthreatened by Maryland.

The heavy Georgetown pressure also carried with it more fouls: the Hoyas had four in the first half compared to Maryland’s two.

“I thought we played a very good 45 minutes, and credit to Georgetown they came out, played very hard, played a full 90 (minutes). Credit to them, they’re a very good team,” said Maryland defender Nick Richardson.

Richardson noted the two-day recovery period that Maryland had after a road game against Michigan State on Oct. 11 that was played in heavy rains before it was called off. Georgetown also had the same amount of time to recover after a game on the same date against Seton Hall, but they did not travel nor deal with weather issues.

The second-half collapse was not evident immediately, as Maryland started with a shot by midfielder Justin Harris that went far above the crossbar. Eric Matzelevich fed Harris the ball after being covered by Georgetown defenders and Harris, in a wide-open goal with only Romero in between him and the goal net, could not finish what would have been a momentum-shifting goal.

In the 64th minute, midfielder Paul Rothrock and Achara assisted forward Derek Dodson with the first and only Hoyas goal by passing around each other near the penalty area, duping the Maryland defense and allowing Dodson to fire one past goalkeeper Niklas Neumann.

With the clock winding down, Maryland sought a chance to score but was met by a Georgetown team that was refreshed. The Hoyas had 11 shots compared to the Terrapins’ three. Georgetown also received the sole yellow card of the game, awarded to midfielder Dylan Nealis.

“I thought we competed hard, we competed well, we just didn’t have enough left in the tank in the second half, it just wore us down,” said Cirovski.

Next up for Maryland is Indiana University on Oct. 18. The Hoosiers are undefeated in conference play, while the lone Terrapin conference win was against Rutgers on Oct. 2.

“Every game now has playoff implications so we have to take each one game by game,” said Maryland defender Ben Di Rosa. “And know that if we get a big result on Indiana (University), we can take it from there and keep going.”