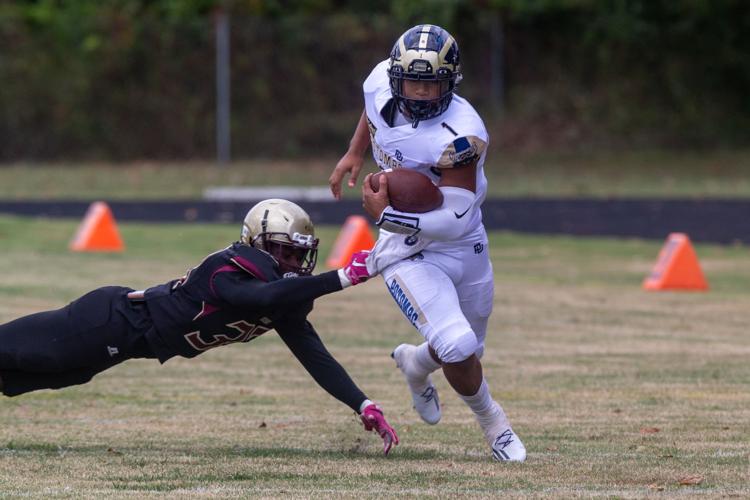 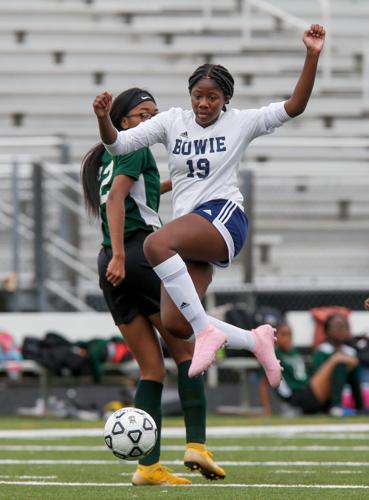 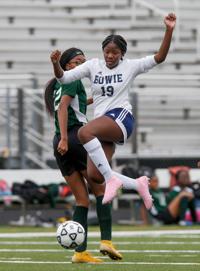 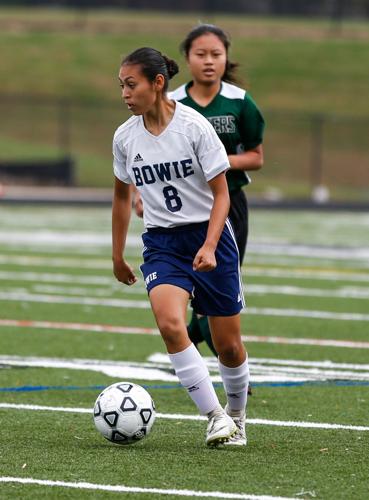 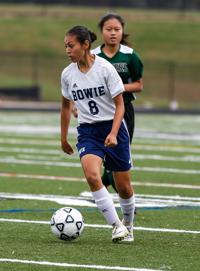 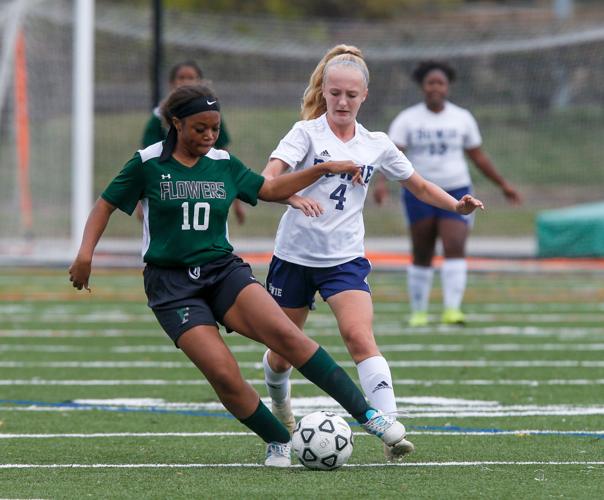 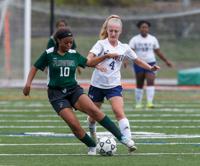 October 26, 2019: Unity Dill (10) of Flowers looks to keep the ball away from Skylar Williams (4) during a MPSSAA 4A South Region girl’s soccer playoff between Bowie and C.H. Flowers at C.H. Flowers High School in Springdale. Photo by Michael R. Smith/The Prince George’s Sentinel.

October 26, 2019: Unity Dill (10) of Flowers looks to keep the ball away from Skylar Williams (4) during a MPSSAA 4A South Region girl’s soccer playoff between Bowie and C.H. Flowers at C.H. Flowers High School in Springdale. Photo by Michael R. Smith/The Prince George’s Sentinel.

OXON HILL – The Potomac High School football team’s seniors made sure their final game on their home turf was one to remember.

It took standout Dominique Anthony a while to get going, but the senior quarterback completed 13 of 25 passes for 298 yards and three touchdowns to go with a rushing touchdown to lead the Wolverines to a 40-7 home win over Charles Milton Wright (Bel Air) on Senior Night on Oct. 25.

Senior wide receiver Corey Dyches, a University of Maryland commit, also made pivotal plays on offense as he finished the night with four receptions for 120 yards and two touchdowns, while the Wolverines defense forced three turnovers to contribute to Potomac’s third straight victory.

“I knew this was going to be my last time (ever) being home. I wanted to go out with a bang,” Anthony said. “This is really going to help us with the seeding going into the playoffs.”

C.M. Wright controlled the game clock exceptionally well early on to limit Potomac’s chances of getting the ball and gaining early momentum. The Wolverines only had one drive in the first quarter that resulted in a turnover on downs.

Potomac’s (7-1) first scoring play occurred with 9:43 remaining in the second quarter when Dadrian Carter-Williams ran in a 16-yard touchdown to give the Wolverines a 6-0 lead. After stopping the Mustangs again, Anthony made key plays to get Potomac to their opponent’s 29-yard line.

Short carries by Carter-Williams and an incomplete pass by Anthony brought up a 4th-and-6 situation, which wound up being the Wolverines’ second and final turnover of the evening after Anthony’s pass was batted down by a Mustangs defender.

They extended their lead to 13-0 on a crowd-erupting play between Anthony and wide receiver Daemon Dawkins with a little more than two minutes to go in the second, giving the Wolverines pretty good footing heading into halftime.

However, C.M. Wright would not relinquish. Quarterback Hunter Wright lobbed a 24-yard pass to Kristopher Moreno to make it 13-7 at halftime.

The Wolverines offense started a little slow, said Potomac Head Coach Ronnie Crump, but never looked back once they found their rhythm in the second half.

“I feel like our offense had carried us so long, and they came out a little lethargic. In the second half, they picked up the energy,” Crump said. “The offense just had to get in a rhythm.”

About a minute into the second half Anthony found Dyches for a 16-yard touchdown, and after forcing another C.M. Wright turnover, Anthony rushed in for a one-yard quarterback sneak as the lead inflated to 27-7 approaching the fourth quarter.

On the opening play of the fourth, Potomac cornerback Eric Branch caught an interception to feed into his team’s momentum. Not long after Branch’s pick, Anthony hit Dyches again for a 26-yard touchdown to make the score, 34-7, virtually putting the game away with about seven minutes remaining.

Despite the penalties that affected Potomac’s offense early, Crump acknowledged Anthony’s proficiency and focus en route to carrying his team to the win, in addition to a defense that held C.M. Wright scoreless for three quarters.

“He’s been a three-year starter and he’s gotten better every year… he’s been in the offensive system for three years and he’s mastered it,” Crump said of Anthony. “Once you have a quarterback that not only knows not to get the ball to not just Corey Dyches but knows how to spread the ball around it makes him dangerous.”

The Mustangs relied on running back Lance Lehmann, listed a 6-foot-4 and 240 pounds, for most of its offense all night. The senior racked up a game-high 137 yards rushing on 21 carries. Wright was 4 for 12 and recorded 40 yards, a touchdown and two interceptions as the Mustangs fall to 4-4 with the loss.

C.M. Wright Head Coach Jim French, who is in his 25th year with the program, but his first as a head coach, said the Mustangs have to do better with offensive reads. His team controlled the ball early, he said, but did not execute for the duration of the game, which ultimately hurt them in the end.

“Coming in here tonight we knew we were going to be facing a phenomenal football program,” French said. “They have a great reputation; they have a great offense, well-coached (and) a great disciplined program as well. We knew we had our work cut out for us.”

Potomac will head to Gwynn Park on Nov. 1 at 6:30 p.m. hoping to pick up its fourth straight win.