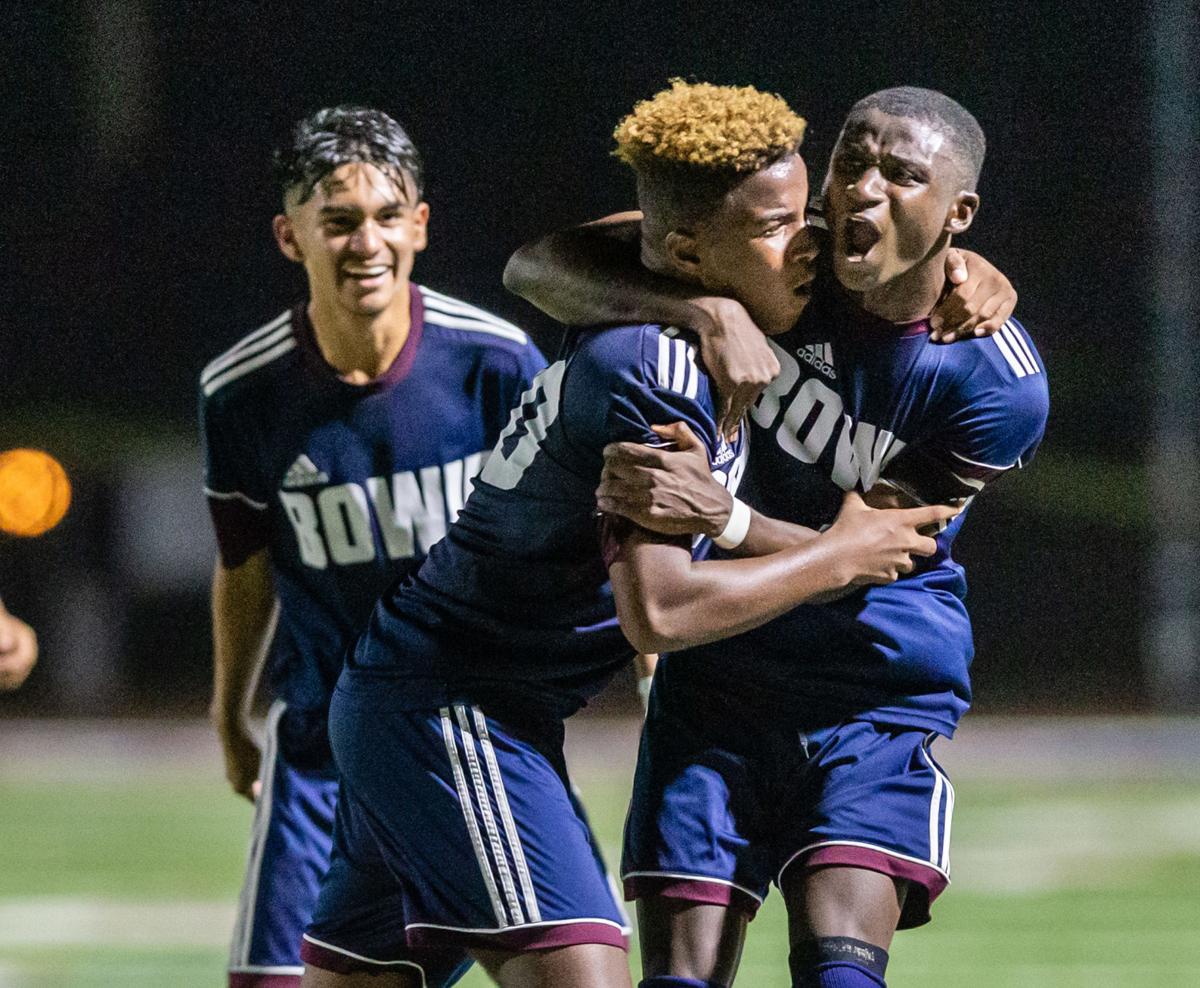 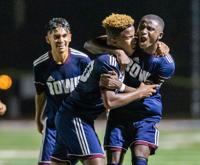 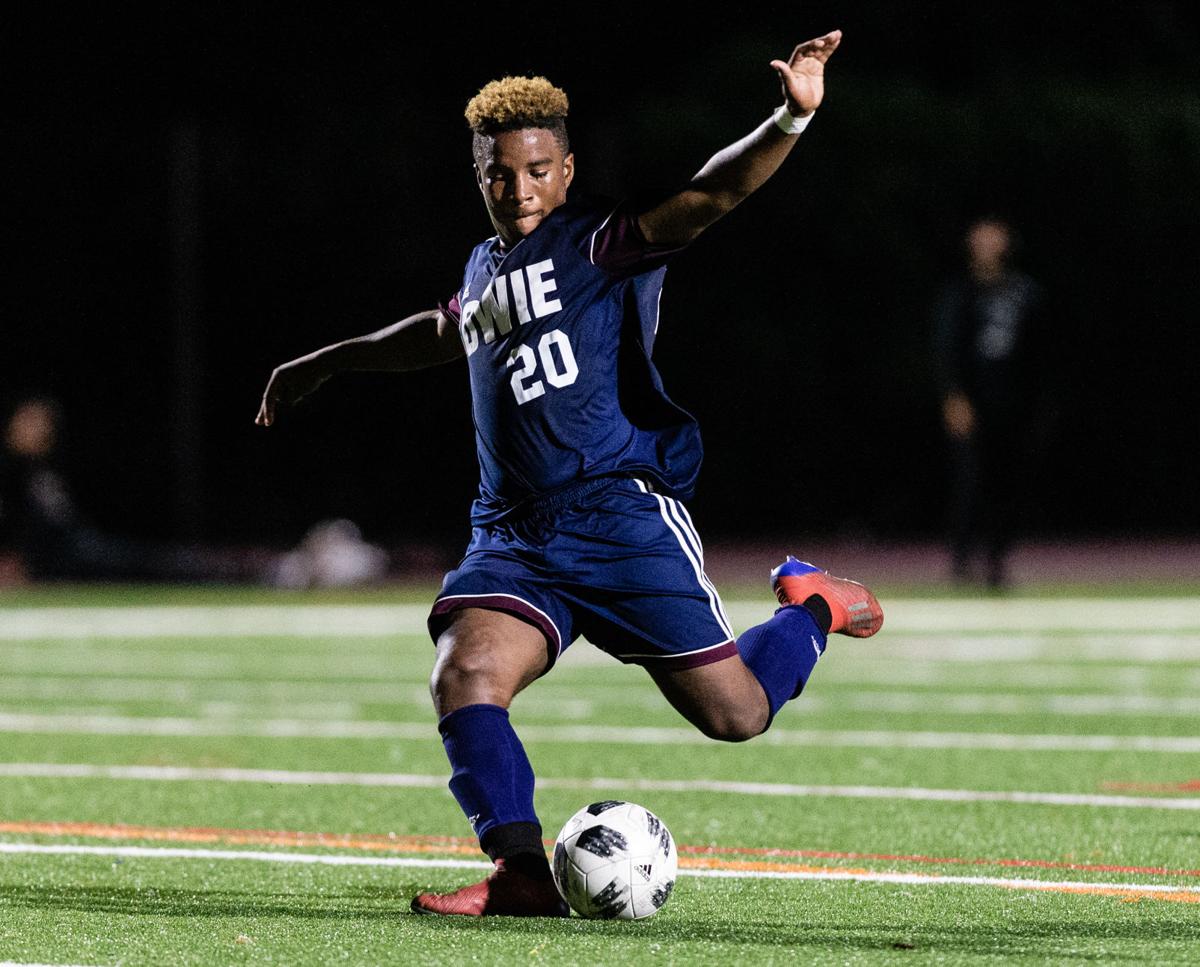 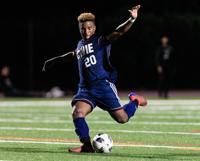 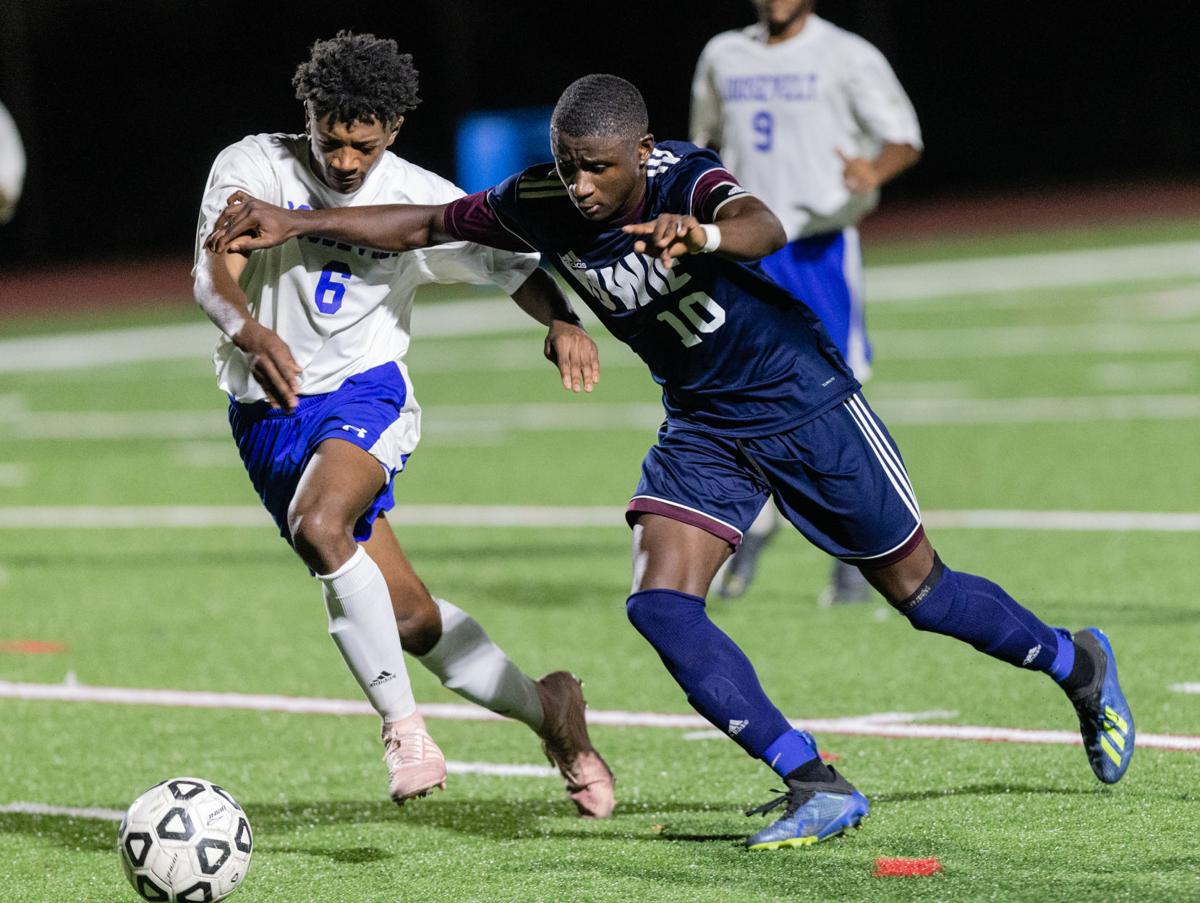 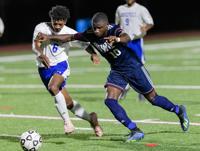 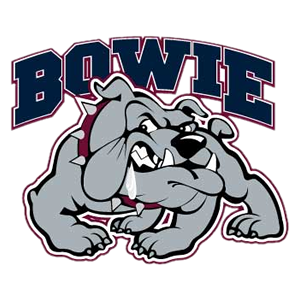 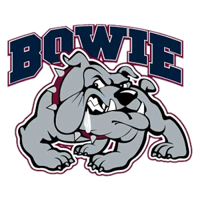 BOWIE — Bowie High School boys’ soccer freshman Kareem Davis had not scored a goal this season coming into the Oct. 7 match against Eleanor Roosevelt High School. Davis broke onto the score sheet early in the second half, and with about seven minutes left, possessed the ball around the right side of the field about 15 yards from the goal.

Davis dribbled once to his left and then fired a shot that bounced into the goal. His teammates jumped off the bench and sprinted towards him, ecstatic that he had made the big play for his second goal of the game. The strike gave Bowie a commanding 3-1 lead and sealed a win over their long-time rivals.

“That feeling was crazy,” Davis said. “It was like being on top of the world because I’m a freshman on varsity and when you score that and see all the other guys who are seniors and juniors really believe in you, to score that goal especially against our rival is crazy.”

Davis helped power a comeback effort for the Bulldogs, who scored three second-half goals after Eleanor Roosevelt took the lead in the opening minutes of the second period. He scored the game-tying goal and eventually the goal that would put away the game for good.

With 25 minutes in the second half, sophomore defender Jesse Villanueva curled a free-kick 30 yards out into the box, which Davis headed in. In a foreshadowing of what would happen when he scored later in the game, Davis was mobbed by his teammates after tying the game.

Davis’s oldest brother KJ was a freshman on Bowie’s last state championship team in 2011, and his other brother Kyle is currently a freshman striker for Mount St. Mary’s.

“Every day he comes to practice trying to best his other two brothers,” Bulldogs Head Coach Frantz Deetjen said. “He looks at his oldest siblings and sees ambition and wants to push himself to be at the level they were.”

The goal opened the floodgates for Bowie (7-3), who controlled possession of the ball for most of the second half after both teams had solid bouts where they controlled the run of play in the first half.

However, it was Eleanor Roosevelt (2-5-1) who would get on the board first. Miscommunication by the Bulldogs’ defense allowed Raiders striker Basil Ekokwe to intercept a pass about 30 yards from the goal, and then he dribbled to his left side and scored. Ekokwe would have to leave the game with a concussion less than two minutes later. The injury changed things dramatically for the team, Raiders Head Coach George Kallas said.

“In the old days, we would say he’s playing as a man amongst boys,” Kallas said. “He has the physicality of an adult playing a boy’s game. My next striker’s a ninth grader. We’re very young.”

The best opportunity came a few minutes after Davis’s tying goal. With 20:45 remaining, senior William Lazo had a good look but sent it wide. Sophomore Kiran Lutchman corralled the rebound, sending a cross from the right to left that drifted out of bounds. Seven minutes later, Eleanor Roosevelt’s defense collapsed on Bowie senior Michael Adekanmbi, leaving Matthew Emaikwu wide open. Adekanmbi threaded it through to Emaikwu, who scored the go-ahead and eventual game-winning goal.

“I just think after the first goal came in we all came together and dug deep and decided it was our game to win,” Davis said. “As soon as that happened, everything started to click and you could see the energy build in people and the belief. Once the tying goal we just had the energy and played the rest of the game with it.”

As a program that has won nine state championships, Bowie once again has high expectations. Deetjen told his team after the game that the regular season is like the preseason, as winning in the state tournament is what really matters.

“This win means a lot,” Emaikwu said. “But in the grand scheme of things, if we don’t get to the championship or win in the playoffs, it’s nothing.”