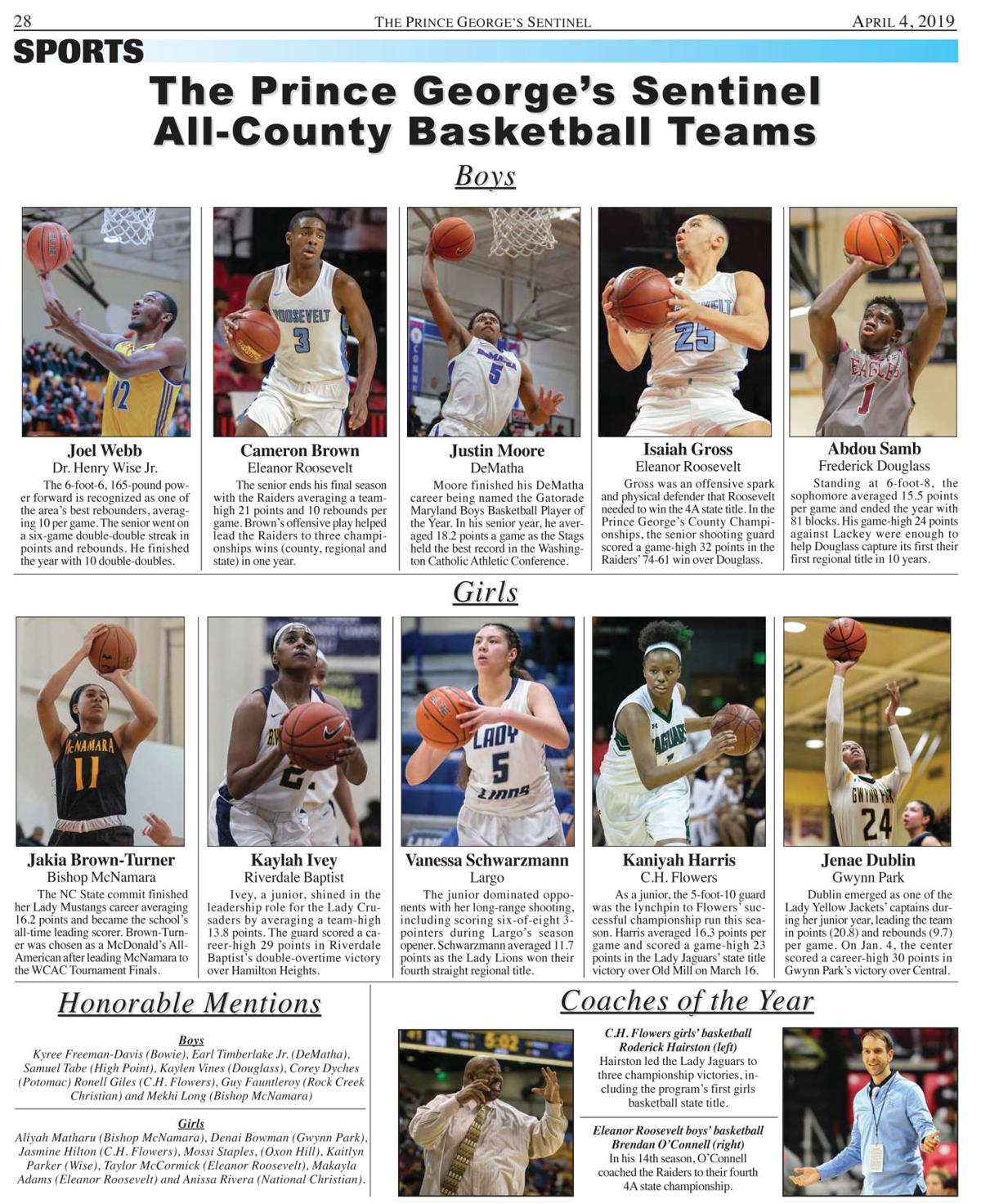 Justin Moore (DeMatha): Moore finished his DeMatha career being named the 2018-19 Gatorade Maryland Boys Basketball Player of the Year. In his senior year, he averaged 18.2 points as the Stags held the best record in the Washington Catholic Athletic Conference.

Joel Webb (Dr. Henry Wise Jr.): The 6-foot-6, 165-pound power forward is recognized as one of the area’s best rebounders, averaging 10 per game. The senior Pumas went on a six-game double-double streak in points and rebounds. He finished the year with 10 double-doubles.

Isaiah Gross (Eleanor Roosevelt): Gross was an offensive spark and physical defender that Roosevelt needed in winning the 4A state title. In this year’s Prince George’s County Championships, the senior shooting guard scored a game-high 32 points in the Raiders’ 74-61 win over Douglass.

Abdul Samb (Frederick Douglass): Standing at 6-foot-8, the sophomore averaged 15.5 points per game and finished the year with 81 blocks. His game-high 24 points on March 8 against Lackey were enough to help Douglass capture its first their first regional title in 10 years.

Coach of the Year: Brendan O’Connell (Eleanor Roosevelt) In his 14th season, O’Connell coached the Raiders to their fourth 4A state championship.

Kaniyah Harris (C.H. Flowers): As a junior, the 5-foot-10 guard was the lynchpin to Flowers’ successful championship run this season. Harris averaged 16.3 points per game and scored a game-high 23 points in the Lady Jaguars’ state title win over Old Mill on March 16.

Kaylah Ivey (Riverdale Baptist): Ivey shined the leadership rule for the Lady Crusaders by averaging a team-high 13.8 points per game this season. In the first round of the 2019 National Association of Christian Athletes Tournament, the guard established a new career-high by registering 29 points in Riverdale Baptist’s win over Hamilton Heights.

Jenae Dublin (Gwynn Park): Dublin emerged as one of the Lady Yellow Jackets’ captains and lead the team in points (20.8) and rebounds (9.7) per game. On Jan. 4, the center scored a career-high 30 points as part of a double-double performance in Gwynn Park’s victory over Central.

Purchase your copy with the All-County Basketball Teams today at your local 7-Eleven locations!