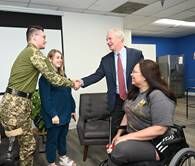 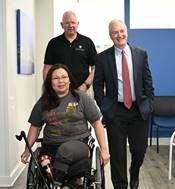 Provided by the office of Senator of Van Hollen. 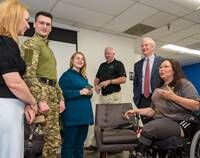 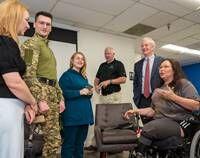 Provided by the office of Senator of Van Hollen.

WASHINGTON – Tuesday, U.S. Senators Chris Van Hollen (D-Md.) and Tammy Duckworth (D-Ill.) met with Ukrainian soldier Oleksandr Chaika, who is receiving care at the Medical Center Orthotics and Prosthetics (MCOP) in Silver Spring. Oleksandr, a Ukrainian athlete, choreographer, acrobatics coach, and teacher joined the Ukrainian military shortly after Putin announced his war on Ukraine. Oleksandr was deployed to the Luhansk region where he lost his leg to an explosive. With assistance from Senator Van Hollen’s office to arrive in the United States, Oleksandr has now received a prosthetic leg as part of MCOP’s Operation Renew to serve Ukrainian military personnel. On Tuesday, Senators Van Hollen and Duckworth toured MCOP, met with Oleksandr, and highlighted the continued need for U.S. support for the people of Ukraine.

“The people of Ukraine have inspired the world in their valiant defense against Putin’s unprovoked war. We are moved by their courage, and it was an honor to join Oleksandr to express our gratitude for his service and the service of so many Ukrainian men and women who are fighting in the name of freedom, democracy, and the sovereignty of their nation. I was proud to help facilitate Oleksandr’s journey to the United States, and I’m glad to see him receive such dedicated care here in Maryland from the team at Medical Center Orthotics and Prosthetics, who also have provided care to many of our wounded warriors at Walter Reed. As we emphasized to Oleksandr, the Ukrainian people have our full support, and we will continue fighting to provide the resources they need to stand firm against Russia’s aggression,” said Senator Van Hollen.

“It was an honor to meet with Oleksandr—not just to be able to thank him for his sacrifices during Putin’s unjustifiable war, but also to speak with him about the recovery process as he learns to walk with his new leg. With his impressive attitude and personality, as well as the skilled care he’s receiving at Medical Center Orthotics and Prosthetics, I have no doubt he’ll be able to do everything he wants to in life after losing his leg. For our part, we must continue to support the Ukrainians and provide them the resources they need to defeat Putin on the battlefield, reclaim Ukraine’s territorial sovereignty and protect its people and its right to self-governance. We can’t give up on them now,” said Senator Duckworth.

Oleksandr said, "I want to thank Senators Van Hollen and Duckworth for coming to MCOP and spending time with me and my wife Anna. Thank you for America's incredible help in this war. It helps very much for us in battle to know that we have the support of your great country! I also want to thank Mike Corcoran and everybody from MCOP for giving me this new leg. It will change my life. I also want to thank the Future For Ukraine Foundation and all the Americans who arranged for me and my wife Anna to come here and help us while we're here. Thank you all!"

“Medical Center Orthotics and Prosthetics is honored and proud to be able to help Ukrainian wounded warriors who are fighting for democracy and freedom. Our experience in treating US Service Members at Walter Reed National Military Medical Center for the past 17 years with complex battle injuries has allowed us to provide state of the art functional prosthetic limbs for those severely injured Ukrainians Soldiers. We were honored to host Senator Van Hollen and Senator Duckworth at our headquarters in Silver Spring Maryland to meet with Oleksandr Chaika who received his prosthesis and is currently undergoing rehabilitation here. Senator Van Hollen was instrumental in arranging the documentation necessary to help bring him over from Ukraine. Tuesday’s event highlighted the need for these wounded warriors and the care that they are receiving here in Maryland. MCOP is committed to treating five more Ukrainian wounded warriors with serious injuries and high-level amputations,” said Mike Corcoran, co-founder of MCOP.